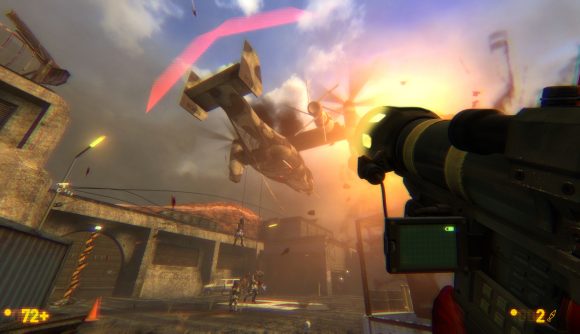 Depending on how you reckon it, Black Mesa has been in some state of development for a full 15 years, going back around to when Half-Life 2 came out. Now you can finally play it beginning to end, although the developers caution that it’s still in what they consider a beta state.

“The whole of Black Mesa, from beginning to end, is available on ‘public-beta,'” the developers write in a new post to the Black Mesa Steam page. “We are so pumped to have this out. We appreciate the feedback from the community; as we said before, it has proved invaluable.”

Crowbar Collective has stitched together the full reimagined Half-Life campaign, including the final Xen and Gonarch’s Lair areas that entered beta earlier this year.

With Half-Life: Alyx due out early next year, there’s no better time than the present to get refamiliarised with the Half-Life universe. Heck, it’s been long enough since the original game came out that plenty of readers may never have gotten a chance to play the original game, which – although revolutionary at the time – can feel mighty clunky by modern standards.

To opt into the beta branch, first you’ll need to have purchased Black Mesa on Steam. Once it’s in your library, right click on its entry and select ‘Properties’ from the drop-down menu. Then, select the ‘Betas’ tab in the menu, and click on ‘public-beta.’ This will activate the public beta branch and the additional game files should automatically start downloading.

Once you’ve got the public beta installed, you’ll be able to play through to the end of the game, including the fights with the Interloper and the Nihilath boss battle, which have been added along with a long list of various and sundry tweaks and fixes.

Crowbar Collective has also included a list of known issues to look out for in the beta, including uneven difficulty, performance issues, and sequence breaking in the factory maps. The developers say they’ll be looking at feedback and player data from the beta to help tune the game for its full launch.