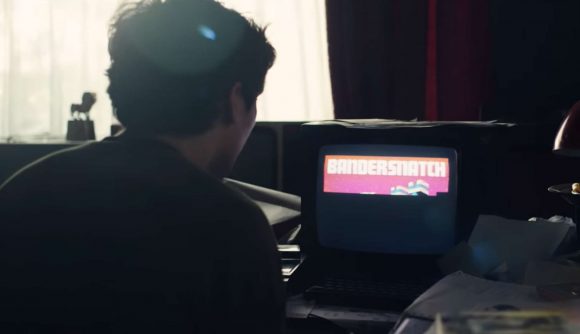 Charlie Brooker, the creator of the dystopian TV series Black Mirror, discovered new things to fear about technology as he was writing the script for  Bandersnatch: as he tried to get his story outline into Twine, the program would crash.

“That was the first sign that I shouldn’t have bothered,” he joked in a recent appearance on RHLSTP, comedian Richard Herring’s podcast. “What was weird is, usually when you’re writing a script, sometimes you hit a point where you get into it, and it gets longer and longer. And this [Bandersnatch script] got longer sort of horizontally as well as vertically.”

Of course, since Bandersnatch is an interactive game as much as an episode of television, it wasn’t simply a matter of writing a linear narrative – Brooker had to keep track of each narrative thread created whenever a player makes a decision, and keep track of how those decisions interacted with the rest of the story. The complex nature of Bandersnatch’s story concept was what led him to pick up Twine to begin with – he explains to Herring that he needed a tool that could organise the script like a flow chart.

But what might be most surprising about the interview is Brooker’s revelation that portions of his original Twine coding wound up in the final version of Bandersnatch that now lives on Netflix’s servers – when you fire up Bandersnatch, you’ll be playing some of the script as he wrote it.

“Because Netflix is so fucking clever, they invented this whole bit of software that we could literally sort of import my code and the script into, and we could drop video clips into,” he said. “So some of the stuff that actually plays on the service is based on little logic fucking gates, effectively, that I was setting up,” he said.

You can listen to the entire interview over at the official RHLSTP site. If you subscribe to the podcast, it’s episode 268, and the conversation about Bandersnatch begins around the 33 minute mark. Bandersnatch is available now on Netflix.