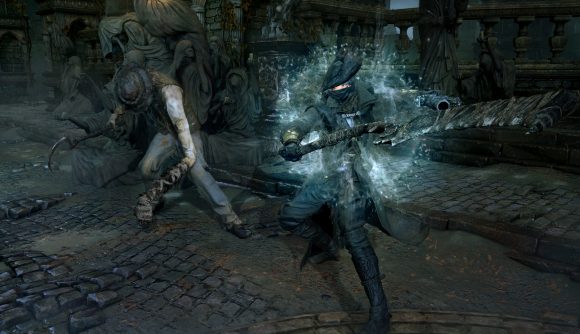 Insider speculation is mounting that Bloodborne is getting a PC port alongside a remaster for the PlayStation 5. According to rumors, the re-release of From Software’s gothic horror was due to be announced at the now rescheduled PlayStation 5 livestream event.

Two separate gaming personalities, as compiled by PCGamer, have stated that a Bloodborne remaster will be coming to PC. The first was streamer CaseyExplosion, who put out an open plea for solid Bloodborne information in return for a $100 donation to charity. She says a trusted source took her up on the offer, and gave reliable intel that the PS5 event would’ve announced a Bloodborne remaster for Sony’s next console and PC.

The second is Youtuber PC Gaming Inquisition, who named Bluepoint Games and QLOC as the teams in charge of the remastering. Both are believable candidates, since Bluepoint handled the Shadows of the Colossus remaster from 2018, and QLOC worked on Dark Souls Remastered. Casey corroborated QLOC’s involvement, and PC Gaming Inquisition also added it’d be coming to Steam. Other well-known pundits, like Wario64, have nodded towards something coming sooner rather than later.

Another PS4 exclusive, Horizon Zero Dawn, has a PC port coming out this summer, and Death Stranding, one of the most anticipated exclusives of this generation, made the jump too. Bloodborne has been a coveted entry in the PS4’s library for PC players since launch. A port would create a lot of fanfare.

Alas, though, until the PS5 event is given a new date and broadcast, we’re still just waiting and hoping. In the meantime, why not give our list of games like Dark Souls: Remastered a look, if you’ve an itch to scratch, or the other best RPGs available right now on PC.