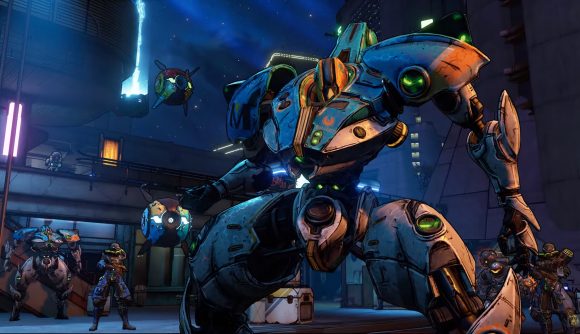 Chris Brock, Gearbox senior product producer and one of the key figures behind Borderlands 3, spoke to us at Gamescom about the challenges of finding a good time to announce a game and the new normal of unending development cycles.

Brock discusses waiting several years before revealing Borderlands 3, and the perils of striking at just the right time so that anticipation hasn’t grown stale. “it doesn’t feel like there’s anything that great that can happen by saying ‘in three years we’ll have a game.’ It doesn’t feel like there’s any benefit to that,” he tells us. “People can be excited, and then you disappoint them by telling them how far away it is. Or you don’t say anything for too long, and they think ‘cool, that’s vaporware, we don’t believe that exists anymore’. We wanted to not show up until we were ready to really show up.”

He wasn’t kidding, Borderlands 3 wasn’t shown to anyone until March this year, a cool four years on from Borderlands: The Pre-Sequel. But sure enough, it just made all the buzz that much greater.

No, Borderlands 3 will not have early access as Gearbox didn’t want to disappoint players by making them wait.

The games industry has shifted quite a lot since Borderlands first had us becoming Vault Hunters in search of lovely loot in 2009. Now, post-release content is a given for just about any title, and that means actually shipping the game is often just the tip of the iceberg.

“It used to be that the game went gold, and then you’re done,” Brock continues. “And that’s just not true anymore. Now that means it’s going to be printed, and it wouldn’t be a modern day game without arriving with a patch, and you work on the PC version for as long as you can because it’s all digital now. ‘Hey, it comes out on the 13th? I guess we can work until the 11th.’ We want to have a lot of support for the game pretty quickly.

“We understand that you’ve got this expectation that there will be content close to launch that will extend the game’s life, where you keep drip-feeding free stuff into the game so that people will have something to engage with. It’s like we’re done, except we’re not. You’re not really done ever anymore.”

Players can resume their vault-hunting when Borderlands 3 launches September 13, 2019.