Some time in 2010, three of my friends drove to my house, each with a copy of Borderlands, a PlayStation 3, and a TV. This was before flat screens were widespread, so the logistics involved a fair bit of sweat. We linked everything together and sat cross-legged or on footstools on my living room floor, sipping beer and loot-shooting across Pandora together. It was brilliant, and remains one of my favourite gaming memories.

We made lots of progress but didn’t finish, and when I picked it up solo in the following weeks, the difference was profound. Without friends or a gentle buzz to help the humour along, I found Borderlands pretty boring. Pandora is a bleak and unvarying planet, and without three people to share the attention of its hostile, bullet-sponge inhabitants, fights became far more challenging and laborious.

I clearly recall Brick’s weary sigh – “drive on, drive on” – as he clambers into a vehicle. Isolated, mournful guitar chords twang with endless vibrato as if echoing through Pandora’s empty canyons. All around me is desert and wasteland, peppered with forts made of junk, populated with identical bandit clans. What was first atmospheric has become overfamiliar and lonely after dozens of hours. I’m as tired of it all as Brick.

I skipped Borderlands 2 and the Pre-Sequel because of this, but I only have to recall that co-op session to think fondly of Borderlands as a series. As such, it didn’t take much to get me ready – even excited – to jump back in with Borderlands 3. As a further point of context: I have played a hell of a lot of Destiny since 2010, and indeed went directly from a lengthy session in Bungie’s loot shooter to starting my first character in Gearbox’s. Borderlands is rightly viewed as a catalytic influence on its genre, but that genre has moved on. Has Borderlands?

Borderlands 3 has some definite advantages – over Destiny, over its predecessors, and in general. Playing alone is less painful than I remember in the original, because of FL4K – a towering robot whose pets can draw enemy aggro. As Ali says, he’s a far better solo class than even the tanky Brick in Borderlands 1, and so far I’ve had no frustrating fights in which I do nothing but change cover and ‘fight for my life’.

That’s also thanks to that essential ingredient of a loot shooter: the loot. I’ve found an awesome ‘turtle shield’ that can soak an inordinate amount of damage at the cost of reducing my health – a trade I’m happy to make. If I crouch, I can also project it as a barrier in front of me, like Overwatch’s Reinhardt. I also have a very cool carbine that functions as either an assault rifle or a shotgun depending on the firing mode I choose. By contrast the loot is criminally dull in both Destiny and Anthem until the endgame – guns and armour are just icons that signpost your acquisition of gear score. Borderlands’ gear is full of personality throughout the game, and tactile, too, with in-game models that clatter around the environment. 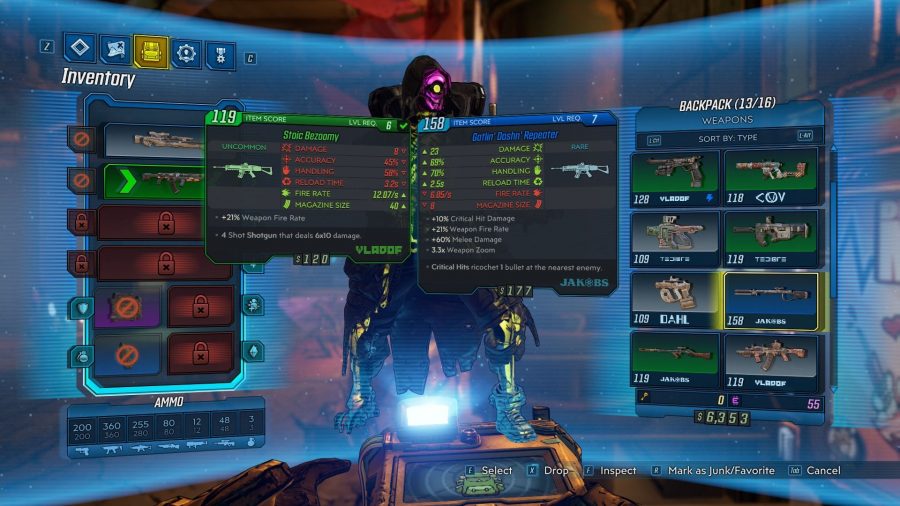 If anything, there’s too much of it. Having been conditioned by playing ‘90s shooters and strategy games on harder difficulties, I am compulsive in my search for both loot and optimisation. I will pick up loot like a kleptomaniac magpie, regularly filling Borderlands 3’s meagre inventory allowance, and then, so as not to waste a penny, I will backtrack to the last vending machine to sell it all. It means I can always afford to buy cool discoveries like my turtle shield, but it kills the game’s pacing dead. The deluge of loot also means that said cool discoveries are quickly obsolete – but even after only a few hours of play it’s clear that I’ll soon find another. It’s been quite an exercise in letting go.

However tiresomely ‘extra’ it is, Borderlands is still distinctive in its genre

Borderlands’ humour has been much-maligned online, and yes, I roll my eyes when opening a portaloo door causes a faecal geyser to erupt from the toilet inside. (My reaction is the same when it happens in the game, too.) But among the grating tryhard puerility and Claptrap being a whiny little prick, there’s the odd sparkle. The mechanic Ellie explains that a “Pandora flat” is a euphemism for your car exploding. When a bandit declares “this is our planet!”, FL4K’s response is: “I like your enthusiasm! Let’s see if my knife fits in your skull.”

I grate my teeth as an NPC tells me repeatedly how to advance a quest – I am quite deliberately not doing so, while scavenging – and then crack a smile when they rattle the fourth wall with their next nag: “you can either help me, or I’ll yell at you every 15 seconds.” Granted, it is more ‘cracking a smile’ than actually laughing, but that’s more than can be said for Anthem or Destiny, especially since Cayde-6 has departed. 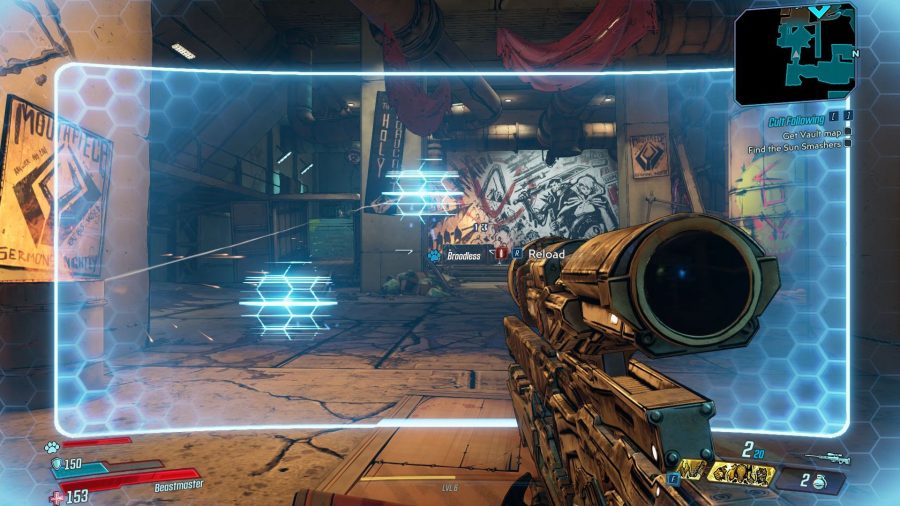 None of this is new. It’s refined in places, sure, but the humour is as it ever was, as are the twangy vibrato guitars, as is Pandora, as is the deluge of loot and the satisfying click and whir of the chests that present it to you on an unfolding platter. I have been here. I have done this. Some of it raises a comforting, nostalgic smile; some draws a groan.

I’m raiding the baddies’ propaganda centre. It’s a couple of hours in and I already think I’ve seen everything I need to see – but then I come up against the boss of the area. He can attack by blowing a wall of speakers, Marty McFly-style, or by shooting musical notes at you. His shield is a pulsating equaliser. His battlecries are delivered like a DJ priming the crowd for a beat drop: “My. Will. Is… LAW!” The soundtrack to the fight is one of fizzing magenta electro-trance. It’s brilliant. It’s distinctively Borderlands. It’s enough to keep me playing, for now.

One of my friends from that co-op session freely admits Borderlands 3 is more of the same, but says he isn’t looking for anything more than that. Early sales and user numbers suggest that plenty of others aren’t either. And it’s worth remembering that, however tiresomely ‘extra’ it often is, it’s still distinctive among the genre it helped create. When all of that is true, why would Gearbox change the formula?