Ever since its original ’90s incarnation, there’s been a music to combat in Doom. Somehow the ticks of the engine felt synced to the pulsing MIDI soundtrack, and the booming crash of your shotgun resounds like a drummer hitting everything at once.

The series’ modern incarnation embraces this musicality further, with Doom 2016 and Eternal setting their combat to a pounding djent metal soundtrack, but now two-person indie Awe Interactive is preparing to formalise the relationship between shooter gameplay and music. BPM: Bullets Per Minute is a ‘rhythm shooter’ – an explicit blend of Doom-style FPS with rhythm games like Guitar Hero and Audiosurf, in which syncing your actions to the music will have real gameplay effects rather than simply feeling cool.

The game is also adding a roguelike twist: BPM scatters a range of weapons and abilities throughout its randomly generated levels, meaning no two playthroughs will be the same. Ahead of BPM’s release later this month, we spoke to Awe Interactive’s game director David Jones and level designer Josh Sullivan about the unique challenges their project presents, and why they chose Unreal Engine 4 to tackle them.

The game’s core selling point was also its biggest design challenge, as Jones explains. “The issue was this: traditional FPSes teach you to impulsively shoot as soon as you can. However, in a rhythm game you wait for the beat.” How, then, should they get you to do that? 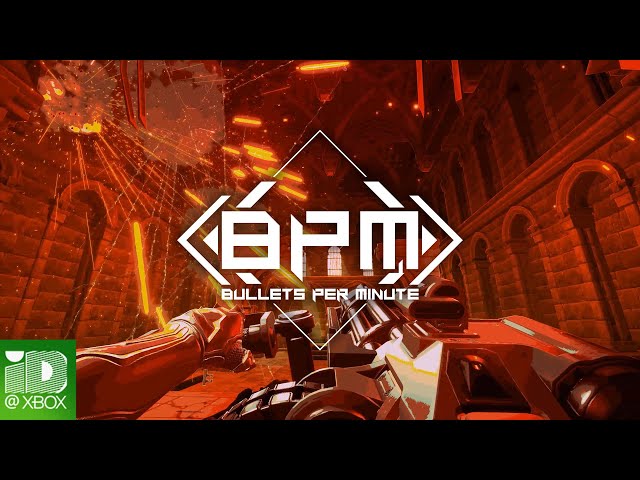 “From the start we wanted it to feel good for the player to shoot/dodge/dash/jump to the beat of the music in the same way that it feels good in Guitar Hero to strum the guitar on the beat,” Sullivan says. “That feeling of ‘I am contributing to the rhythm of the music’ feels so good when done right. We asked ourselves questions like: ‘What should happen if the player doesn’t shoot on time? Should we punish them, or does it even matter?’ Early on, we decided there should be a penalty for ignoring the beat. This is a rhythm game after all”.

Crypt of the NecroDancer already proved you can mash up rhythm, action, and roguelite. Our challenge was making this work in an FPS

“We spent a while in the wilderness trying to hone the feel of the mechanic,” Jones says. “But I believed it would work because Crypt of the NecroDancer had already proved that you can mash up rhythm, action, and roguelite. Our challenge was making this work in a first-person shooter. When we started, we had all sorts of ideas that were too complicated to work – we abandoned strange time signatures, guns that fired in triplets, ‘dotted’ time, and cut everything that didn’t feel intuitive.”

Balancing positive and negative feedback to achieve this feeling of synchronicity with the beat was another challenge. In some early builds, all you had to do was hold the trigger, and guns would fire on time to each beat until you emptied the clip. Perhaps unsurprisingly, the devs found that many testers would simply “switch off” while playing – so they decided to ramp up the difficulty a little. 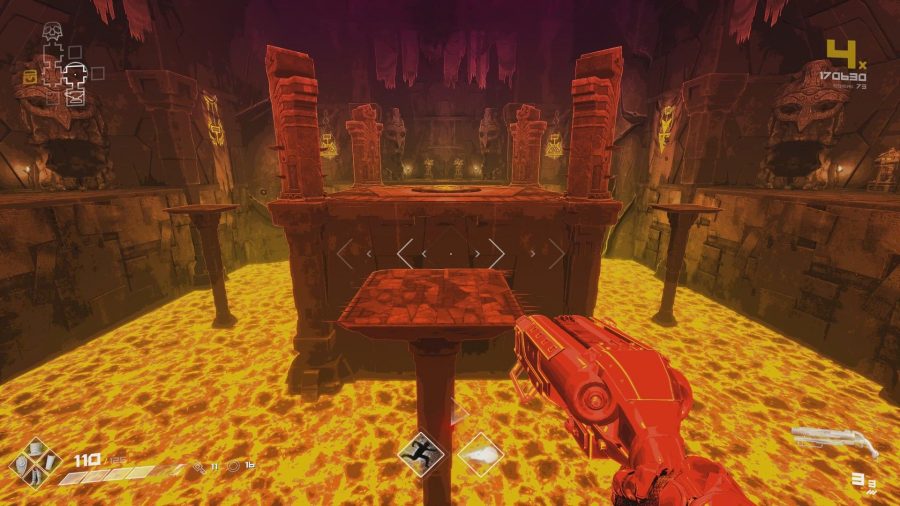 “I think the system we currently have in BPM is fair, but does require the player to pay attention to what is going on,” Sullivan explains. “Emptying a whole clip into a horde of monsters, then reloading the weapon, all in time to the beat of the music not only feels good to do, but sounds super satisfying too. It was all in-time and you did that”.

On the more positive side, the devs looked for every opportunity to strengthen your ability to feel the beat. Almost every action in the game is in time to the beat, from enemy attacks, movements, and even deaths down to the player’s own footsteps.

“We ended up with a simple system where you can perform an action with every half-beat – jump, reload, fire, dash, or use an ability – and we have ‘cooldowns’ on each of these actions,” Jones says. For him, the gameplay really clicked when the devs “introduced the mechanic of combo-ing dashes and jumps, inspired by Cuphead. We discovered this before Doom Eternal pioneered this kind of ‘acrobatic gameplay’, but were happy to see our discoveries confirmed by that game. 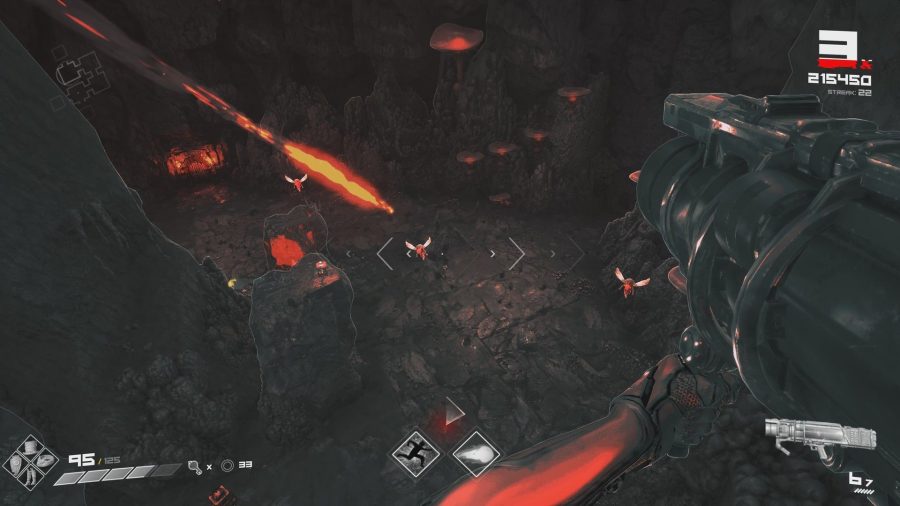 “We went really detail-orientated and have a subtle pulse programmed into every aspect of the game. For instance: one half-note after you start your jump, you are at its apex, so if you dodge at the top of your jump it’s perfectly on the beat. This rhythm effect really amplified for us when we started making the enemies do their attacks exactly on the beat. The right time to dodge an enemy is exactly on the beat. So it all feeds back into the feeling of the game’s pulse. Reinforcing this pulse throughout the game is a balancing act.”

We decided the game played best at 88bpm, so our composers had to find melodies that worked at that tempo

Another essential part of this balancing act is, of course, the music itself. The devs had to ensure it not only sounded good and got the player in the mood to destroy the hellish hordes, but also gelled well with the gameplay. The most significant restriction in this regard was its tempo. “The music being tied to the beat of the game means that each piece has to have a specific bpm [beats-per-minute],” Jones explains. “Halfway through development, we decided the game played best at 88bpm, so composers Sam Houghton and Joe Collinson had to find melodies that worked at that tempo. We also decided the game was best at a simple time signature of 4/4. These restrictions forced Sam and Joe to be creative, but they bring the game together.”

The devs originally planned to use music from a medley of artists, but “changed [their] whole direction” after hearing Houghton’s demo, because “what he came back with was so good.” Houghton had worked on Jones’s previous game, The Turing Test, and Collinson is a working musician who plays in several bands and transcribes music professionally. The pair met at Leeds College of Music and have performed original compositions on the BBC and for music festivals, Sullivan enthuses. 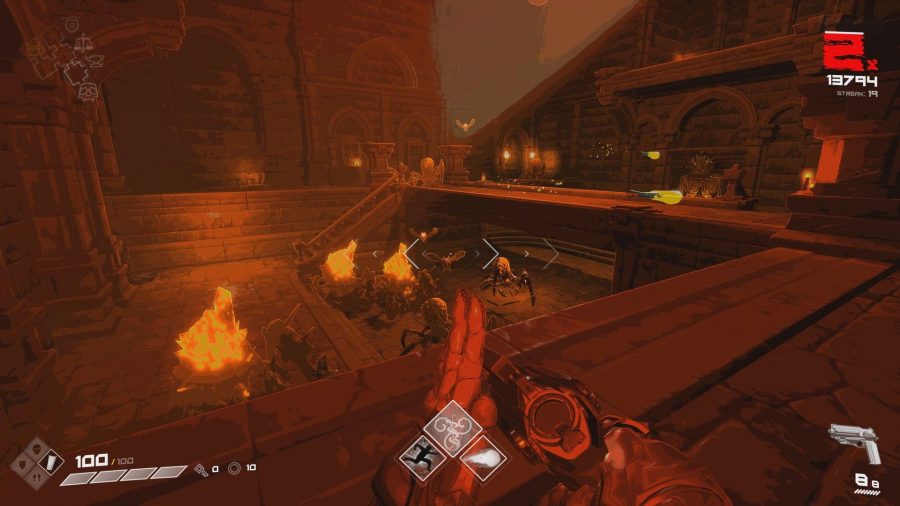 The musical nature of BPM posed problems well beyond the more obvious ones of how to get the player to act in time, such as ensuring the game actually recognises it when they do. Jones explains: “the first issue we tackled was synchronising audio, video, and input. When making a rhythm game it’s important that the game is responsive to the player’s rhythm. It’s also important the player feels the game is being fair. If you hit a note in time, and the game says you missed, you’ll rightfully be annoyed. So we invested a lot in investigating latency and that stuff at the start.”

With such fiddly technical and design challenges to overcome and only two full-time staff, Sullivan and Jones are full of praise for Unreal Engine 4. “It’s a powerhouse of an engine,” Jones says. “It solves a lot of problems for shooters straight out of the gate. We knew going in that we had very little time to make this game before we ran out of cash, so we picked Unreal as it was familiar and super powerful.”

Related: Check out the best indie games on PC in 2020

Jones explains that the technical concerns when making a game like this would typically include making the movement and animations smooth, making the physics work properly, writing optimised code quickly, setting up the Steam features, and generating AI navigation. “Pretty much all of these problems are largely solved if you know how to use UE4 properly,” he says, adding praise for its materials editor, which solved specific problems in programming shader code. 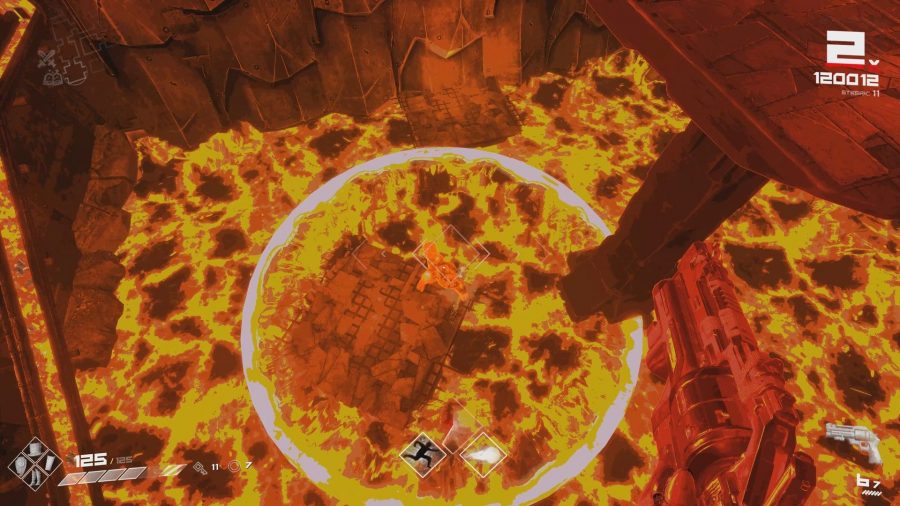 “Unreal’s core systems are super useful if you want to be hyper productive as an indie, especially for action games,” Jones enthuses. “There’s a great physics system, great particle system, powerful animation logic tools. The way it all works together is great too, allowing a single person to familiarise themselves with the whole engine.

“Unreal is unlocking possibilities for small teams like us to do ambitious games like BPM. We’ve seen PUBG change the whole shooter market with 35 people and 14 months. We’re going to see this happening more and more and in more dramatic ways as Unreal unlocks new opportunities for small teams and to create triple-A games. We see opportunities in the near future for ourselves to create games that three years ago would’ve been inaccessible for us.”

In this sponsored series, we’re looking at how game developers are taking advantage of Unreal Engine 4 to create a new generation of PC games. With thanks to Epic Games and Awe Interactive.