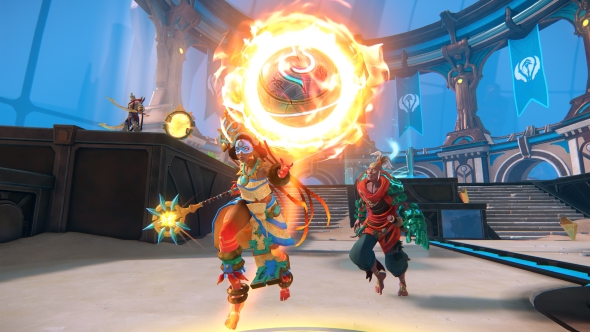 Back in October, Amazon Game Studios announced that development was temporarily going on hiatus. Today they’ve announced that has changed – but sadly, it’s the “temporary” part that’s changed. The developers have confirmed the game “is no longer in active development.”

“Since our last announcement, we have worked to implement community feedback and iterate on Breakaway’s core gameplay,” the developers say on Reddit. “While we have developed many ideas and made a lot of progress, we are also setting a very high bar for ourselves. In spite of our efforts, we didn’t achieve the breakthrough that made the game what we all hoped it could be. After a lot of soul searching, the team decided to focus on new ideas.”

This news isn’t altogether surprising given the unconfirmed reports around the previous announcement, which suggested that the game had already essentially canned. There was no word of layoffs at the time, though we don’t know if that will continue to be the case, especially considering the layoffs at Amazon-owned Twitch last week.

Original story, October 26, 2017: Things have felt pretty quiet with Amazon Game Studios in recent months, given what a wild revelation it was that the retailing giant was getting into game development, but there’s finally a big announcement concerning their flagship title Breakaway – it’s essentially cancelled. Maybe not quite the news we were hoping for.

“Over the course of the Alpha we received a lot of feedback from you that we’re taking to heart,” Amazon’s official post reads. “In order to get it right, we’re letting our team take the time to iterate and evolve Breakaway’s core gameplay to deliver what you’ve asked for. We aren’t sure how long this will take, but we think it’s the right thing to do for the game, and you, the community.”

That might sound like a small hiatus rather than a complete retooling of the game, but based on a report Kotaku published just prior to the announcement, it sounds like Breakaway will be rebuilt from the ground up – assuming it returns at all. Their sources suggest an “indefinite hiatus” for Breakaway, a likelihood only hinted at from the official announcement.

Breakaway was set to be a multiplayer, team-based action game combining characteristics of Overwatch and football, alongside heavy integration with Amazon-owned Twitch streaming. A new trailer released in August, and it seems that the final public alpha closed at the end of September.

Amazon’s Lumberyard game engine appears to still be in development, though none of its high profile titles – including the notoriously oft-delayed Star Citizen – have yet come to fruition. Though it seems no layoffs are planned at Amazon Game Studios, much of the studio’s apparent promise has worn off since it was formed with some of the biggest names in game development. Former Ubisoft designer Clint Hocking left the studio shortly after it was announced, and Portal designer Kim Swift has similarly moved onto other endeavors.