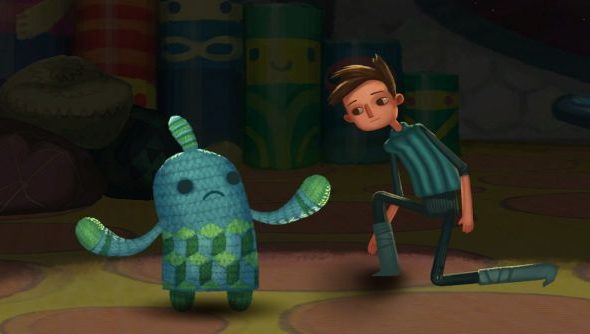 Double Fine have announced to backers that they’ll have to endure a slightly longer wait for the second part of their crowd-sourced Adventure game: Broken Age Act 2. The game is due to be in alpha testing by the end of this year, with a release date coming early in the next year.

“The game is looking really good and the team is working super fast” said Double Fine. “but we just gotta give the game the time it needs to really deliver on everything we’re hoping it will be.”

The news broke in a backer update on the Double Fine forums:

“The goal now is to get all the finale work done so we can hit Alpha on all of Act 2 by the end of the year.” explain the statement. “That means, as you may have guessed based on recent updates and documentary episodes, the Act 2 ship that will deliver the complete adventure is now looking like it will be early next year.

“The game is looking really good and the team is working super fast, but we just gotta give the game the time it needs to really deliver on everything we’re hoping it will be.”

The original project overshot its initial Kickstarter target of $400,000 by a further $2.9 million dollars. However, this wasn’t enough to complete the game – resulting in Double Fine splitting the game into two halves. Nevertheless, our Matt thought the first part was rather spiffingly good in our Broken Age Act 1 review.

Last week, Double Fine laid off twelve staff after a project deal fell through; lets hope it’s all good news from here on out.