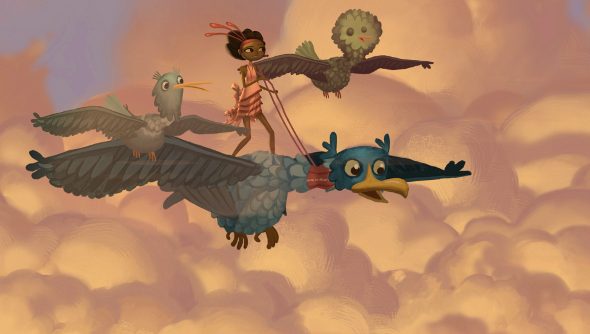 If you still like your PC games to be tangible things rather than bits of code floating in the aether and you also enjoy eye-wateringly pretty adventure games, then Double Fine has you covered. Schafer and Co, using eldrich rituals and blood sacrifice and a deal with publisher Nordic, are squeezing Broken Age onto a disc and then putting said disc in a box that you can hold in your hands.

The retail version of Broken Age will magically appear in shops this spring to coincide with the launch of – finally – Broken Age Act 2. The game was split into two after the studio ran into money trouble, even though the Kickstarter exceeded its $400,000 goal by $3 million.

“I am very excited about the retail version of Broken Age,” said head honcho Tim Schafer. “And also relieved, as having a widely distributed, physical copy of the game will make it more safe from solar flares and EMP bombs and stuff like that. As long as people store their disks in fire proof safes. People do that, right?”

That Broken Age Act 1 was excellent – if a little soft on the puzzle side – softened the blow of the long wait, and Schafer has promised some trickier conundrums for the second part.