Searching for the best PPSh loadout in Warzone Pacific? The PPSh-41 SMG has been a staple of the Black Ops games, so it was only a matter of time before it showed up in Cold War. This weapon also features in Call of Duty Vanguard, introducing a second PPSh-41 in Warzone.

The PPSh-41 wasn’t very good when it first launched compared to the rest of Warzone’s best SMGs, but the devs made sure it became a meta weapon. So, what makes this SMG so special? The PPSh is an excellent close to medium range option thanks to its high bullet velocity and low recoil stats. When you combine all of these important stats together, this makes the PPSh the perfect secondary gun for most loadouts.

The best Call of Duty Warzone Pacific PPSh loadout is:

To increase the PPSh’s time to kill speed, we’ve gone for the Recoil Booster muzzle which sacrifices accuracy for a quicker fire rate. As for the barrel, the Kovalevskaya 230mm B03P makes some weight adjustments to improve the weapon’s hip fire performance. This attachment enhances the PPSh’s hip fire accuracy, hip fire recoil recovery, recoil recovery, and fire rate. It’s not without some downsides, however, as the recoil control and aim down sight speed take a slight hit.

This SMG excels in close range encounters which makes the Slate Reflector optic an easy choice. The recoil is heavier than we’d expect for a close range weapon – choose the Empress Custom stock to improve the PPSh’s recoil control, flinch resistance, accuracy, and recoil recovery. Unfortunately, this stock does slow down your mobility, but it doesn’t hurt enough to ruin your movement speed.

Another recoil fix, the M1941 Hand Stop underbarrel decreases the gun’s hip fire accuracy in exchange for recoil control and accuracy. Large magazines are paramount in Warzone, so the 7.62MM Gorenko 71 Round Mags are the best option for the PPSh. These magazines weigh the gun down, impacting the aim down sight speed, reload quickness, and movement speed. Choose the Hollow Point ammo type to increase the damage you deal to limbs, though this does decrease the damage range.

The Stippled Grip is essential for improving the weapon’s recoil recovery and initial firing recoil without introducing any negative effects. For the perks, you should go for Steady which improves your movement speed while aiming down sights, and Quick to increase your sprint speed. 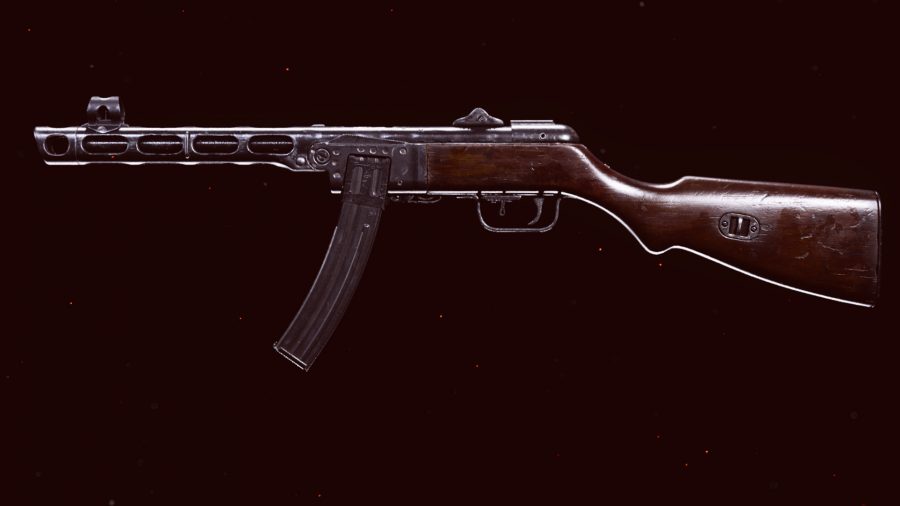 The best Call of Duty Warzone PPSh loadout is:

Not only does the GRU Suppressor muzzle come with the all important sound suppression perk, the PPSh also gains an upgrade to its effective damage range and bullet velocity. The suppressor doesn’t stop there as it even enhances the weapon’s vertical recoil control.

As for the barrel, the 15.7” Task Force is definitely the right option if you can handle some recoil. The 15.7” Task Force hurts the weapon’s vertical and horizontal recoil control, but it greatly improves the effective damage range and bullet velocity. You can switch this to the 14.3” Extended barrel which doesn’t impact the recoil and slightly improves the gun’s bullet velocity, in exchange for no improvement the effective damage range.

The Cold War SMGs have generous mag sizes compared to their Modern Warfare counterparts, but we aren’t complaining. Equip the Spetsnaz 71 Rnd Drum to ensure your weapon is constantly stocked with bullets. This does negatively impact the SMG’s aim down sight time, though this seems like a worthy trade off as the larger magazine can be vital in fights.

To negate the downside of the Spetsnaz 71 Rnd Drum, the Serpent Wrap rear grip is perfect as it greatly improves the aim down sight time. If you’re okay with fewer bullets, the 55 Rnd Drum gives you slightly less of a downgrade for reload speed and no ADS time penalty. Finally, the Raider Stock increases the PPSh’s sprint to fire time, ADS firing move speed, and aim walking move speed, all at the cost of hip fire accuracy, which we’ll happily deal with to improve the weapon’s mobility.

Once you’ve managed to build this Warzone PPSh loadout, it’s time to pick a secondary weapon. We highly recommend using the best Pelington 703 loadout as this sniper rifle can easily wipe out enemies from a distance. The PPSh is so versatile, you’ll find that it can work well with the best Warzone SMGs and the best Warzone sniper rifles.