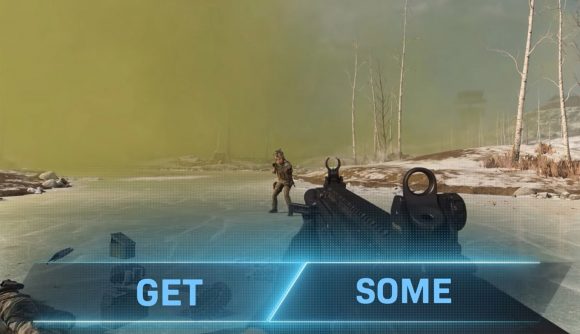 One question some people had, however, was what the game’s winning slogan would be. Is it like Fortnite‘s Victory Royale? Is it something similar to PUBG‘s winner winner, chicken dinner? Well, not really. Win a game of Warzone and the game simply tells you to “get some”.

That’s right. “Get some.” For context, Urban Dictionary defines the phrase as “score some booty”. Alternatively, “to get some sex, or get some action”, or according to a user named USMC_Grunt, “getting a confirmed kill in a firefight [or] war”. Alrighty then.

Confirmation of the victory message comes from a PlayStation Access video, which shows a full match of Warzone gameplay. Despite publisher Activision’s apparent intention for the mode’s announcement to be a surprise, Warzone had leaked multiple times ahead of that official reveal, meaning we knew almost everything about it already.

The free-to-play mode contains 150 players, who if killed in the early stages of a match have a chance to come back to life by winning a 1v1 shootout in the Gulag. The map, meanwhile, is made up of new areas and a selection of familiar Call of Duty locations, including Scrapyard, Overgrown, Broadcast, and Terminal. Vehicles and different weapon rarities make an appearance, too.