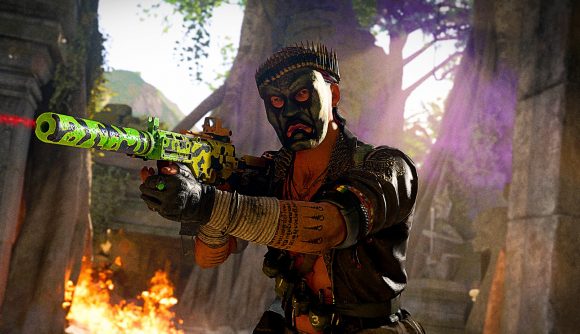 There’s a new Call of Duty: Warzone pistol in town, gang, and it looks like it’s quite good indeed. The Sykov pistol joined the game as part of an update this week, and players have been swift to try it out to devastating effect.

Clips of players using the new Warzone pistol have begun to flood Reddit, and, boy, it’s staggering how quickly people are getting owned. One clip (below) in particular sees a player storm a house with his team and win three consecutive one-on-one duels while dual-wielding the pistol. That must have been nice for his comrades.

If this weapon sounds familiar at all, it’s because we briefly saw it before. One player managed to access a blueprint of the then-unreleased pistol by using weapon drops in Warzone’s Plunder mode. It was previously only useable in Modern Warfare’s Survival mode, though it’s now been fully unleashed. By the looks of things, it’s not so much the weapon itself that’s powerful, but what you can do with it through perks. You can modify the pistol to have 80 rounds and make it fully automatic. The most effective perk, however, is Akimbo, which allows you to dual wield the pistol.

Players have, uh, not taken kindly to their new overlord.

Getting the weapon itself is a doddle. All you have to do is get four kills while using pistols in five different matches, and then you should be set. When the pistol first launched, a bug was causing the Sykov gun unlock achievement to be visible but not track progression, but Raven says that should all be fixed now.

Players aren’t exactly thrilled with how good it is, so it’s likely to catch a nerf pretty soon. In the meantime, though, enjoy it while it lasts.

We've fixed an issue in #Warzone that was causing the Sykov pistol unlock achievement to be visible but not track progression. Players should now be able to unlock the weapon as intended.https://t.co/KeNZl9Z9R6

Elsewhere in Warzone, players are beginning to respawn as zombies. Hm, no wonder they’re not happy about being blitzed by the Sykov. As per the lore explainer, radiation levels in Verdansk are now at 100%, leading to nuclear zones popping around the Vodianoy shipwreck and the Prison.

This is all leading to the much-teased nuclear event next week that’ll likely see Verdansk wiped off the map. Going off a tweet from the Call of Duty Twitter account, it looks like that’s happening on April 21 at 8pm BST.

If you want to know how to unlock the Sykov pistol in Warzone and Modern Warfare, or what the best Sykov loadout in Warzone is, we’ve got you covered.