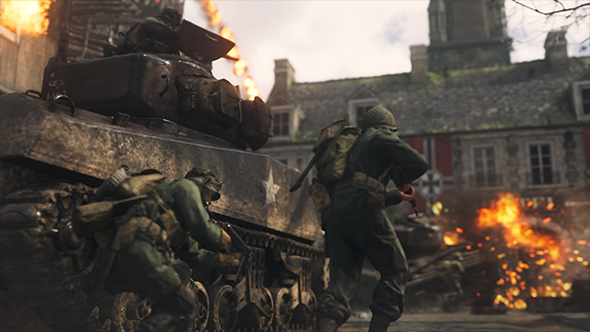 Multiplayer in Call of Duty: WWII will be getting a major shakeup this week, thanks to sweeping changes to the game’s divisions.

Here’s the list of our very favorite first-person shooters on the PC.

The changes standardize certain skills and attachments across divisions, and are aimed at making specific loadouts and basic trainings less essential.

“Division skills, like the SMG suppressor, shotgun incendiary shells, rifle bayonet, and pistol tactical knife will all become standard attachments that you select as part of your loadout,” said Greg Reisdorf, Sledgehammer’s principal multiplayer designer for WWII. The sniper sharpshooter ability and LMG bipod will automatically be available whenever you pick a sniper rifle or LMG.

Along with some additional division rebalancing, this means lesser-used divisions will become more viable, since they’ll be able to use popular skills and attachments that have up until now been division-specific.

Sledgehammer are also removing the Primed basic training option, which grants a third attachment slot for primary weapons. That option will now be available to all loadouts. Similarly, the Bang basic training is being cut, and all loadouts can now bring a piece of both tactical and lethal equipment, and anyone can select a launcher as a secondary weapon.

Another major change is that Sledgehammer is giving everyone unlimited sprint. The limited version, Reisdorf said, didn’t wind up being beneficial to gameplay, so they’ve axed it.

The full patch notes can be found over at the official Sledgehammer community site. The changes are scheduled to go live April 10th.