After 15 hours with Chivalry 2 I’ve managed to secure kills by throwing flaming chickens, anvils, lances, the heads of other players, boulders, sticks, ballista bolts, shields, broken bits of ladder, and pitchforks. I’ve kicked enemies off cliffs, 300-style; loaded myself into a catapult and soared behind enemy lines to slay archers; won a duel after losing an arm to the same enemy; and ducked into an outhouse to hide from a marauding horde. If you can dream it, then you can probably do it in Chivalry 2’s medieval battle sandboxes – which you can buy here, coincidentally.

But beneath all the Monty Python absurdity lurks a surprisingly complex first-person slasher. Melee players have three basic attack types – horizontal slashes, overhead strikes, and thrusts – to switch between, and you can hold down the left mouse button to turn any of them into a heavy attack, which is handy for messing with your enemy’s timing and dealing some extra damage.

You can combo by chaining any of those three attack types together, but you can also interrupt a combo by hitting the ‘R’ key to throw a quick jab. Kicking with ‘F’ is great for breaking an opponent’s block or pushing them back, sometimes into spike traps or down wells. ‘Q’ will unleash a special attack that’s nearly fatal and stuns a blocking enemy, and if you’re feeling confident you can throw your weapon with ‘G’.

Impressive, no? But there’s more! Once you’ve got the fundamentals down you can start dragging, which involves quickly turning into the direction of your strike so you make contact sooner. Then there are feints, like winding up a slash before switching to a stab, to keep enemies guessing. Dashing lets you quickly sidestep or back away from an incoming attack, but relies on you being able to read the direction of that attack to work – I can’t tell you how many times I’ve accidentally dashed into a slash and lost my head for it. Ducking has a similar risk and reward component, occasionally coming in handy during group fights where you can trick two enemies into taking each other out. 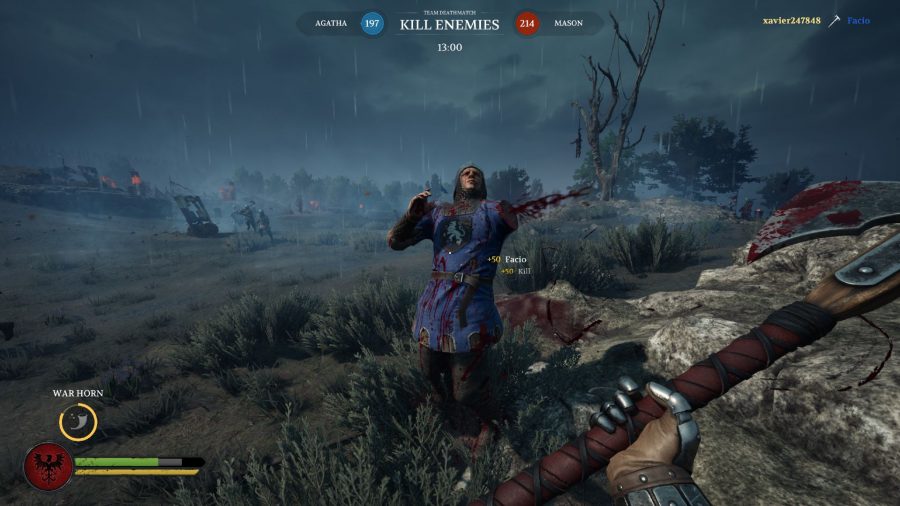 Finally, there’s blocking. Unlike in Mordhau, you can hold a block and negate all incoming damage with any weapon in Chivalry 2, although it will quickly drain your stamina. A block keeps you safe, and then you can riposte by aiming at the incoming strike and immediately following up with an attack. You can also perform a perfect parry by anticipating your enemy’s attack and mirroring it – that last one is the only way to get a guaranteed hit unless your opponent’s stamina is drained.

More like this? Here are the best medieval games on PC

You get the picture. When you factor in all of the above, there are a lot of different ways to win a fight in Chivalry 2. As sword games go, it’s not quite as precise or smooth as Mordhau. However, the fundamentals are approachable and easy to learn, and even a master can make a mistake, so you never feel like you’ve lost a fight before it’s even started. It helps, too, that in the chaos of a 64-player siege battle there’s plenty of space for flanking and ganking if you don’t fancy an honourable duel.

A simple class system separates basic player roles and adds some progression to guide you through your first 15 or so hours. There are four classes – knight, footman, vanguard, and archer – and within each you’ll find three subclasses and a range of weapons to unlock that fit the intended playing style. 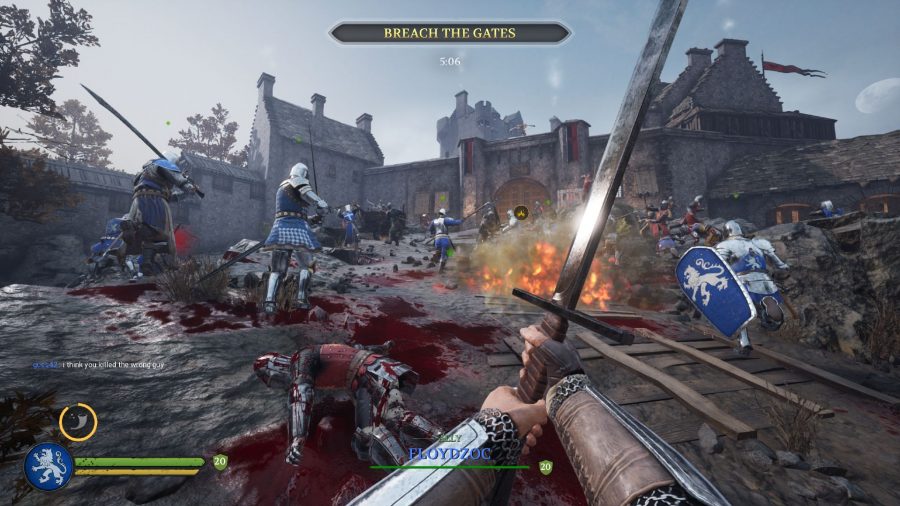 I quickly found myself steering toward the glass cannon Vanguard class, before settling into its Raider subclass, which lets you carry two heavy primary weapons and is a lot of fun if you get good at throwing. Starting a fight by throwing an axe straight into an enemy’s chest and then equipping another axe as they limp away is extremely metal. Each class also has an ability and a trait, which keeps lethal throwables like oil pots locked away behind a cooldown, thus keeping the battlefield safe from cheap spam attacks.

Speaking of which, archers are perhaps the only frustrating class to play against, and most of my deaths have come from ranged attacks. There is a hard limit on the number of archers each team can have, and as much as it sucks to be killed in the middle of a duel you were winning because of a stray arrow, it’s even more satisfying when you manage to isolate an archer and lop their arms off. And as our senior news writer, Ian Boudreau, pointed out to me, if you launch yourself out of a catapult then you can bypass the front line entirely and immediately start whaling on them.

Map design is another of Chivalry 2’s strengths. There are three team deathmatch maps and five team-objective maps, which are grandiose, multi-stage battles in which you’ll attack or defend a series of objectives. The latter are the main attraction, offering the kind of spectacle you’d expect from a Hollywood blockbuster as your team grinds out every inch of ground, pushing siege weapons to the city walls, battling to open the gates, pillaging the town inside, assaulting the keep, and finally slaying the king. 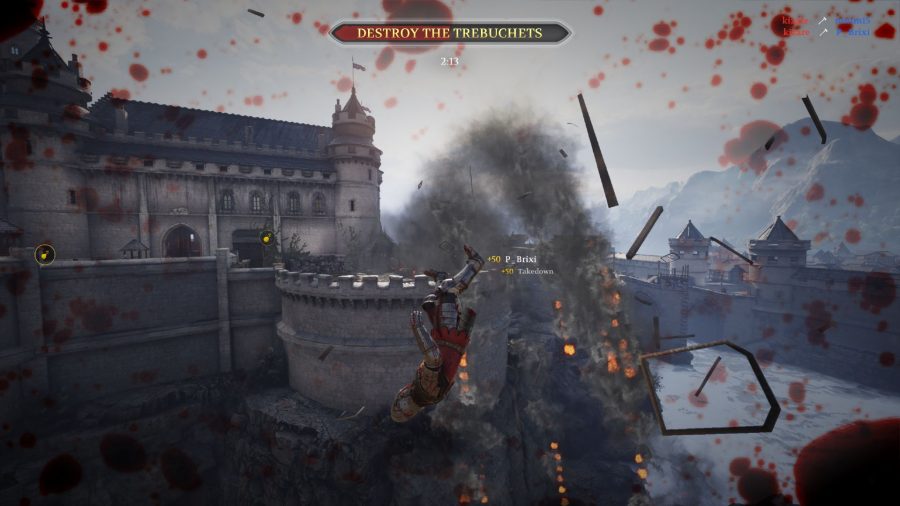 Each of the five maps has its own little narrative, and when you load into a match you get a rousing pre-battle speech that lays out your army’s goal before launching both teams at each other in a pitched battle. The variety of objectives across each stage ensures there’s a satisfying ebb and flow to every clash, and even in matches where it felt like we were getting rolled, there was always a stage when we almost turned the tide in our favour – and a few when we actually did.

My absolute favourite objective across these five maps comes at the end of Escape from Falmire. After battling to free soldiers from a prison camp, capturing a bridge, and storming a fort, you manage to liberate your army’s champion. At this point a random player on your team will spawn as said champion and your final goal is to safely escort them out of the fort.

Knowing that the result of the whole match hinges on your team’s ability to defend one person adds a sense of urgency that creates pure chaos on the battlefield. Teammates cascade over each other in an effort to keep their champion alive, while desperate enemies can be seen breaking world records as they hurl their weapons at them in hope of snatching victory from the jaws of defeat. 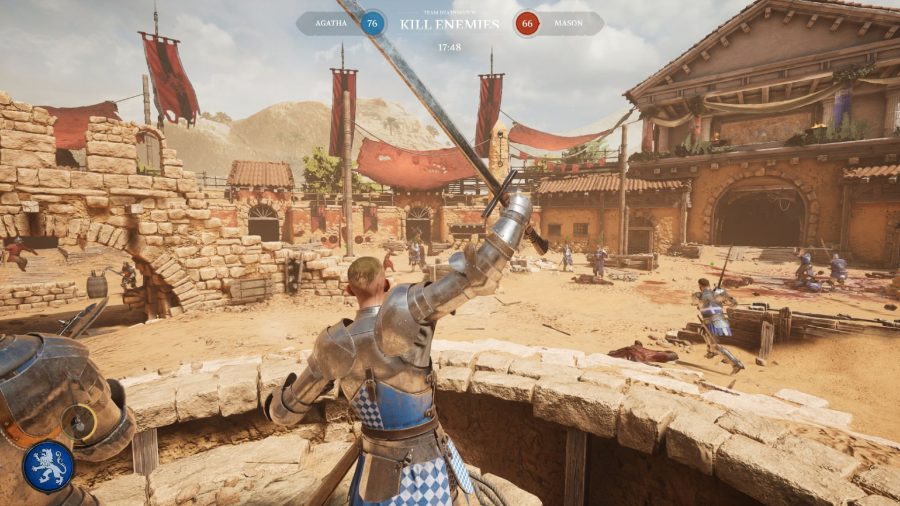 The smaller team deathmatch maps are much less interesting, which suits the simplified objective, although The Fighting Pit is an exception. This gladiator arena has a spike-lined well at its core, with a platform in the middle that’s barely large enough for two players to stand on. There are fire traps and trap doors that you can activate to punish players who lose sight of their surroundings, and the spawn points change so often that I’ve entered the arena while charging alongside an enemy. It’s utter chaos.

I am having so much fun with Chivalry 2. Just when it seems like all multiplayer games are striving for competitive integrity and esports potential, jumping into a make-believe castle siege armed with nothing but a trout really stands out. Chivalry 2 is a bloody scoop of sorbet, a playful palate cleanser that’s unrelenting silliness will elicit a grin from anyone who plays it.

A first-person slasher for Monty Python fans rather than reenactors, Chivalry 2's unswerving dedication to fun and goofiness makes it a rare treat in modern multiplayer gaming.