Hacking and slashing your way through hordes of enemies with an oversized sword in hand is one of videogaming’s greatest delights. Sword games can strive for realism, both in their combat and setting, or set out to be ludicrous power fantasies – there are no hard and fast rules here, which makes it all rather exciting.

So given that it’s an extremely broad genre, you might well be having a tough time finding the best of the bunch. That’s precisely why we’ve collated a handy list that spans all types of sword games, from 2D co-op titles and hack ‘n’ slash actioners to VR rhythm games and expansive sandbox RPGs.

Regardless of whatever type of sword games you enjoy, you’re sure to find something here that takes your fancy. We’ve also tried to get a nice mix of single-player and multiplayer games, just in case you have a strong preference for either. And so let’s get to it! Here are the best sword games on PC in no particular order.

Here are the best sword games on PC: 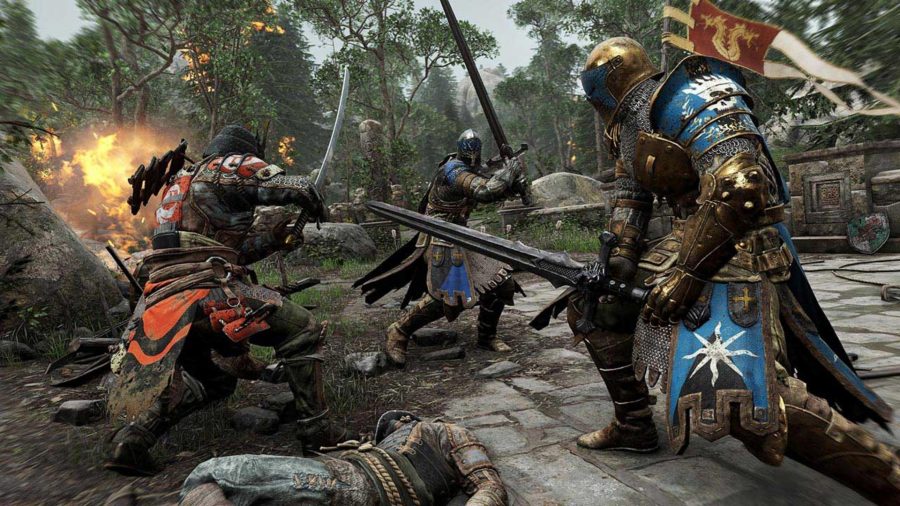 For Honor sidesteps any attempts at historical authenticity for a Deadliest Warrior approach that allows you to pit samurai, Vikings, knights, and Wu Lin warriors against one another to see what might happen.

The results are often incredibly fun, and while the premise might seem silly to Mordhau or Chivalry players, there’s a great deal of depth to its combat system and distinct heroes. Give over to its charms and you’ll likely have a blast. 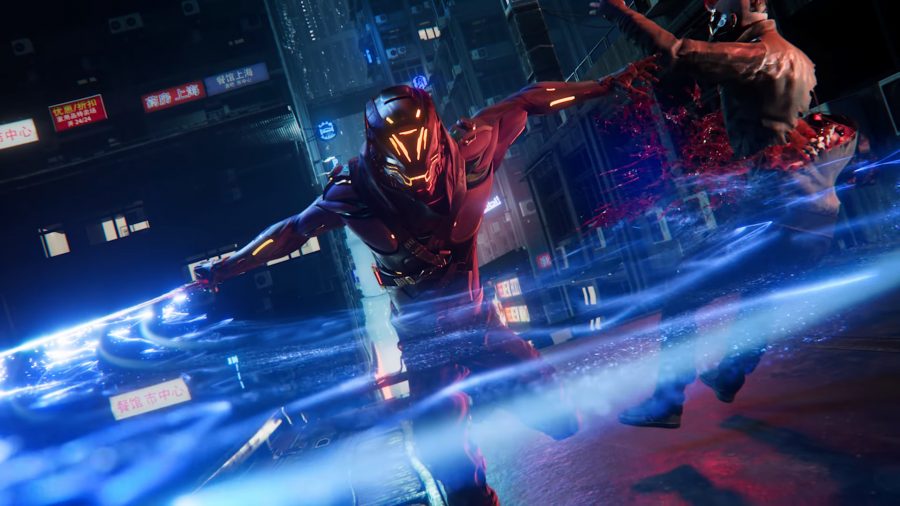 Ghostrunner’s vicious combat is a fast, furious delight, with your instakill strikes resulting in comically OTT eruptions of gore. It’s all in aid of creating that ultimate cyberpunk ninja experience, as you skilfully wall-run, slide, and dance between bullets with ease.

And while the up-close combat is kept deliberately straightforward, nailing some impossible parkour and landing a killing blow is still immensely satisfying. Our full Ghostrunner review calls it “Titanfall meets Hotline Miami”, if that gives you any indication of just how intense it can get. 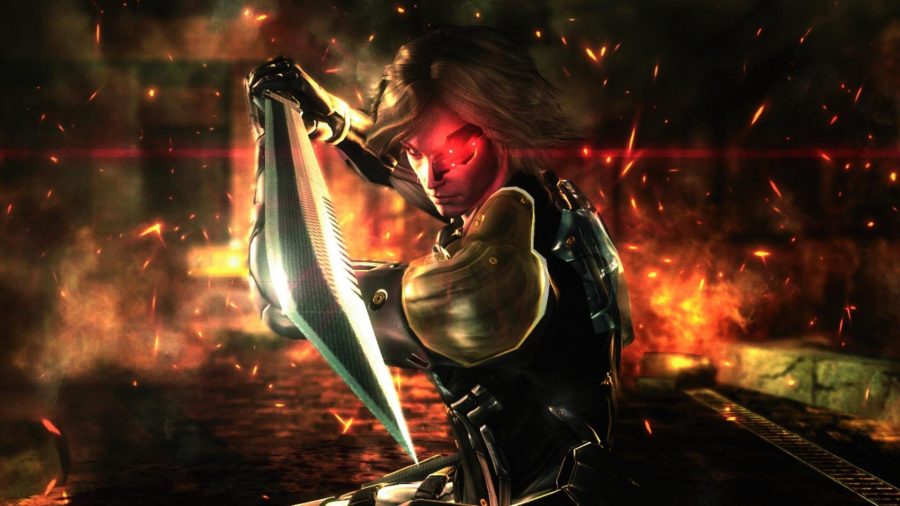 Metal Gear Rising: Revengeance is a radical departure from its stealthy predecessors, being a lightning-fast, Platinum-developed action game with some of the finest hack ‘n’ slash combat around. As pouty cyborg Raiden, you’ll battle your way through a ludicrous plot and plenty of killer boss fights while gradually mastering the art of the blade.

It’s pitched somewhere between Bayonetta and Devil May Cry, though Raiden’s ability to slow time to a crawl and dissect his foes is a memorable (and rather disgusting) addition. Plus, you can slice up nearby cars into little bits – it’s great fun. 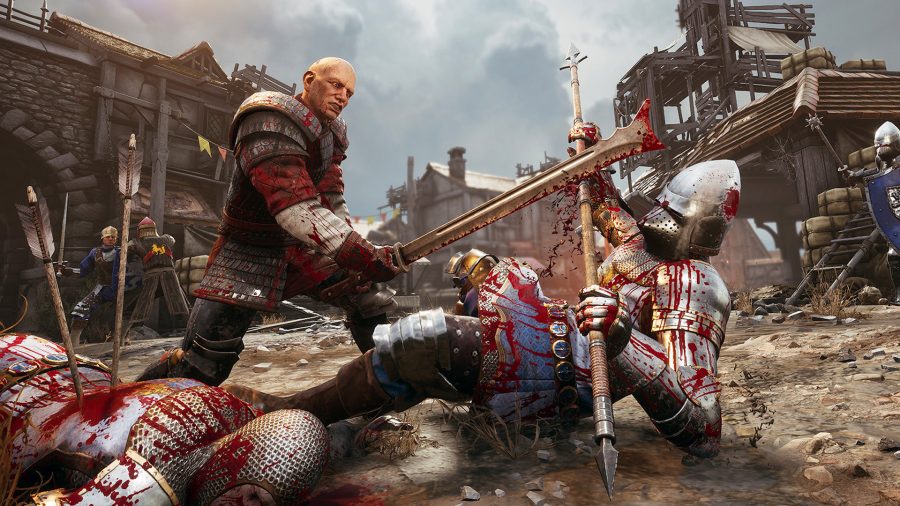 If you want heavy, exceedingly violent medieval swordplay, Chivalry 2 will no doubt be to your liking. It’s equally adept at large-scale multiplayer battles, and while the largest of fights can be a touch unruly, the game positively soars when the stars align and everything works as it should. Featuring fights with up to 64 players, mercenaries can fight alongside a team as they work together to raid a castle.

Chivalry 2’s up-close encounters do definitely take some getting used to, but with that comes a greater sense of progression as you attain mastery of your preferred combat style. Chivalry 2 is currently exclusive to the Epic Games Store, but it has a Steam page for its inevitable release in 2022. Check out our Chivalry 2 review to see how this game stacks up against Mordhau. 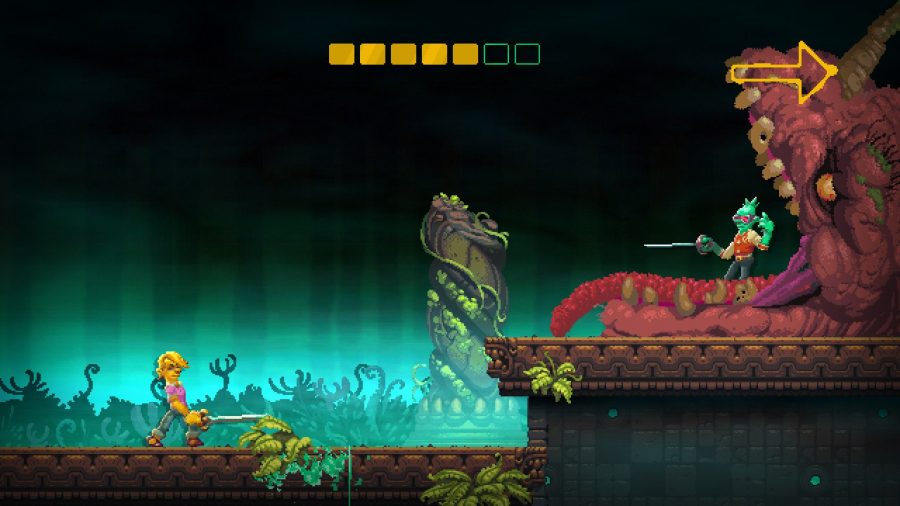 Nidhogg 2’s swordplay demands experimentation and quick thinking, not least because your player-controlled nemesis might start blasting you with arrows or opt to lob a dagger at your face. There’s no room for chivalry in its fleshy, repellent world.

However, spamming attacks and going for head-on assaults can be a recipe for disaster, so hanging back for a split second to read or throw off your opponent makes all the difference. You also have to consider that a simple prod with your sword is enough to kill them dead, making untelegraphed moves especially effective. Despite its gross-out style, there’s clearly a good deal of hidden depth to Nidhogg 2’s hectic action. 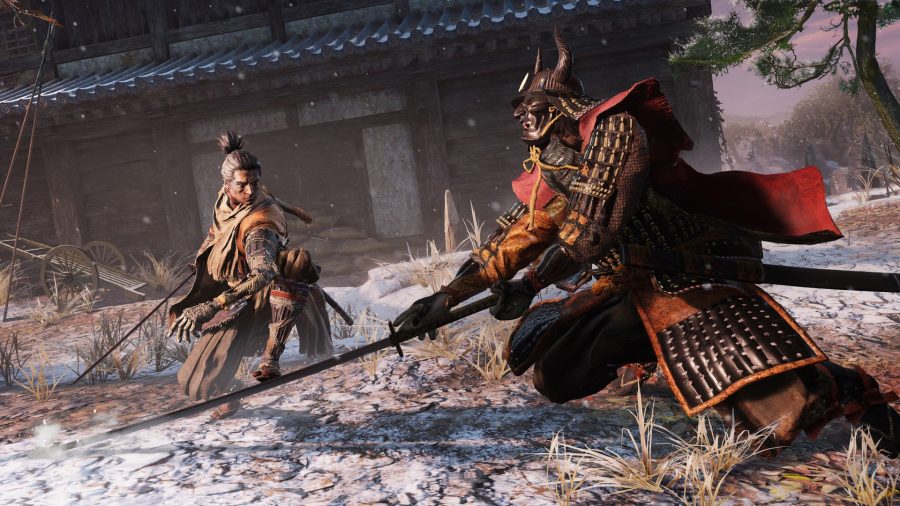 At times, you’ll fall into a rhythm-action trance as you expertly flow from one move to the next with the utmost flair. Hulking demons and master samurai are no match for a clear head and good timing.

And despite the level of difficulty on offer, it should work as a welcoming entry point to the wider world of FromSoftware with its kinder respawn mechanic. At the very least, you won’t get quite so lost in this one, so long as you eavesdrop on enemy conversations and keep an eye out for the myriad environmental hints. 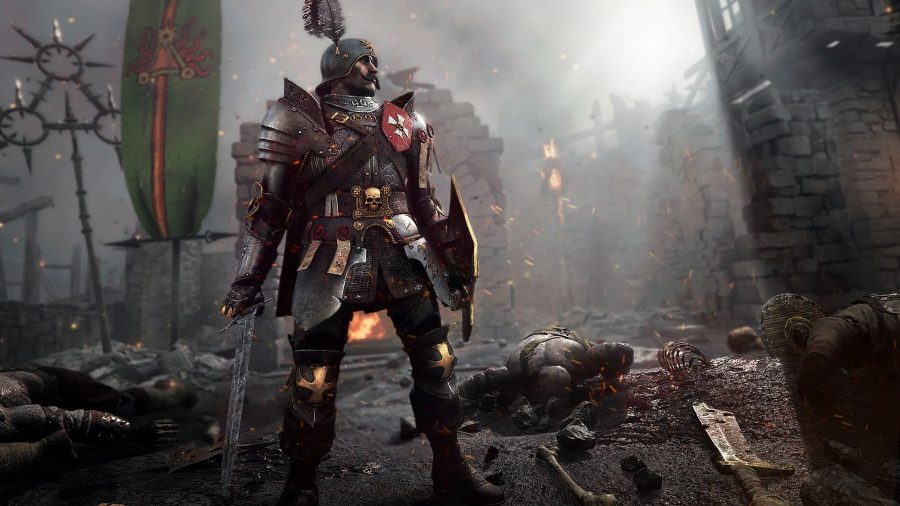 Taking cues from the likes of Left 4 Dead, Warhammer: Vermintide 2 sees you teaming up with some pals to battle your way through well-crafted levels filled with revolting ratmen. Few co-op games offer quite as much as this one – there’s a frankly silly amount to see, unlock, and decimate here.

And you’ll always be having a good time thanks to the game’s bloody swordplay and varied arsenal, which certainly isn’t limited to swords alone. It’s a solid rat game (click if you dare), and its post-launch support has been consistently good. 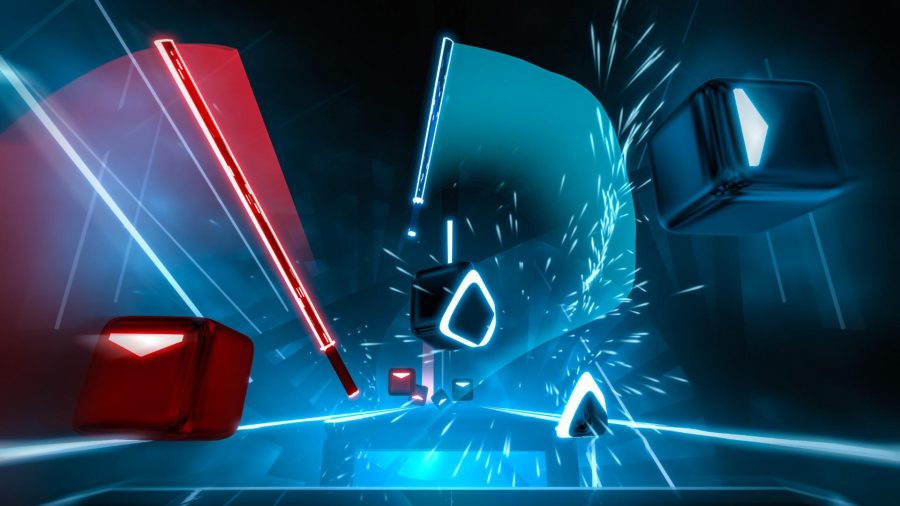 Beat Saber doesn’t see you facing down a rival swordsman, but its brand of rhythm-action slashing is no less intense. As a VR game, it’s utterly entrancing and remains exciting for far longer than you might expect, with custom levels helping to greatly extend its long-term appeal.

It’s easy to get carried away in the moment or caught up in a satisfying flow. Just don’t think about how silly you look while playing. And as simple as it may be, it’s still easily among the best rhythm games on PC. 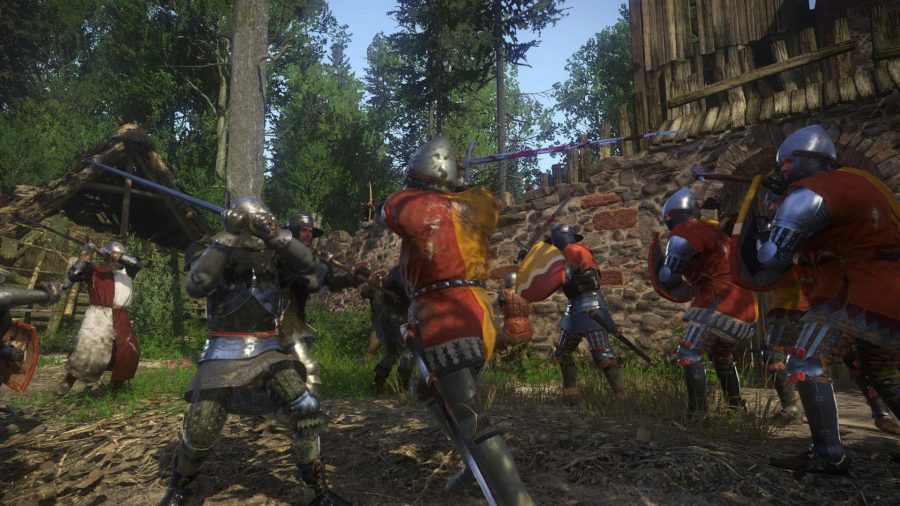 You can easily spend hours in Kingdom Come: Deliverance, Warhorse’s simulation-heavy RPG game, without ever once needing to unsheathe your blade. That said, this only increases the intensity and importance of your battles with medieval Bohemia’s deadliest.

Getting caught off guard by a ragtag team of bandits is therefore cause for celebration, as such encounters give you the chance to hone and show off your swordplay skills. Much like every system in Kingdom Come, its tactical combat takes a while to get used to – and it will feel deliberately awkward at first – but stick with it and you’ll soon be taking down armoured killers in style. 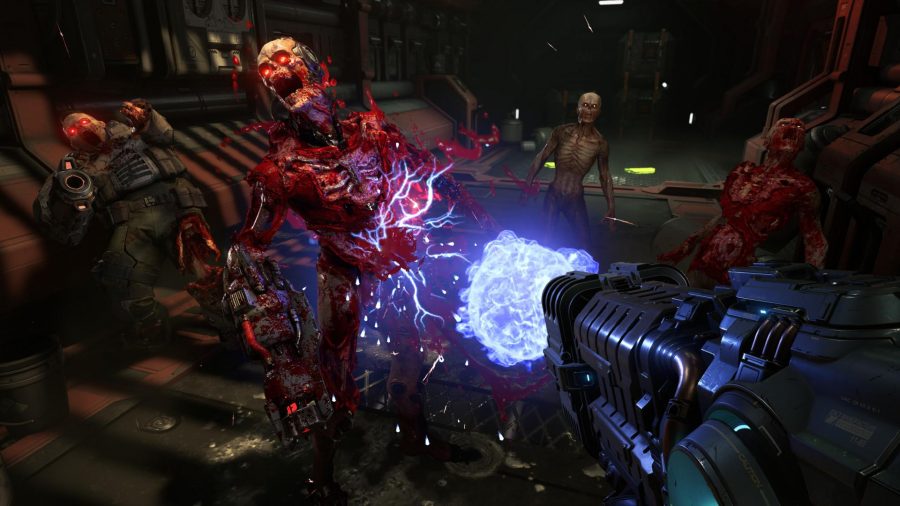 Now, we know what you’re thinking. Doom Eternal might not be the most obvious choice for a list of best sword games, considering that it’s an FPS and all. That said, its Crucible energy sword is an all-timer. From the moment you restore the blade to its former glory, it’s clear that the Crucible is no ordinary weapon.

It functions as an instakill super of sorts that can rip and tear the toughest of demons into gross chunks. Honestly, it’s the perfect way to thin down the enemy ranks whenever things get a little too hectic, and it just feels phenomenal to swing, like the ultimate lightsabre.

And that’s it for our list of the best sword games on PC! Hopefully we didn’t miss your favourite, but if we did, there’s every chance that it might be added in a future update. If you’re still on the hunt for the best PC games, might we suggest our lists of the best roguelike games or best indie games on PC?