Medieval games are less common than you might think. Rare is the videogame that doesn’t feature at least one sword, suit of armour, or roast chicken, but they’re usually mixed in with bearded hermits slinging magic fireballs, which we’re reliably informed your average medieval peasant had very little knowledge of.

To that end, we’ve assembled a list of the finest PC games that eschew all the prophecy and pyrotechnics for some good old fashioned steel-on-steel action. Strange women lying in ponds distributing swords is, after all, no basis for a system of government. Similarly, a level ten Necromancer against a blacksmith wearing a potato sack is no basis for a fair fight.

Nothing is quite as satisfying as putting your feet up in the local tavern after a hard day mucking out your liege's pigpen for pocket change. So, put down the healing potion and prepare to liberally apply leeches to any and all wounds you might have, before living a miserable life of poverty and probably dying of the plague. Here are the best medieval games and knight games on PC.

Here are the best medieval games on PC: 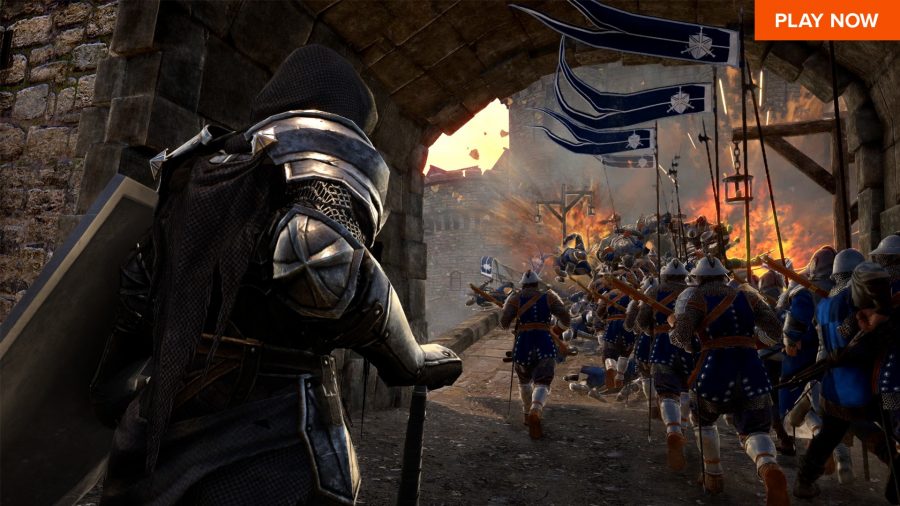 Conqueror’s Blade is a free-to-play MMO set in the gory Middle Ages, where you play as a warlord in command of an army, leading your chosen units into epic 15v15 PvP battles. You can survey the battlefield from both third-person and top-down perspectives, to ensure you’re squeezing every advantage from your positioning. You take part in Field Battles and Siege Battles, and can wield a huge amount of control over your combat style thanks to the sheer number of weapons and units you can customise. Sure, you can head into battle with a sword and shield – or your warlord can wield glaives, mauls, or even a huge Japanese nodachi.

To raise the stakes, you’re able to join a House, and become part of a larger combined force – Houses engage in larger-scale battles such as Territory Wars, and if you’re lucky, your bannermates will share rewards and resources to help you grow your army’s strength. 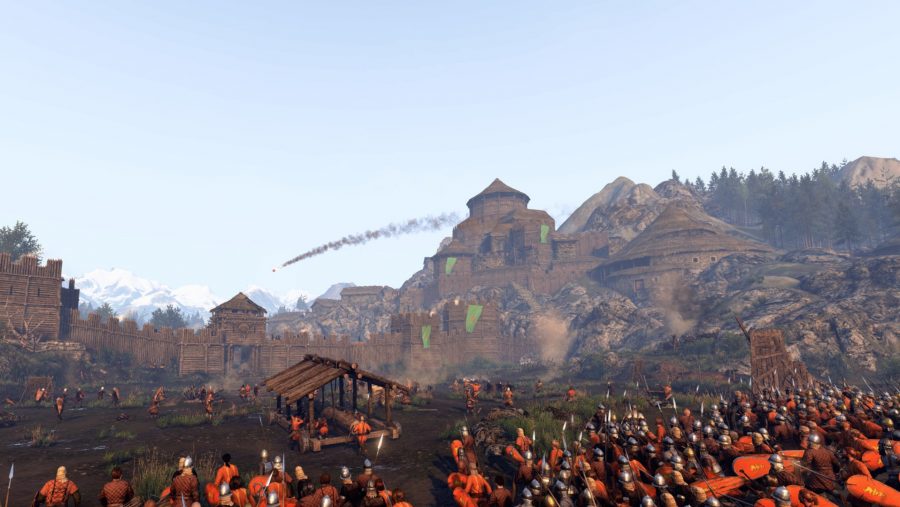 Mount and Blade 2: Bannerlord understands what combat in medieval games is all about, and that is the feeling of being part of an extremely dangerous moshpit, jostling for a few inches of space to swing your mace into someone’s forehead, who then dies instantly because that’s how maces and foreheads work. You’re never further away than an arrow in the eye from death, which means that Bannerlord’s huge battles absolutely thrum with vitality, tension, and danger.

If this medieval game was just about creating openings and trading blows, it would still be a damn good time, but Mount and Blade 2: Bannerlord’s squelchy skirmishes take place in a huge medieval sandbox. Warring factions and empires, trading, romance, bandit raids, sidequests, arena duels, and town management all exist side-by side. On top of this, the battles themselves feature an entire RTS layer, allowing you to order your troops into formations and give orders. It becomes a hybrid between your favourite strategy games, open-world games, simulation games, and RPG games, resulting in something totally and uniquely Bannerlord.

At the time of writing, Mount and Blade 2: Bannerlord is still in early access, so there’s a few rough spots to iron, cracks to smooth out, and breastplate stretchers to fetch. But, even at this stage, it’s still one of the finest medieval games out there. For fans of huge, exciting battles, or just moving from one city to the next selling large quantities of cheese. 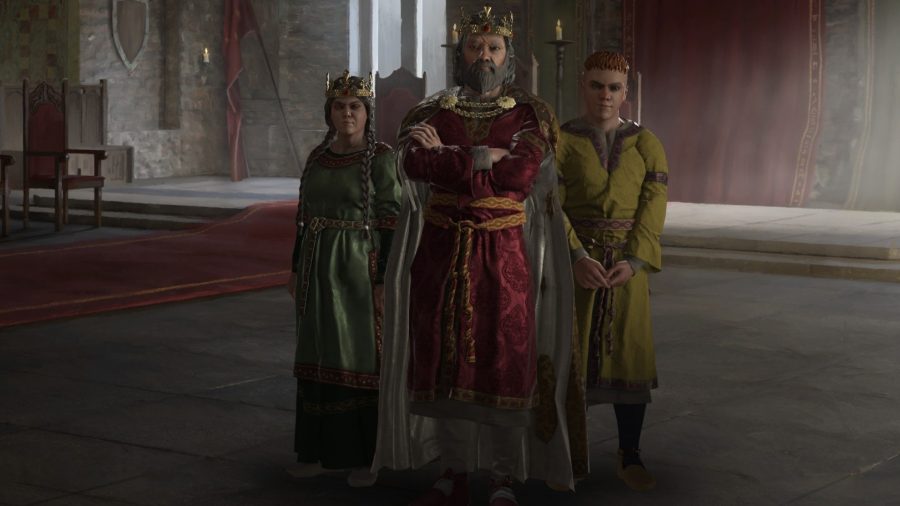 Paradox Interactive’s grand strategy games have a reputation for impenetrability, but we’d bet our favourite heirs that that’s set to change now Crusader Kings 3 is out. It’s not only the most instantly accessible of Paradox’s oeuvre; it achieves this without sacrificing an inch of depth, making it one of the best medieval games out there.

Crusader Kings 3 stands out from the medieval games crowd for one important reason: it’s about people, not empires. As much an RPG as it is a statistic-laden map painter (perhaps moreso), an average session of Crusader Kings 3 focuses on the triumphs, failings, victories, and heartbreaks of an individual ruler and the people close to them. It’s basically a magic box you click on to make cool stories come out of.

On a given day, you might task your spymaster to fabricate evidence your second cousin has been practising witchcraft, just to give you an excuse to imprison them and strip them of land and titles. Or, you might spend a lifetime devoted to your faith only to create your own nature-worshipping splinter branch and spend your twilight years ruling stark-naked but for a glorious imperial crown. It’s got something for everyone, or at least everyone who enjoys a healthy bit of conniving, backstabbing, and betrayal. 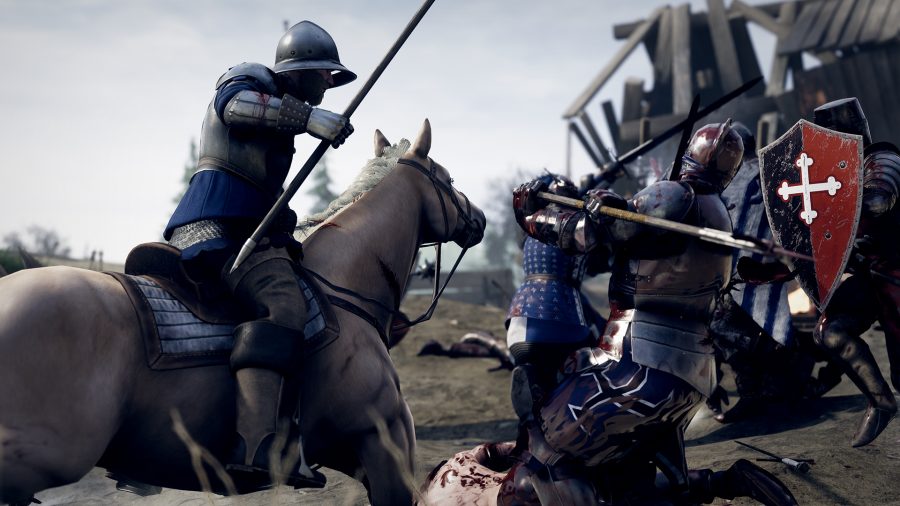 Ok. Time to address the burning question. What’s the point in all these knight games if none of them allow me to prance around the battlefield serenading players with a lute? Mordhau hears you, friend. Mordhau is the answer to your prayers.

Much like noted card game The Witcher 3 built an entire open-world RPG around Gwent, it turns out Mordhau features an entire first-person PvP game built around lute playing. While the core of Mordhau’s combat is a frantic, slash-happy sword-and-board melee, it also features siege battles, horses, ranged combat, and fortification building. Striking the right balance between intense multiplayer action and medieval silliness, Mordhau is your go-to for when you absolutely need to leave your opponents looking like the black knight from The Holy Grail. 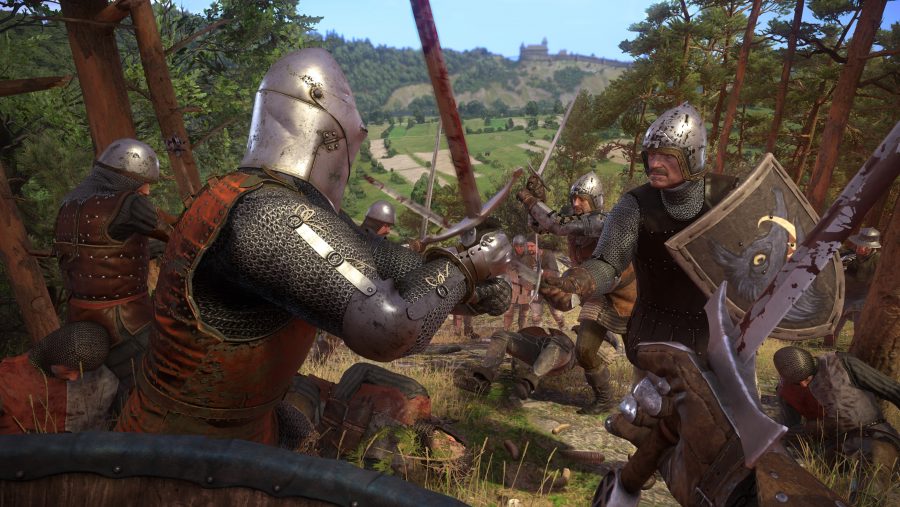 We take it for granted today, as the ancient saying goes, but a single Dorito has more extreme nacho flavor than a peasant in the 1400s would get in his whole lifetime. Life sure was tough then, and it makes you wonder why more medieval games haven’t taken advantage of the setting. Enter Kingdom Come: Deliverance, a game that knows that you need an escape from reality, and so allows you to become a precariously employed twenty-something in a world filled with uncertainty, inequality, and rampant disease. If only, eh?

Kingdom Come: Deliverance sets itself apart from other medieval games by playing into disempowerment as a central mechanic, while still offering the sort of directed, character-and-quest filled world that many dedicated survival games lack. Set in medieval Bohemia, you slip into the sodden boots of Henry of Skalitz, the son of a blacksmith, and immediately throw yourself into such epic quests as “throw poo at man’s house” and “buy some charcoal.” Things soon liven up though, as Henry’s life is soon flipped turned upside down by the civil war sweeping the country.

Medieval Bohemia is both realistically muddy and a real beauty to explore, either on foot or horseback. As far as medieval games that let you live out the story of a decidedly non-heroic individual, there’s little else like it. 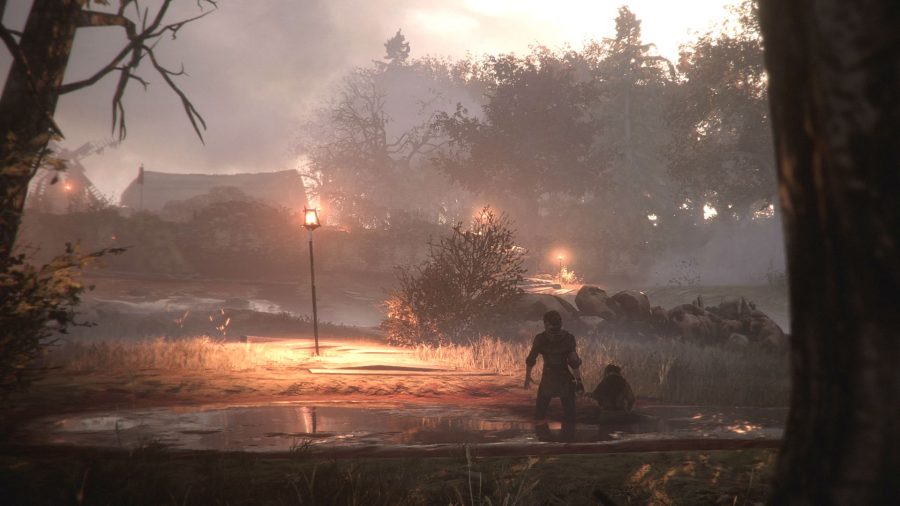 Taking cues from stealth games and action-adventure games, Plague Tale follows the journey of 15-year-old Amicia and her little brother Hugo, trying to survive in a bleak medieval world fallen to nigh-on apocalyptic supernatural rat plague. It’s intense, cinematic and, at times, heartbreaking. Not an easy journey by any means, but one worth taking. 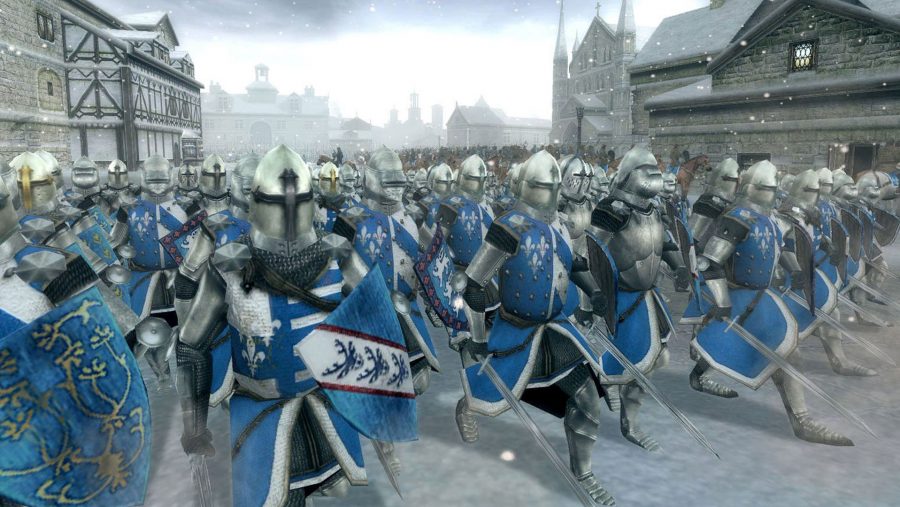 Before there were the zombie pirates and nuke-dropping ratmen of Total War: Warhammer II, there were a bunch of dudes in armour with pointy sticks ready to fight and die for their liege’s right to eat peacock seven times a week instead of only six. Medieval II: Total War is not only a classic of the Total War series, but one of the finest marriages of medieval games and grand strategy out there.

Though perhaps offering a unit roster less diverse than the games that follow it, the instantly recognisable strategic application of Medieval II’s infantry, cavalry, and missile units make it a great entry point into the series for new players. It’s also full of neat features that haven’t made it into the more recent Total War games, like the rousing (often Python-esque) speeches that your generals rattle out before a battle. 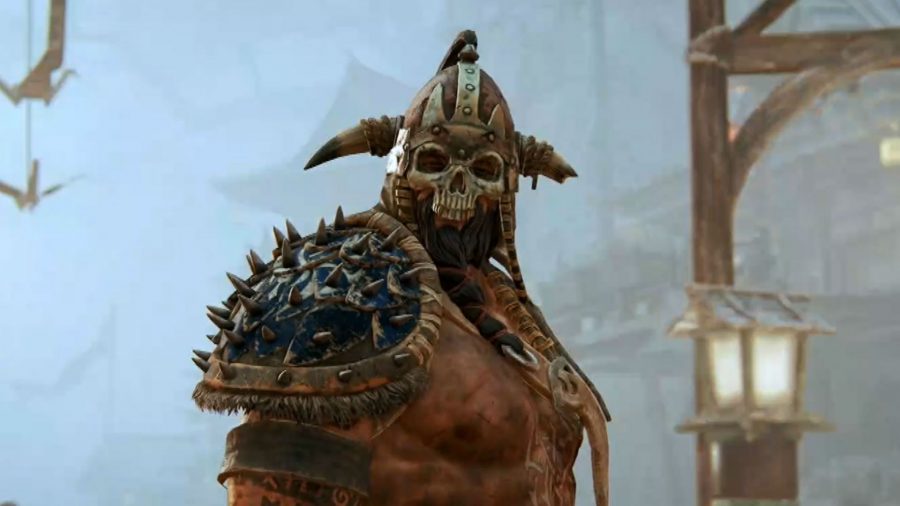 A lot of the medieval games we’ve covered so far have been focused on strategy or simulation aspects. For Honor, however, is all about immediate clash of steel-on-steel. Although it does feature a story campaign, For Honor is primarily a dedicated PvP experience. Players choose one of three factions – viking, knight, or samurai – and take part in intense competitive team battles lent cinematic flair by NPC combatants on all sides.

For Honor has been out long enough to find an established competitive community, so new players to the experience may be in for a steep learning curve. Persevere, however, and you’ll be rewarded with graphically impressive, meaty duels, plus an answer to the age old question “could my samurai dad beat up your viking dad?” 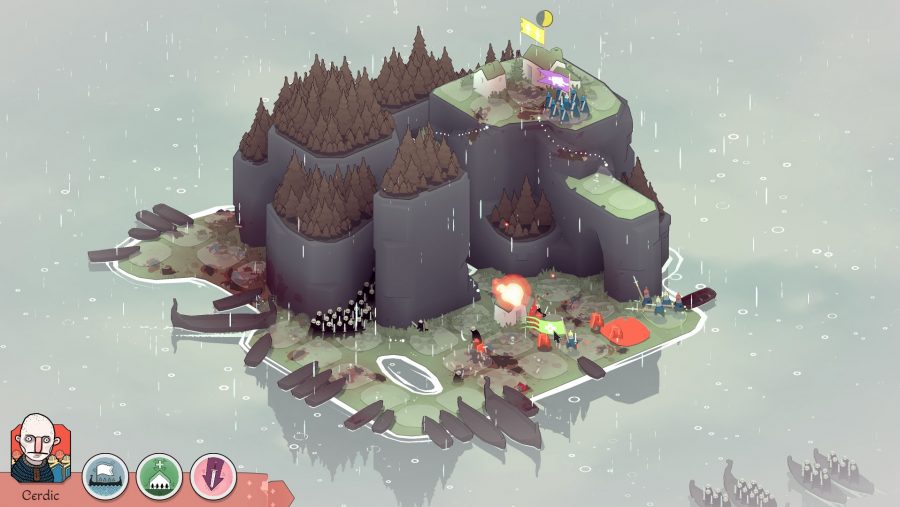 Strategy titles can bring to mind complex interfaces, endless statistics, and Matryoshka doll-esque menus within menus. Bad North is the opposite, and makes its case to strategy-inclined fans of medieval games with its minimal, sleek interface.

Constructed atop the stalwart genre pillars of rock-paper-scissors matchups and unit positioning, Bad North sees you defend a series of procedurally generated islands from viking invaders. Upgrades between missions and steadily increasing challenge and complexity keeps things interesting. Plus, it’s just lovely to look at, at least until your tiny adorable soldiers get axed in the face and the crisp, inviting snow gets stained red with their entrails. As I say, adorable stuff. 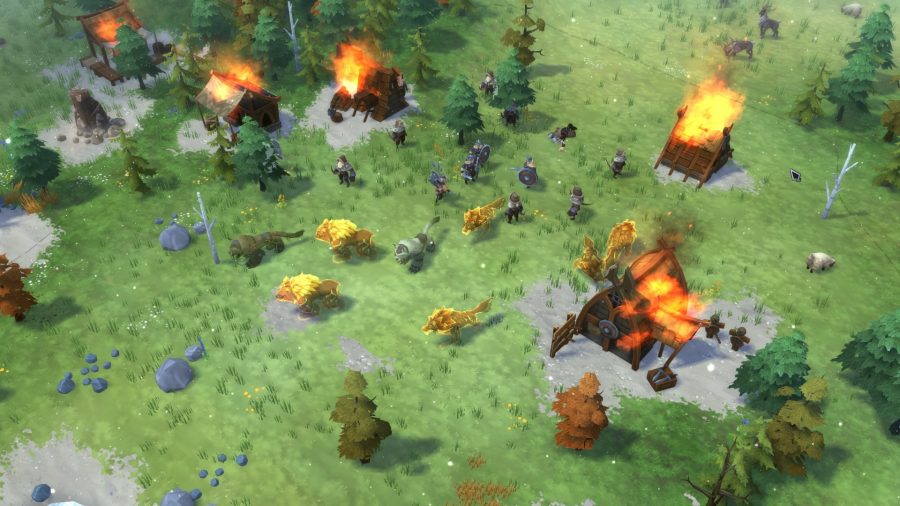 Eagle-eyed enjoyers of viking games may notice that this sounds quite similar to the last game we listed. Yes, they both contain the word ‘north’. And yes, they both feature vikings in some capacity. But while Bad North is a minimalist roguelite egg, Northgard is a fully-hatched RTS seagull, swooping down to steal your time, and possibly your chips.

This isn’t just one of those RTS games of the buildy-clicky-attacky variety either. It’s got that, sure, but also a fleshed-out town management system. New recruits can be assigned various roles in your settlements, and various different victory conditions allow for different styles of play. Also, if you get the DLC, it has battle cats. Perfect. 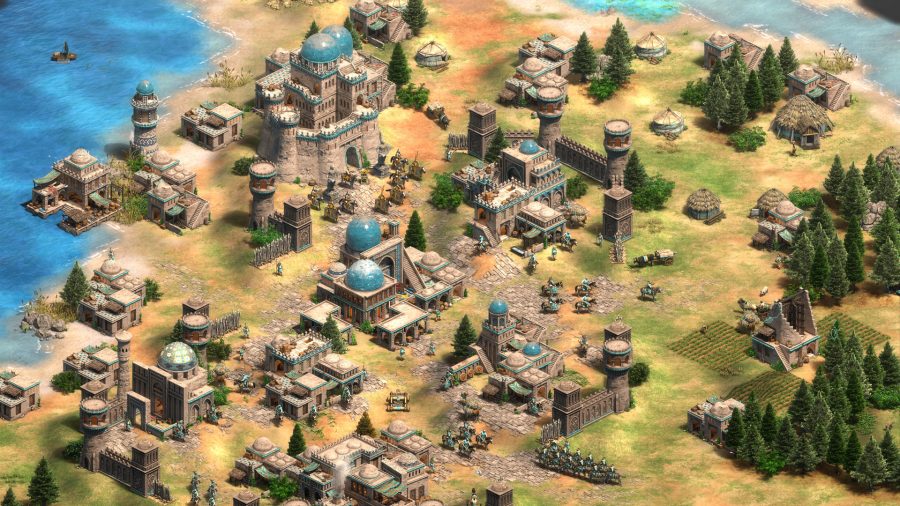 The Age of Empires 4 release date may be getting closer by the day, but that hasn’t stopped the developers whetting our appetites with a platter of spruced-up definitive editions for the well-loved series. It’s not strictly just a series of medieval games, sure, but it handles each time period it tackles so well that we’re saying it absolutely counts.

It’s a testament to how well-made those classic titles were that, not only is there huge anticipation for the next instalment, but the definitive editions have been received extremely positively by both old and new players. They feature classic RTS combat with a massive unit variety, trade, and expansive technology trees. It’s still got a pretty healthy competitive scene, too.

So, there’s the best medieval games on PC, for all your head-chopping, plate mail-wearing, mead-chugging needs. Do feel free to send in your own suggestions via raven, but please remember to thoroughly season and marinate the raven beforehand.