Let’s talk about Cities: Skylines DLC. Skylines is a Paradox game to the core, and a really decent city-building game to boot. The vanilla package alone is perfectly playable, but most of the creative freedom and meaningful options are locked behind expansions; if you want to place bus lines, build a university, or construct a single park with a few trees, the vanilla title is perfectly capable. But if you want to design your own Central Park, or build a full transport hub complete with taxis, metros, trains, and even blimps and cable cars, you will need to fork out money.

As the full package can easily surpass a hundred pounds outside Steam sales, the inevitable question of “which expansion should I get?” raises its ugly head. With a varying degree of quality and the inherent personal interest in each separate package, it can be hard to identify which expansions to spend your hard-earned money on.

That’s where we come in. We looked at every single DLC out there, so you wouldn’t have to. We’ve started this guide just covering the major expansions that add new mechanics. There are a lot more DLCs that are essentially just cosmetics.

These are best Cities: Skylines DLCs: 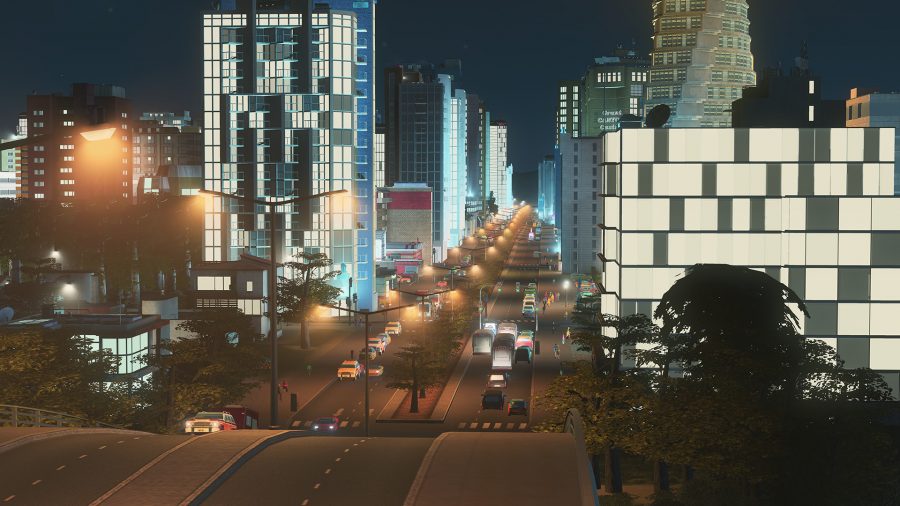 No big city is complete without a booming nightlife and tourism, and Cities: Skylines addresses those very two concepts head-on. The addition of two commercial district specialisations to the base game allow you to set areas on the shoreline as beaches and set zones anywhere as leisure sectors, which function normally during the day but are super active at night (a bit of a weird prospect given Cities: Skylines day/night doesn’t even matter, since its rather flat and doesn’t even reflect rush hours).

In a typical formula for Cities: Skylines DLC, each DLC doesn’t restrict itself just to its main theme, and After Dark also adds cargo hub harbours that connect to train lines directly, an international airport with a metro station attached, bus terminals that allows passengers to switch lines easily, and the introduction of taxi services — as well as bikes, bike lanes, bus lanes, and a Prison to take criminals to when police station jails are too busy. All of those are vastly more important than the actual themed additions of the DLC, especially if you go for a bigger city instead of a small town. 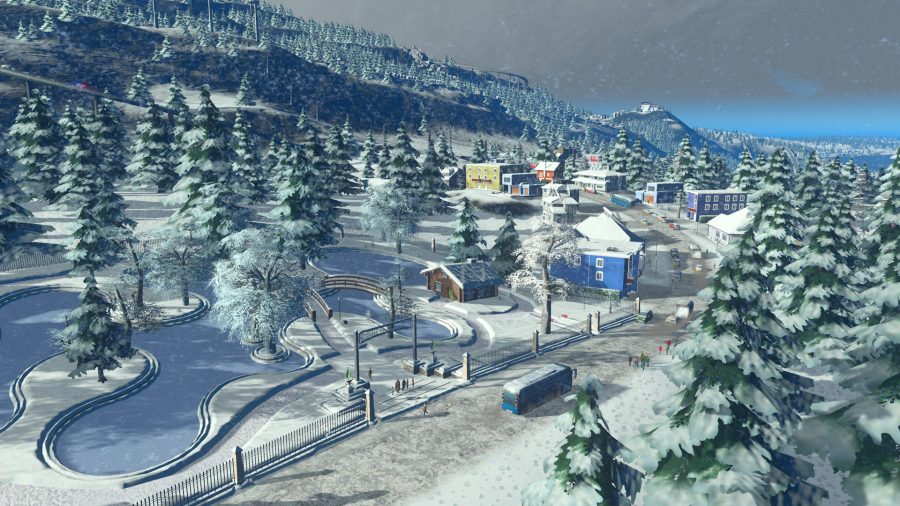 A new temperature mechanic on every map is accompanied by a Winter-themed map covered in snow, forcing players to either see their electricity consumption skyrocket during cold fronts or upgrade their whole infrastructure — heating pipes, centralised boilers, the works — to provide heating to their citizens.

At the same time, trams — that are not that effected by snow — and snowplowers that help keep streets free of white precipitation are added to handle the snowfall caused by Snowfall, but the latter only applies to snow-covered maps as the game can’t dynamically generate them. Personally, I feel that’s a bit of a mixed opportunity — it would be vastly more interesting if snow fell over time as seasons changed, instead of either playing on a map perpetually covered in snow or not, but hey. 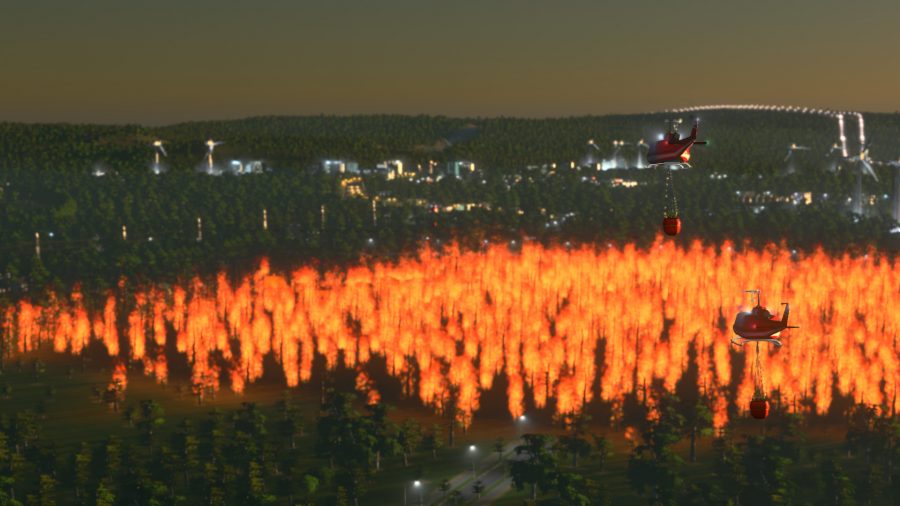 This one straddles the line between fun and annoying. Fun because events look cool and cause a moment of panic as they head the area and you’re never sure of the impact they will generate. Annoying because some disasters, like sinkholes and earthquakes, screw up the terrain to the point they cause bugs on the map — I had more than one geological disaster rip a hole in level geometry and expose the blue nothingness of the game’s engine below it — and it was *pretty* goddamn difficult to fix even with the included terrain editing tools.

Still, the whole disaster infrastructure is pretty fun. From the amazing looking Disaster Response Unit HQ that dispatches helicopters to rescue survivors to the many early warning systems like Tsunami Buoys and Deep Space Radar Dishes, building up your disaster team provides a level of “government” feeling that Cities: Skylines in general simply lacks — you are building what feels like a federal agency, dedicated to protecting its citizens with measures, countermeasures, and coordinated responses — it’s awesome.

Add to it a new radio mast mechanic that is affected by terrain whose signal tells citizens to evacuate and the ability to construct big and small emergency shelters complete with evacuation buses, and you got one of the most interesting DLC in the pack. 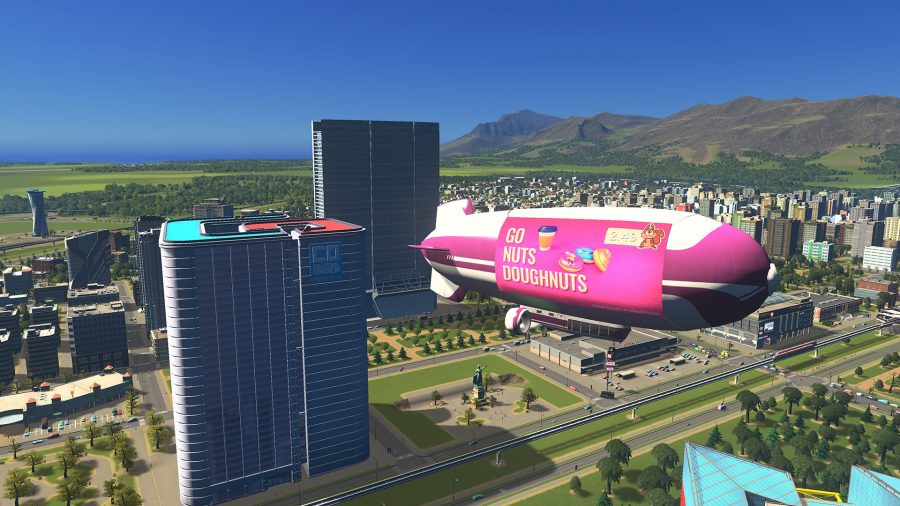 For any logistic-lover, this one is a must. New roads and canals allow you to meticulously design your city’s pathways, while the addition of ferries, blimps, monorails, and even cable cars as transportation methods help make the city look super alive.

To connect all that, you can even build transit hubs that integrate those services, from a bus-to-ferry small terminal to a huge rail hub that connects trains and metros and monorails all together. Besides, commuting in a blimp must be *awesome*. 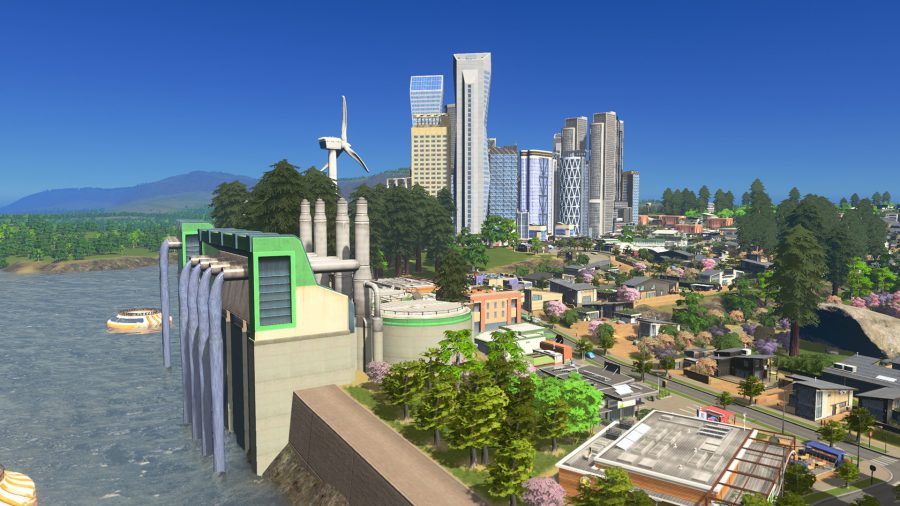 This is mostly a cosmetic DLC, but not in the classic sense — with several new assets dedicated to environmentally-sound structures, Green Cities helps make your city prettier by generating less pollution.

Anyone that played the game for at least an hour is familiar with the need to build sewers, as people generate an *insane* amount of poop. Usually, that translates as either an in-land treatment plant that turns the green, grassy, sexy soil into a dull, ugly sandy beige or a sewage outage pipe in a river that turns everything downstream into a most definitely sickening brown liquid. Besides making your city look greener with trees and natural architecture, this DLC helps you stop all that pollution ugliness.

As someone who had tsunamis and badly built dams flood whole neighbourhoods in brown poop water, I love the fact this DLC lets you build sewage plants that remove 100% of the pollution that goes out of your city. Granted, they cost a tremendous lot and require a big progression milestone, but the game gives you the choice and I am glad for it. Plus, you get a bunch of nice green stuff ranging from normal parks to high-rise buildings with literal trees built into them, and visual variety is always a great thing to have. 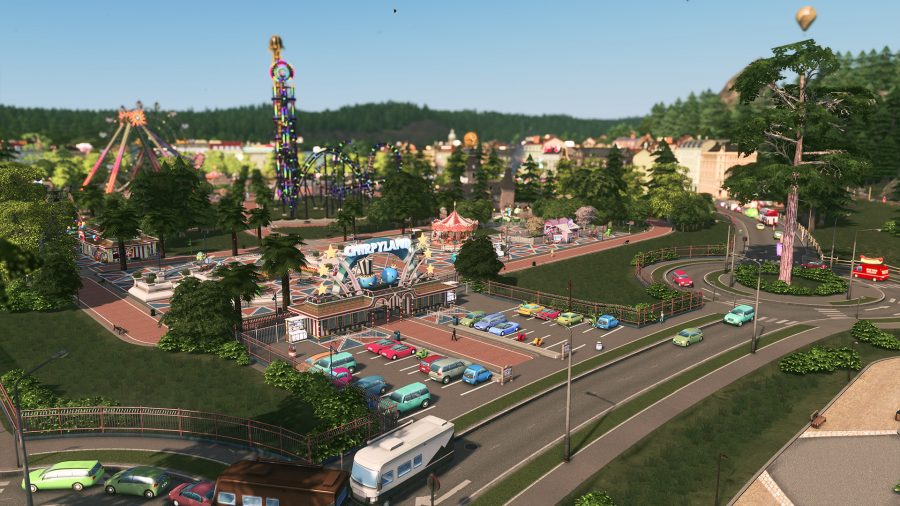 Hot off the heels of Green Cities, another DLC dedicated to making your towns closer to nature is here. Parklife is all about designing and maintaining parks — not just the small kind of preset asset you plop out somewhere, but actively zoning out huge areas and intricately designing the layout, from roads and pedestrian pathways to the fences.

Parklife brings in a new area painting tool very similar to District one in the base game, but which integrates to the objects that can be placed inside it and levels up over time and usage. This tool (which would fit perfectly in Stellaris since they screwed up sectors, btw) lets you draw parks of different types, including nature reserves, amusement parks, and even zoos, alongside all the infrastructure and maintenance buildings you need.

Buildings can be placed besides pedestrian roads while props can be placed anywhere in a park district, while a new sightseeing bus line a castle monument (the Castle of Lord Chirpwick) gives tourists and citizens both a way to see something, and something to see. You can even customise routes and set ticket prices for both vehicle and walking tours, letting you fine-tune the way everyone interacts with your city parks. 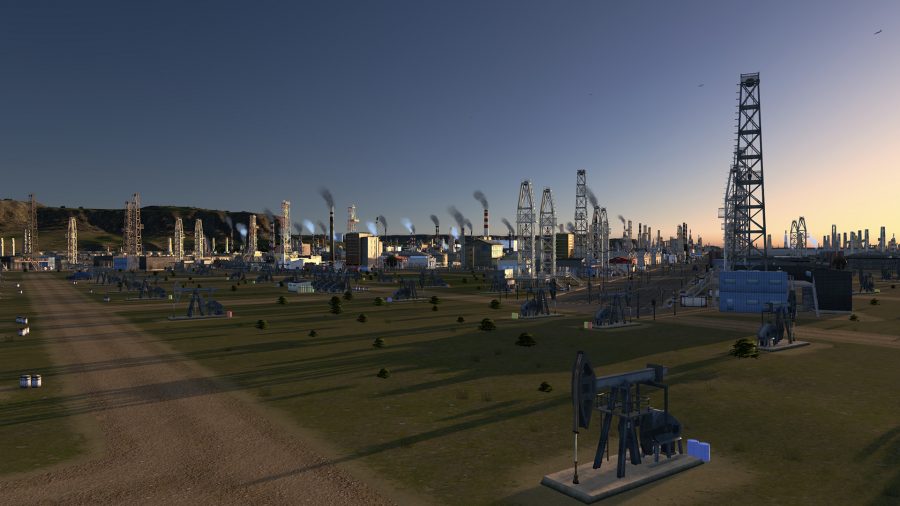 This one is a bit less my style, but it should hit the Factorio/Satisfactory/Terraria fans right in the sweet spot. If you thought “people” and “citizens” was too boring of a concept for a city-building game, Industries lets you focus on… well, industries.

From harvesting oil, forests, and minerals to planting your own farms and processing all that stuff into a “refined” product, the DLC lets you build whole industrial districts and manage the production chain from source to exportation. It also builds off the Parks’ DLC painting map tool to set an industry area with special industrial buildings, and even adds industrial warehouses and a cargo airport to further drive the logistic point home.

Completely unrelated, this DLC also introduces Mail services, with Post Offices and Post Sorting Facilities served by vans and trucks that deliver a lot of mail around the city. It even keeps track of how many mail is there and how much is going around every week, which is pretty sweet. 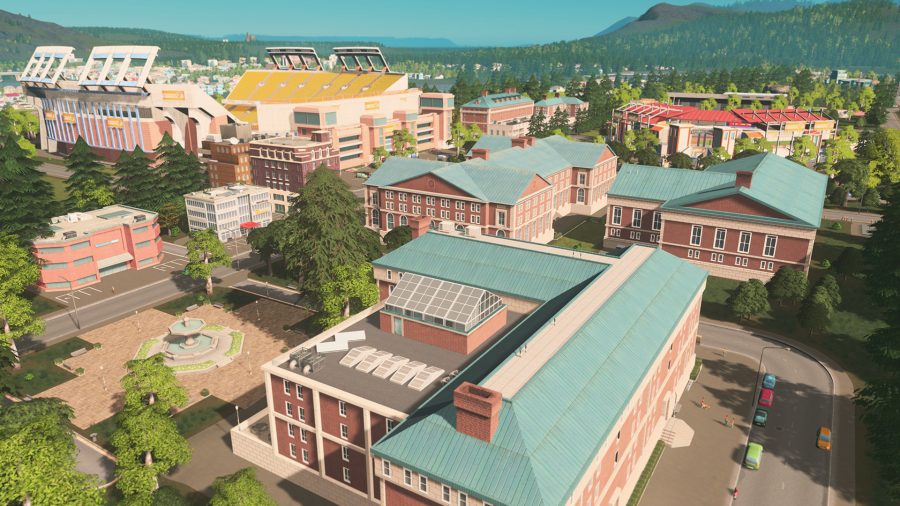 Yet another DLC benefited by the painting map tool mechanic, Campus is all about cordoning off an area of your city and turning it into a bonafide university hotspot. Administration buildings, dorms, book clubs, even groundskeeping — you got everything you need to create your own Trade School, Liberal Arts, and University campuses.

As your uni get new students and achieve academic objectives, the reputation of the campus grows and unlocks new buildings, allowing you to further specialise the college and the city surrounding it (or near it). Museums, sports stadiums, and even graduations can be arranged, and you can straight up customise your sports teams’ jerseys, vehicles and more with the money you generate from selling tickets to their events.

Cities: Skylines took a while to hit a stride after its first two expansions, but Campus is definitely one of its stronger contenders. 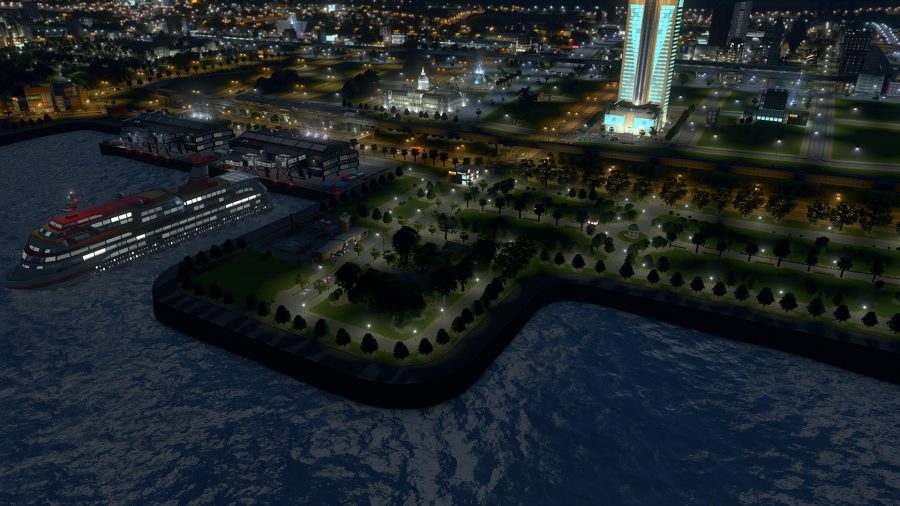 After Campus, Paradox seems to have hit a bit of a slump. This DLC took over a year to come out after campus, and it is exceptionally flat and disjointed, similar to Cities: Skylines first “expansions”. This is one of those, bringing 1. An intercity bus terminal to receive and send buses outta town, 2. A private aviation club so citizens can take small Cesnas up for recreational flying, and 3. A fishing industry.

If you think those are absolutely unconnected, you are utterly right. I don’t know what the theme about this DLC was supposed to be, but I do know that 1. Small planes are nice cause aviation is awesome, and 2. The fishing industry behaves in a lesser yet similar way to industries in the Industry DLC, and it lets you manage fishing boats at sea and fishing farms to create a town focused on fishing.

Aside from the planes adding more visual variety and flybys through the city, I found this DLC a bit unnecessary — but maybe you’re one of those people who can’t get enough of buses or just really want to build your own fishing zone, in which case you might like it more. 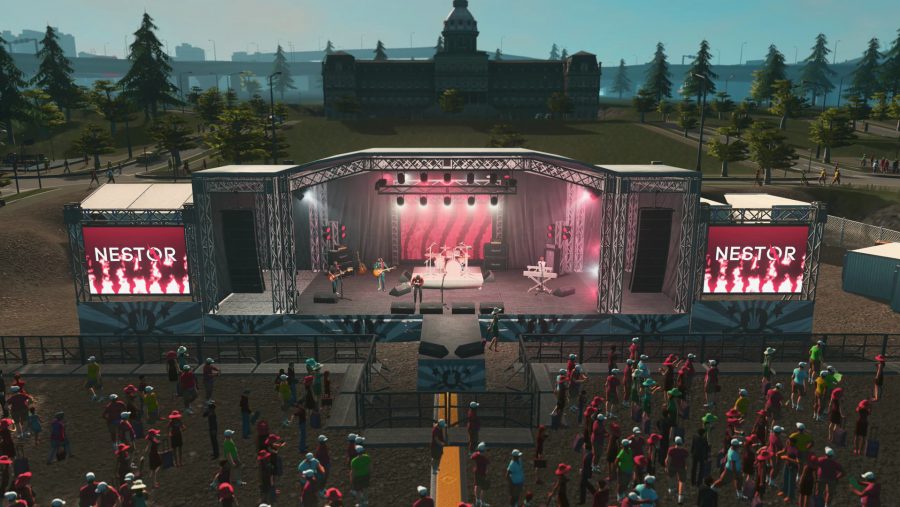 This mini-expansion is quite interesting, as it covers an aspect hitherto ignored by Cities: Skylines — music. Starting with a festival ground with a small stage and steadily levelling it up to host bigger and bigger concerts with more and more crowds, this DLC lets you manage the advertisement, ticket sales, and lineup of the shows you throw together.

Alongside the new Music Club store and the Fan Zone Area for festival merchandise, and you got yourself a tight little package that lets you cater to your citizens entertainment needs.