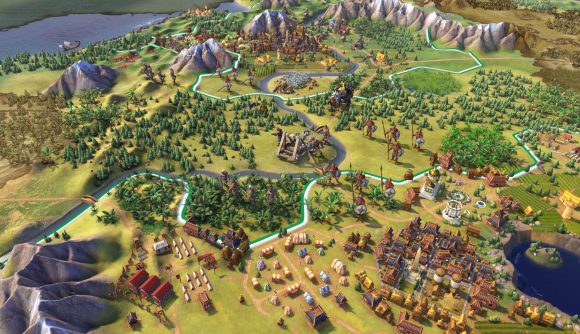 One of the decisions you’ll always be faced with in a game of Civilization VI is when to ‘chop’ a natural resource tile near a city – the yields you get from this scale up drastically as you research new techs in the 4X game, so the question is always a matter of how long you can afford to hold off before cashing in for as big a bonus as you can rake in. The Harmony in Diversity mod removes this massive scaling, encouraging rulers to develop land without planning to eventually strip it of its natural benefits.

There are actually a bunch of changes introduced in this overhaul mod, but the changes to chopping and plunder might be the biggest. The idea is to encourage new strategies for development, and provide more incentives for building up specialised cities. The tech scaling for chopping and plundering resource tiles has been removed, and the modders have also rebalanced basic tile yields across the board. Popular maps have gotten larger fertile areas, and structures like factories now produce more regional effects.

The modders have also changed the way the cost of building city districts scales up – rather than scaling with the number of techs and civics you’ve researched, they’ll instead increase with each new district built.

Religions have gotten a rework to allow players more choice in beliefs, there are brand new policy cards, and universities and banks radiate out the way factories do in the vanilla game. Taken altogether, these create a whole new approach to Civilization VI that’s probably worth checking out if you’re getting a bit bored with the vanilla rhythm.

To use Harmony in Diversity, you’ll need the Rise and Fall and Gathering Storm add-ons for Civilization VI. The modders also recommend using a bespoke collection of compatible UI mods to enhance the experience.