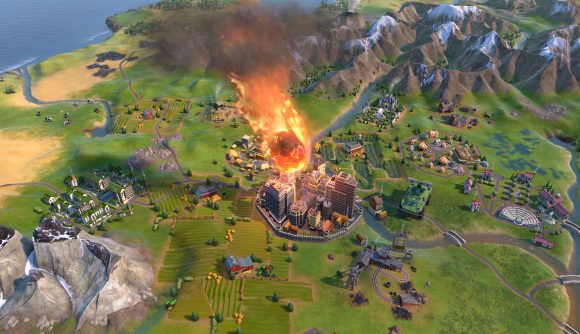 At its core, Civilization VI is a game about numbers. A unit’s battle strength versus another unit, how many cities you have, the potential tile yields of any given hex. We like numbers, especially high numbers, and if this past year has proven anything, it’s that Civ 6 likes them too.

Last week saw the release of the final premium add-on in the strategy game’s New Frontier Pass – a year-long experiment that involves an alternating schedule of paid micro-expansions, and free updates. Among other things, the final pack introduced the 50th new civilisation into Civ 6 – Portugal. Led by Joao III, Portugal is a civilisation themed around maritime trade and exploration. In short, they like money. Lots of money.

Ridiculous Civ 6 tile yields is something we’ve looked at before, but now we’re here to tell you about ungodly amounts of gold generation. Some of it does come from tiles, but Portugal is also able to create more international trade routes than any other civ, and get bonus gold from those routes. If you start adding in various multipliers from pre-existing systems, and even the recently added ‘corporations and monopolies’ game mode, things start to get out of hand.

A casual search of the r/civ6 subreddit over the past 24 hours or so alone brings up several threads of people showing off their Portugal games. These two managed just shy of 5k per turn each, while a third person managed 6,900 gold per turn. And this absolute weapon has somehow managed to achieve a per-turn gold income of 23k:

Diety Tons-o-Gold challenge with Portugal. ~23k per turn 😀 from civ

It’s nice to see Portugal is such a balanced and reasonable civilisation to play with. Mali, led by Mansa Musa, is another Civ 6 civ who was introduced in the Gathering Storm expansion that’s also capable of some pretty silly income levels.

The general consensus so far though is that Portugal is able to generate more gold more quickly than Mansa Musa is able to, if not outright beat Mali’s heights. Here’s another phat gold yield, to the tune of 13K per turn:

Diplomatic victory with Portugal took quite some time, but look at that gold. Perfectly balanced civ. from civ

We wonder if Portugal will end up getting rebalanced come the final free update at the end of April, which looks to tweak around two-thirds of Civ 6’s 50 civilisations.