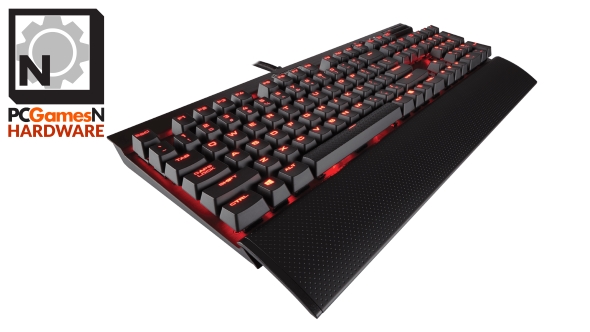 You know that feeling when your keyboard just isn’t keeping up with your lightning fingers? Frustrating, eh? Well, no more – Corsair’s K70 Rapidfire features the speediest key switches in the gaming world.

The perfect companion for your fancy new keyboard is good mouse. Check out our pick of the best gaming mice to buy right now.

Where most mechanical keyboards traditionally come with your choice of Cherry MX switches in red, blue, brown, black, cerise, peuce, onyx or sapphire trim (I might have made some of those hues up…) the $130 (£110) Rapidfire spin of Corsair’s mighty K70 comes with a new kind of mech switch. It’s still of the Cherry-manufactured variety, but is one of the new Cherry MX Speed variants.

The MX Speed is essentially the same as a standard Cherry MX red switch – sporting the same 45cN actuation force and 4mm travel – but has a much shorter actuation point than the rest. I say ‘much shorter’ but when a standard mechanical switch has an actuation point at around the 2mm mark you might not think lifting it by 0.8mm is that much of a change. 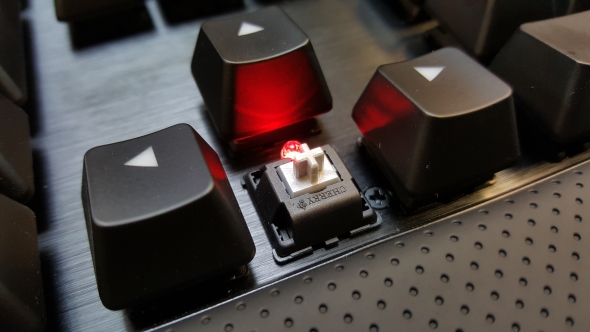 But with the MX Speed switches actuating when the key is depressed by just 1.2mm the time it takes to register a command is then 40% quicker with this new design.

Granted, that’s not going to make a huge difference in-game to the fast majority of us PC gamers. I can’t see it suddenly improving my laggardly LoL prowess – I’d need the sort of serious coaching our Matt’s getting to make me any better. But if you are serious about being competitive in the toughest games then it might just give you that little bit extra edge. 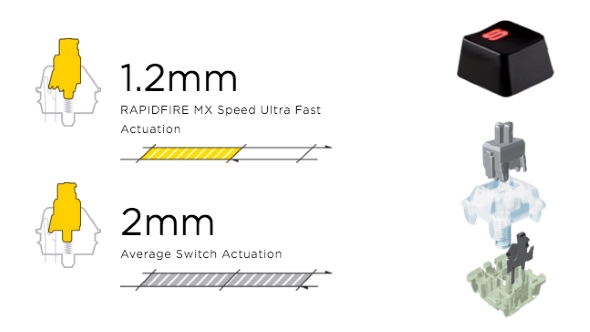 What it might do for the rest of us though is change the way we type with a mechanical switch board. Because the actuation point is so much higher you barely need to press the keys at all to generate a response, which means you can be a lot lighter in your touch. In turn that means you might become a quicker typer, but might also will stop annoying the folk around you who have been cursing the day you became so enamoured with loud, clicky, mech switch keyboards…

Elsewhere the design is traditional Corsair K70 loveliness. It’s still my all-time favourite keyboard design thanks to the simple, stylish yet seriously robust brushed aluminium base the keys seem to float above. It’s pseudo-industrial design with not a little flair.

The board I’m testing is the standard single colour LED version, not the Rapidfire RGB flavour with multi-coloured per-key lighting, and I much prefer the simpler aesthetic. The straight Rapidfire version is only available with red LED backlighting, but by sticking to a single colour you don’t get the slightly weird gel effect where the clear plastic of the RGB switches bloat out under the keys. It’s also significantly cheaper – the RGB version of the Rapidfire retails for $170 (£150) and all it can offer are 16.8m colours… 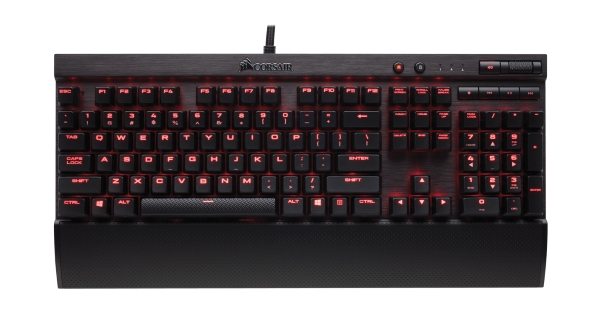 The K70 Rapidfire still comes with discrete media controls, including the much-copied physical scrollwheel for the volume, with a fat mute button right next door. There’s also the super-handy USB 2.0 pass-through, which was sadly missing from the original K70 RGB, and the now-ubiquitous N-key rollover. That means you can press ALL THE BUTTONS and the K70 will still recognise them and in what order you face-rolled them.

Aside from the slick new switches then there’s not really anything else new to the K70 Rapidfire recipe, but if it ain’t broke – and is generally outstanding – then why fix it? If you’re looking for a new mechanical switch board, and like the idea of your fingers leading a lighting-quick, blurry foxtrot across the keys, then the K70 Rapidfire is a great option. Especially without the extra expense, or aesthetic bloating, of all that RGB nonsense.