Corsair’s K70 gaming keyboard has had so many different iterations since the original launched in 2013 that it was only a matter of time before the numpad was discarded in favour of a tenkeyless design. But does the K70 TKL do enough to differentiate itself from Corsair’s other 80% offerings? If you’re a casual gamer then it’s a hard maybe, but it’s definitely worth it if you’re in the competitive scene.

Stating the obvious, the K70 TKL takes up less space on the best gaming desk than a full size keyboard at 360mm (6.46in) long, but that’s not the only new feature. It’s the second Corsair keyboard to feature an 8000Hz polling rate after the even tinier K65 RGB Mini, meaning it registers keystrokes up to eight times faster than most other gaming keyboards – or twice as fast as Corsair’s flagship K100.

If this doesn’t scream that it’s engineered with competitive gamers in mind, it even has a dedicated tournament switch on the back that disables anything that could be considered a violation under competitive rulesets. That means no accidental macro activations that can get you disqualified, and no distracting RGB lighting animations.

Aside from these additions, it’s pretty much business as usual – if it ain’t broke, don’t fix it I guess. 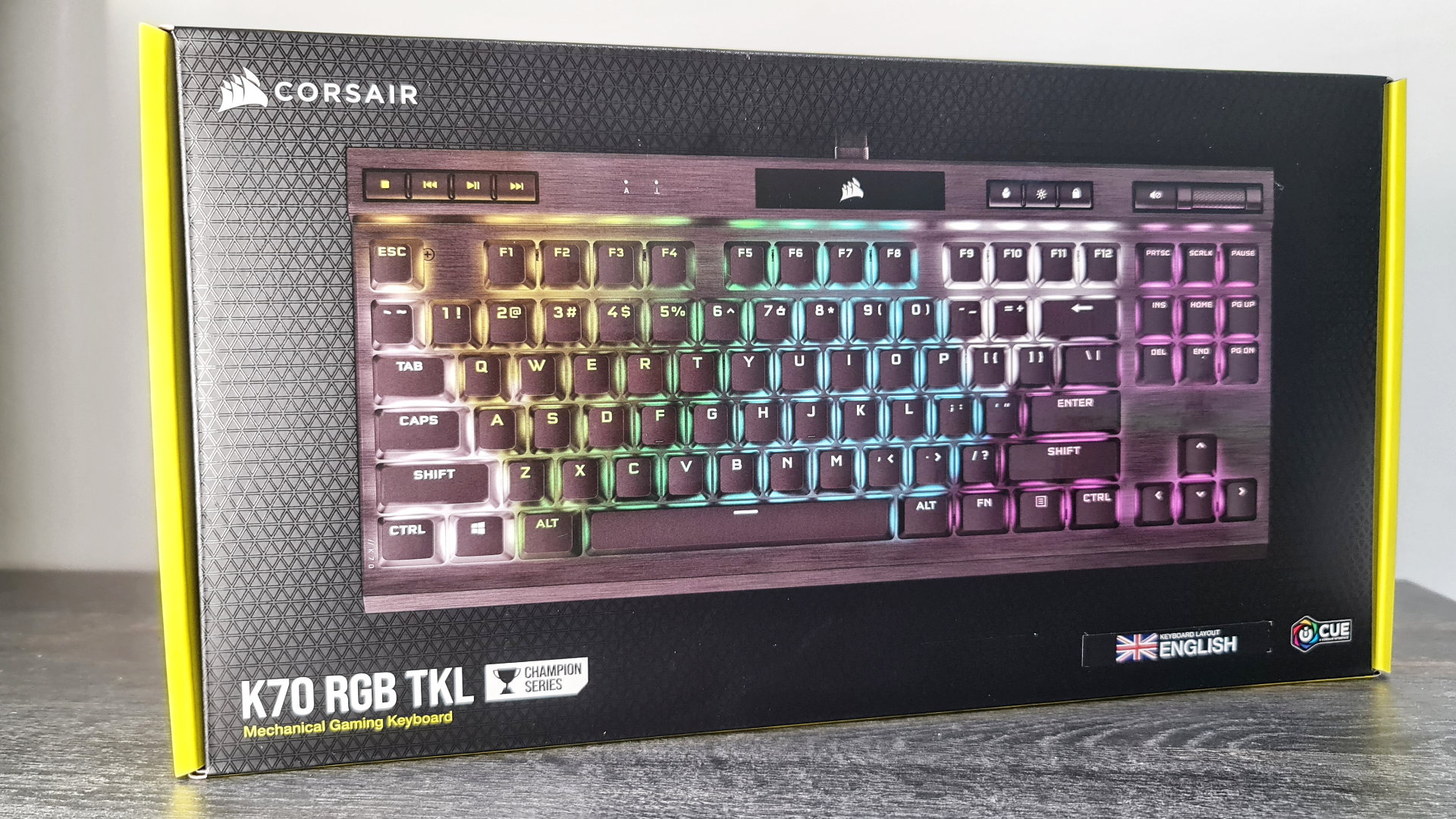 The K70 TKL takes much of what we love about its full-sized counterparts, for better or worse. It has the same sturdy brushed aluminium frame and overall shape with a raised bar at the top, and even packs a full set of media keys – which is particularly impressive given the reduced form factor.

No special keycaps are present this time around, which is a shame given the K65 RGB Mini’s gorgeous custom spacebar. It does include a full set of double shot PBT keycaps, however, which makes it feel significantly more premium than the cheaper ABS keycaps on the tenkeyless K65 RGB Compact. Despite the difference in build quality, it features the same understated lettering, favouring a more modern look over the blocky, outdated sci-fi font you’ll find on older boards.

As someone who spends more time clicking away at the keyboard that I’d care to admit, I’m disappointed at the lack of a wrist rest, but this shouldn’t be a deal breaker. You can always purchase a cheap, third party one if it’s important to you, and popping the feet out to elevate the keyboard makes it feel comfortable enough. You can’t adjust the incline, though, which won’t surprise you if you’ve used other Corsair keyboards. 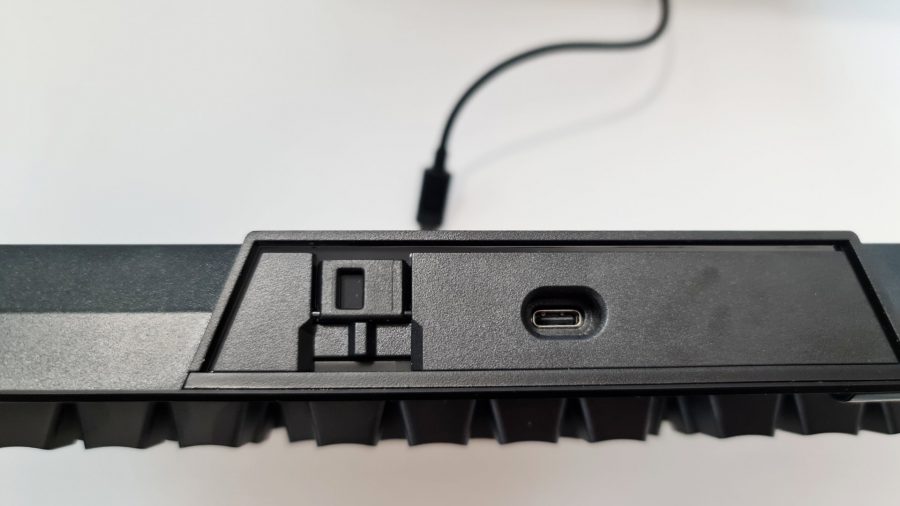 Corsair provides a tough braided cable that shouldn’t fray or break easily when you’re travelling. Losing it may prove problematic, however, as the USB Type C housing on the keyboard is indented, meaning you can’t fit just any wire in there as it needs to be thin enough to reach the connector. What makes this an even stranger design choice is that Corsair doesn’t seem to sell replacements on its website, so I’m not entirely sure what the purpose of this is.

Fans of tactile or Corsair’s OPX optical switches are snubbed once again, but the K70 TKL has a wider range of linear mechanical Cherry MX keys to choose from than its predecessors, with Red, Silent, and Speed options.

Thankfully, it doesn’t come with the same shortcut-filled learning curve as the K65 RGB Mini, but there’s a slight adjustment period if your keyboard sits closer to your mouse pad than you’re used to. This is just a familiarity issue, however, as the distance between both of your hands plays a big part in your reaction time. After a week, it’s barely noticeable. 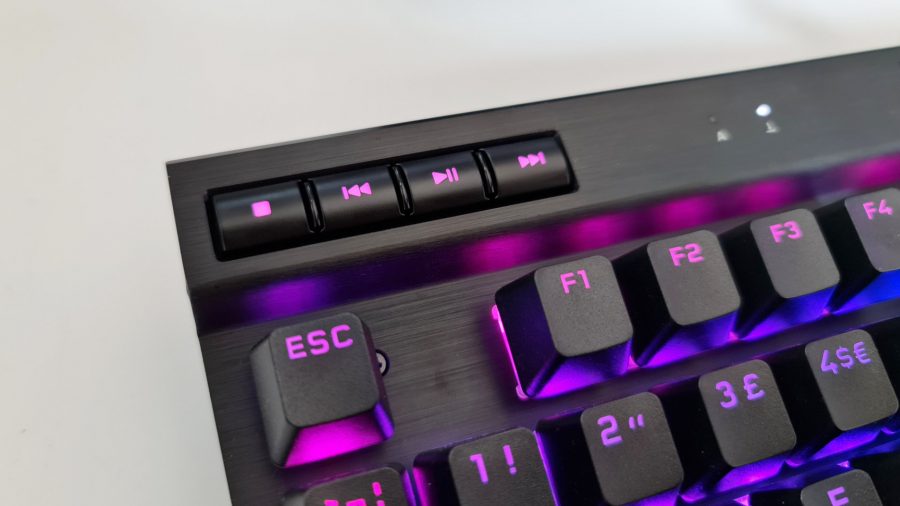 As you’d expect from a premium keyboard, full N-Key rollover and anti-ghosting technology are present, but it’s the Axon-powered 8000Hz polling rate that sets it apart from similar boards – at least on paper. After switching from its default 1000Hz setting to the higher polling rate in the iCUE software, both Rainbow Six Siege and Outriders feel exactly the same as they did before.

8000Hz might fare better in the hands of a pro with reflexes fast enough to make use of the 0.125ms response, but the technology is sure to be more noticeable with the fluid movement of the Corsair Sabre RGB Pro gaming mouse rather than the individual presses of a keyboard. You’ll also need to note compatibility, as Corsair suggests pairing 8000Hz devices with a modern processor to compensate for the higher CPU overhead. I didn’t notice as many spikes with the keyboard on my Intel i9 10850K, but this could be a generational thing.

The tournament switch is another feature that isn’t likely to see day-to-day use, but the benefits are instantly visible. It’s non-intrusively placed next to the USB input at the back, and once hit, it resets the keyboard back to a default state without custom macros and forces a static lighting colour, which you can customise in iCUE. You can even flip a piece of plastic up to make sure it’s secured and won’t accidentally knock back. It might be niche, but it’s a welcome design element that I hope to see on more keyboards in the future. 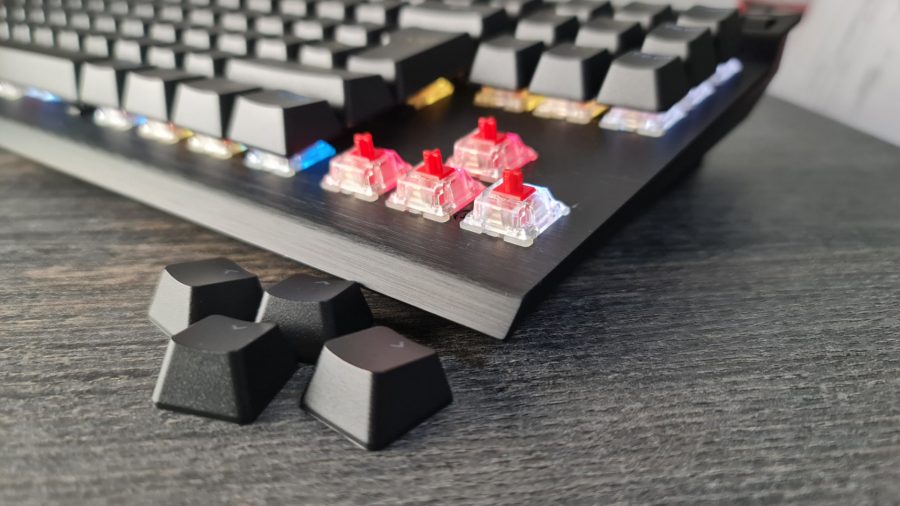 So, is it worth the $139.99 / £139.99 asking price? It costs the same as the K65 RGB Rapidfire Compact with Cherry MX Speed switches and is $10 more expensive than the K65 RGB Compact containing Reds. That’s worth it for the double shot PBT keycaps alone without the esports-focused features on top, but it’s worth pointing out that those alternatives come with a wrist rest.

It’s a big jump from Corsair’s entry-level tenkeyless K63 Compact at $79.99 / £75.99, which sports Cherry MX Red switches and the same media keys. But the cost is justified as the K70 TKL is in a different league with a metal chassis instead of plastic, RGB lighting instead of static red, and several features added for good measure.

It’s not quite as refreshing as the K65 RGB Mini’s beautiful full body LED panel, but the Corsair K70 TKL is still a solid gaming keyboard that comfortably fits into the current line-up. It adds just enough to topple the similarly priced SteelSeries Apex 7 TKL as the best gaming keyboard if you want a tenkeyless design for gaming, particularly if you want to be ahead of the curve with the fastest response on the market.

While its core features are niche, it's still our favourite tenkeyless gaming keyboard with a fair asking price.