Lightweight mice are increasingly popular in competitive games like Rainbow Six Siege and CS:GO, but shedding grams isn't the only trick up Corsair's sleeve to help you hit your shots quicker. The new Sabre RGB Pro is Corsair's first gaming mouse with a whopping 8000Hz polling rate so that movements register more accurately.

It's the second mainstream gaming mouse after Razer's Viper 8K to feature an 8000Hz polling rate. If you're unsure about what that actually means, then bear with. The polling rate is how often the position of the mouse is registered per second – so in this case, your PC gets updated on the position of your mouse 8000 times per second. The current standard for gaming mice is 1000Hz, and while the bump to 8k is hardly perceptible, it's intended to improve smoothness and accuracy for sudden, sweeping mouse movements on the best mouse pad for gaming.

Priced at $59.99 / £49.99, the Sabre RGB Pro is a basic-looking clicker on the surface. Unlike some other lightweight mice it has a full body rather than a honeycomb design, with a solid mold consisting of two programmable side buttons, minimal RGB lighting, and a DPI LED indicator on the side. The braided cable is a welcome addition, too.

In terms of build quality, the Sabre RGB Pro is plastic, but feels sturdy with no rattling or creaking under pressure. The shape is perfectly set up for either palm or claw grips. It’s a no-frills design that doesn’t shout about the tech inside it, but RGB lighting keeps it from looking like an office mouse – and at just $5 / £5 over the non-RGB Sabre Pro variant, why wouldn’t you? To keep weight down, there are no rubber side grips here, but the plastic on the mouse buttons has a much grippier, rough texture, so there’s little slipping when clicking, even if you get sweaty hands.

You’ve got no macro buttons bar the two side buttons, but this is a mouse aimed at competitive FPS games where they’d be a little wasted, compared to MMOs.

The highlight of the Sabre RGB Pro is its 8000Hz polling rate, achieved with Corsair’s new Axon Hyper-Processing Technology, which utilises an SoC built into the mouse. It’s set to 1000Hz by default to avoid compatibility issues, but switching that to 8000Hz in Corsair’s iCUE software increases this eightfold. This sounds impressive when paired with an 18000dpi Pixart PMW3392 sensor – at least on paper.

The DPI button on the top of the mouse lets you switch between three different profiles, which can tweaked through the iCUE software. There’s a handy three-LED indicator on the side, which lets you see which profile you’re using at a glance. 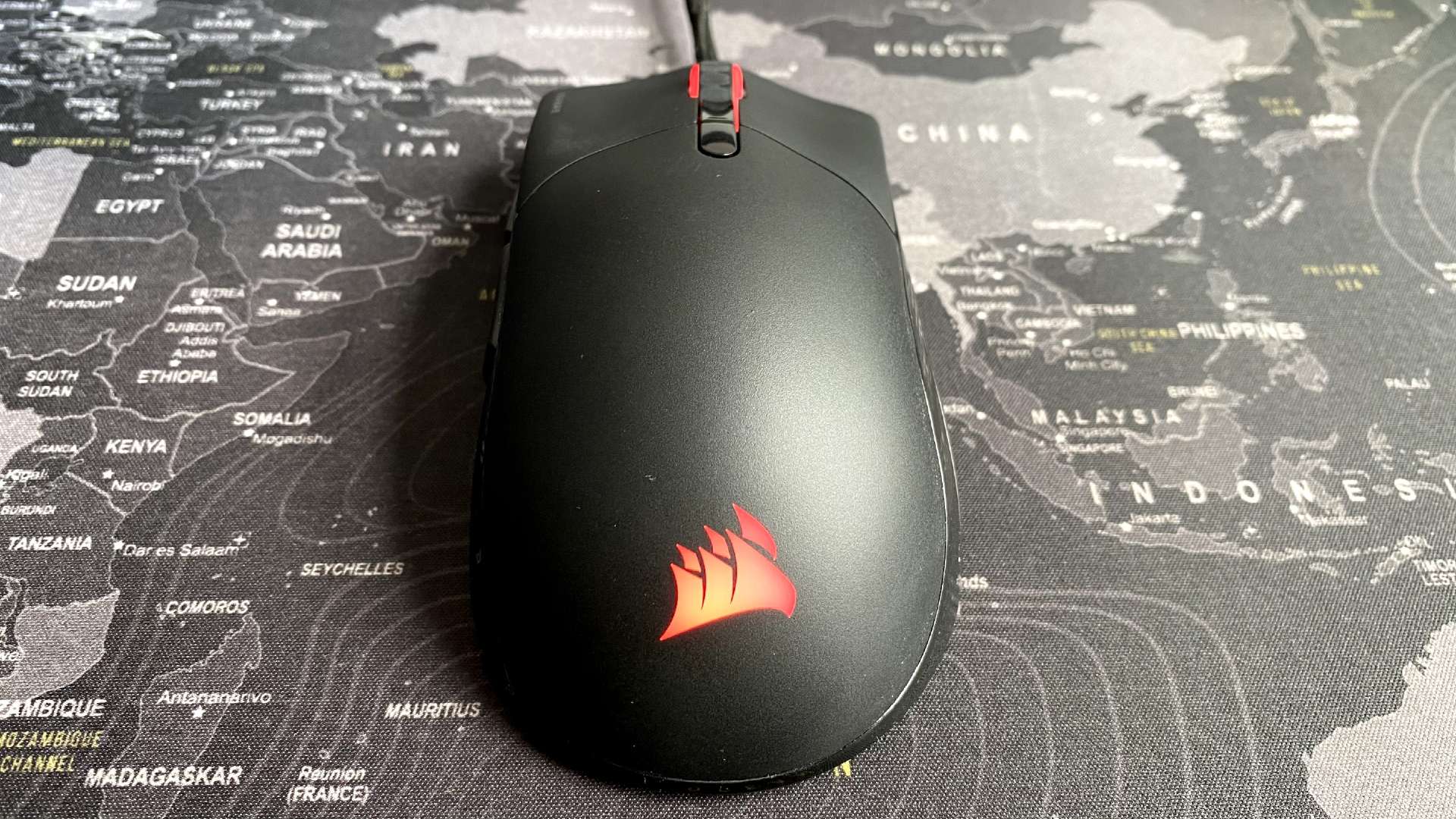 These internals are particularly impressive when considering the low $60 price tag, as similarly priced lightweight mice, such as the SteelSeries Aerox 3, make do with lesser 1000Hz sensors that cap out at 8500dpi. The left and right mouse buttons use Omron switches that feel precise and solid, with little travel – further cementing this mouse as the perfect companion for those of you with fast reflexes.

There’s one caveat if you’re going to enable the 8000Hz polling rate, though – it’s incredibly CPU intensive. Corsair recommends you use the best gaming CPU for the ideal experience, such as a recent generation Intel Core i7 or AMD Ryzen 7, as the feature demands a lot of processing power, especially if you’re pairing it with the 8K Corsair K70 TKL gaming keyboard. 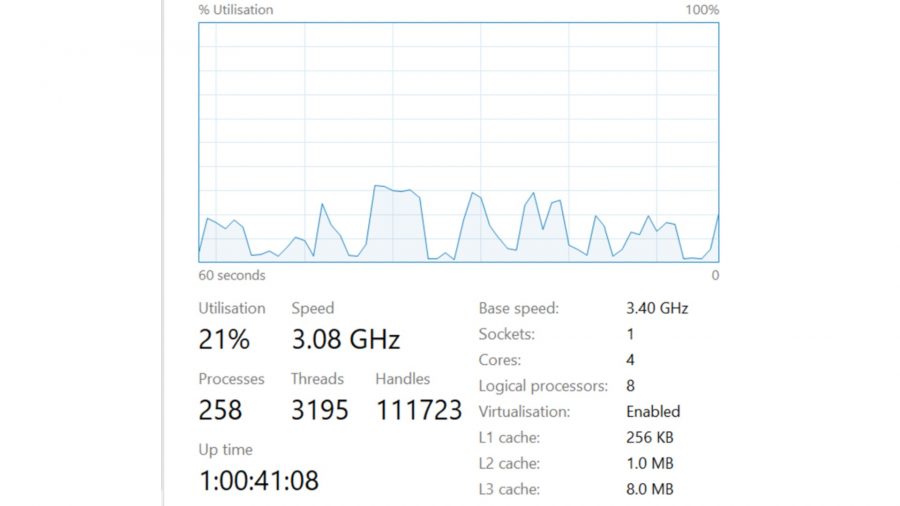 No kidding. As you can see from the graph above, CPU utilisation sits at 2% when idle on my i7 6700, but rapid movements of the mouse see utilisation intermittently shoot up to 30%. Fortunately, this doesn’t affect less demanding titles like CS:GO. You can use the mouse at its default 1000Hz out of the box if your PC isn’t up to scratch, but you’d be missing out on the flagship feature. At that point, you could probably grab a cordless Corsair Harpoon RGB for the same price – which is the best gaming mouse if you want to go wireless on a budget.

With hyper polling enabled, is there anything to actually be gained in competitive play? First off, if you’re playing on a 60Hz monitor, you’ll fail to notice much difference. Switch to the best gaming monitor with a high refresh rate panel, and you might see smoother movements across the screen. It’s not as much of a game changer as switching to a high refresh rate monitor, however, and I can’t say I noticed a performance improvement in my own gameplay. At a competitive level, I see how it could make a difference, particularly with sudden flick-shots and adjustments. 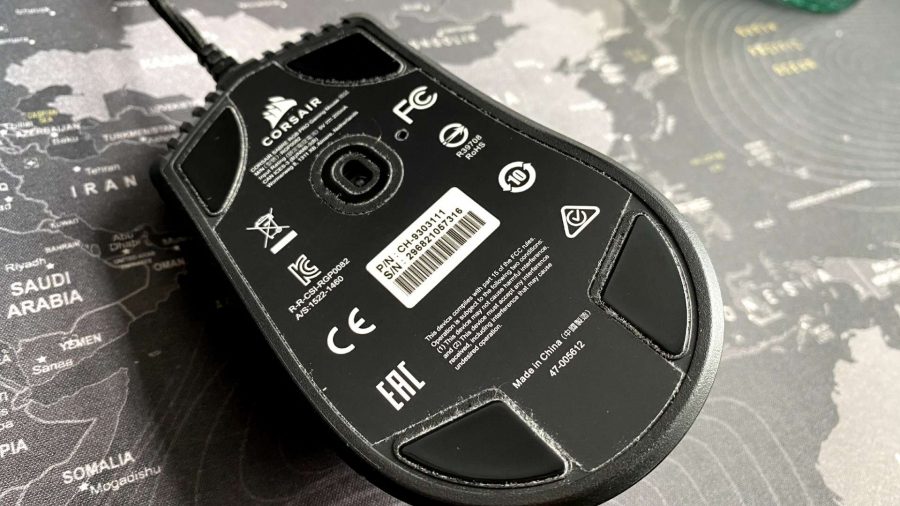 Even if the 8KHz polling rate is slightly gimmicky, the 18000dpi Pixart sensor is top-tier and feels great with the Sabre RGB Pro’s low weight and super-slippery PTFE feet, which glide effortlessly over your mouse pad. Ergonomically speaking, the mouse fits my usual palm grip perfectly, and those of you with claw grips should find it suits, too.

At $59.99 / £49.99, the Corsair Sabre RGB Pro is already fairly priced for a high-DPI mouse, even when you ignore its lightness and 8KHz polling rate. Sure, it’s not the most stylish mouse in the world, but if you’re swayed by the super fast polling rate alone, it’s significantly cheaper than Razer’s 8000Hz offering, which will set you back $79.99 / £79.99.

Corsair's Sabre RGB Pro may not look revolutionary on the surface, but it's the cheapest 8KHz mouse yet without skimping on its sensor. However, those high system requirements for hyper polling may put many gamers off.