Since Counter-Strike: Global Offensive’s release in 2012, it’s become one of the most popular esports in the world – let alone one of the most played FPS games – regularly pulling in audiences in the millions. On top of that, it’s expanded with its own battle royale mode and heaps of new maps, and it’s even gone free-to-play.

Since its release in 1999, Counter-Strike has always had a reputation for being hard to start playing. Anyone who plays it will have a story for you about how badly they got thrashed when they first started out, and countless new players have been scared off by CS’ steep learning curve over the last decade and a half.

While its core mechanics are relatively simple – simply point the gun towards your enemies and shoot – once you dip below the surface, Counter-Strike quickly proves to be a much deeper game than it first seems. With that in mind, we’ve gathered together some helpful tips, so if you’re one of those new players enticed by that ‘free Steam games‘ tag, read on to help you swat up on Valve’s famous FPS.

How to aim in CS:GO

One of the biggest hurdles even veteran FPS gamers face when approaching CS:GO is learning how to aim. Unlike most modern FPS titles like Apex Legends, Call of Duty, and Rainbow Six Siege, aiming down sights is not the standard in CS:GO. Hip-fire is pretty much the only way unless you’re using a sniper rifle like the AWP.

This, of course, means that hip-fire works differently, too. If you’re standing still, the first shot you fire will land exactly where your crosshair is placed, so if you’re struggling to land your shots then remember that you can always stand still and tap once to get a 100% clean shot.

Firing fully auto will change that dramatically, so even if your crosshair remains in the same spot, the bullets will move away from that dot, creating what’s known as a recoil or spray pattern. Test this out by firing at a wall and not trying to compensate for the recoil at all. Most standing recoil patterns will rise vertically and then go side to side the longer you’re firing. Learning these and how to counteract them with your mouse movement is one of the biggest skill gaps in the game.

The best way to land multiple shots is to learn the first, easy part of the recoil pattern and fire in bursts only – this is all vertical recoil, so it’s often a case of pulling down your mouse while shooting.

The lesson above applies to shooting while standing still. If you’re moving it doesn’t really matter how good your recoil control is, those shots are going to go so far off target you might as well not bother firing at all. Whenever you’re taking a fight in CS:GO, you’ll need to stop moving completely to actually land a hit. This places a lot of emphasis on timing your strafe movements between bursts. 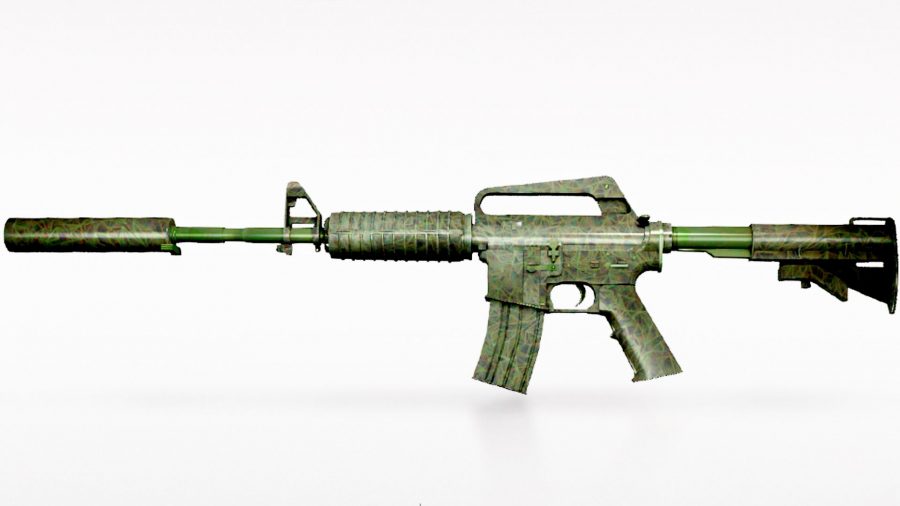 You can grind your way pretty far up the CS:GO ranks just by mastering the above, and while there’s no substitute for real game time and failure, there are some great ways to warm up before playing or hone your skills further.

The first is the community made Recoil Master – Spray Control map that you can download from the Steam Workshop. This is a very simple map that plonks you in a room with guns and a wall to shoot at – but the difference is that you’re shown the recoil pattern for every weapon you use as you fire it. This helps you build up some muscle memory for the guns you’ll be using.

The other great way to practice, which ties the recoil control and movement together, is in bot-only deathmatches.

There are pretty much four meta weapons in CS:GO. The starter pistol, the M4A1, AK-47, and AWP. Pistols are great for close-range fights as they don’t suffer from movement as much as the other guns, meaning you can buzz around the room reeling off rounds. The two assault rifles are highly valued as they’re both capable of dealing very high damage – not to mention one-shot headshots – even over long distances. The AWP doesn’t even need the headshot to secure a kill, so you can imagine why there’s no better weapon for locking down lines of sight. Take these out for a spin in your practice matches and get used to the recoil and movement all of them allow.

If you’re trying to bridge the gap between other shooters and CS:GO then the MP9 is a great SMG that you can use while moving, so bear that in mind. 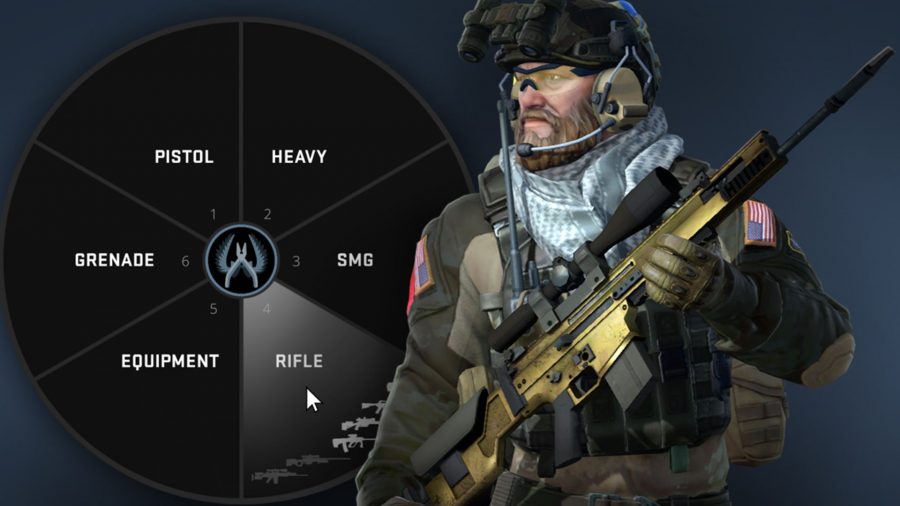 Getting to grips with the Buy menu

CS:GO is different from a lot of other first-person shooters because it has an in-match economy where your kills and successes earn you more cash. Between rounds you can use that cash to buy new guns, armor, and grenades. You access this menu with B, but there’s plenty of depth to the economy and what gear to buy when.

Different weapons reward different amounts of cash for securing a kill with them, encouraging a little risk if you opt for an SMG, pistol, or shotgun early on instead of an assault rifle. This is why you might see players tearing it up with a pistol for the first few rounds.You can return to the Buy area any time within the first 45 seconds of a round starting to restock ammo.

Armor is a great buy, too – it gives you a round or two worth of protection, which can make all the difference. Grenades are used a lot at high level play, but if you’re just starting out then you shouldn’t bother with them until you know the maps inside and out.

There’s several professional CS:GO players who regularly stream their practice matches on Twitch. You can learn a lot from just watching how they play, how they communicate with their team, etc. Not everyone does this, and some folks will argue that you’d be better off spending this time just playing the game more, but if you want to elevate your game then these are people to show you how. Here’s a handy list of CS:GO pros who stream – check a few out and find someone who you like watching.

A few times a year, there’s also major CS:GO tournaments, which are extra useful to watch as a new player, as the matches are generally commentated by people who are very familiar with the finer points of CS strategy.

Learn your smokes and flashes

Most CS:GO maps have a few really useful spots to drop a CS:GO smokes grenade or flashbang. Often, these spots will require you to bounce the grenade off a wall, or perform some other trick to place the detonation precisely where you want it. 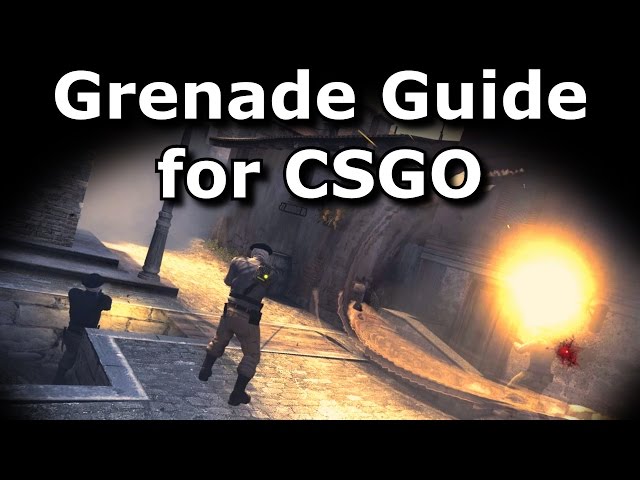 There’s a ton of videos that will show you these spots, and show exactly how to throw your smoke grenade to get it to land there. Here’s a video showing the important smoke and flash spots for de_dust2, CS:GO’s most popular map. A quick Youtube search will find you similar videos for all the competitive maps. Once you know some of these, start up an offline practice match and start throwing some grenades around.

Every spot of every competitive map will have names that the community uses to tell you over voice comms that an enemy is there. Usually, these are obtuse terms that won’t mean anything unless you know them already – things like “generator” or “jungle” or “catwalk”. It will take time to learn all the different callouts for all the different maps, but this information is crucial for communicating with your team.

Start here, and pick up the rest by listening to your team and asking for clarification when they call something unfamiliar.

Learn when and when not to reload

If you’ve got a decent number of bullets left in your magazine and think an enemy is close, don’t start reloading and get caught with your pants down. Reloading takes time, and you should only do it when you think you’re safe from enemy fire. If you run out of bullets in a firefight, switching to your pistol is going to be much quicker than trying to reload mid-fight.

Learn to be patient on CT side

One thing you will see time and time again in low-rank matches is impatient counter-terrorists. When playing as the CT side (assuming you’re playing a defusal map, which is the predominant competitive game mode), your job is to hold down the bomb sites and not let the terrorists plant the bomb. If you’re pushing up past the bomb sites and hunting around for terrorists, a smart terrorist team will simply wait you out and kill you when you push. Don’t do it. And learn how to punish people for doing it when you’re on the terrorist side.

Pay attention to your role in the team

Team composition is important. Make sure you’re looking around and seeing what your team is up to before you buy a gun. If someone has an AWP already, you generally don’t need a second one (there are exceptions to this, which you will learn, but play it safe). If a teammate has no money and you have enough for multiple guns, buy two and drop one for them. As mentioned above, if your team is broke, don’t buy out of sync with them – wait for them to save for a round and then buy with them. It’s a team game, play accordingly.

This one’s probably obvious to a lot of people, but CS can be a challenging and frustrating game when you’re losing. Getting frustrated is only going to make you play worse, so try and keep a level head. And if you can’t do that, at least don’t broadcast your frustration over voice comms. No one wants to hear about how bullshit their teammate thinks this game is in the middle of a round. And if you’re getting an earful from your teammates then just mute them – their toxicity isn’t worth any callouts they might make.

At this point, just doing the things above, you should be well on your way to being a decent CS player. You should be able to get into some low-level ranked matches and hold your own.