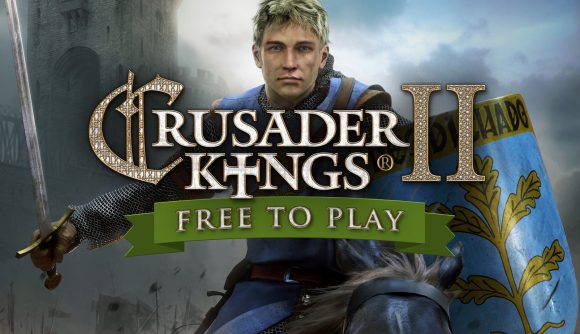 Crusader Kings 2 is probably Paradox’s most successful grand strategy title, though by now it’s had more than a couple of trips around the block. There’s a decent chance you’ve picked up the game through its numerous deep discounts and occasional full giveaways, but if not, you’re in luck – it’s now free-to-play.

While it seemed possible this was a promotion for the weekend of PDXCON 2019, the publisher has confirmed during the conference main show that this is a permanent change. There’s no end date mentioned in the Steam announcement, you can no longer purchase the game on the official site, and it’s now listed in the free-to-play genre on Steam.

It’s a terrific excuse to get into the grand strategy title, and its massive selection of DLC is also available as part of a wider Paradox sale. The possibility of free-to-play Paradox games has been toyed with in the past, and the company discussed the idea of a “hybrid model” last year – a free-to-play CK2 with loads of DLC to back it up could be the start of just such an experiment.

Henrik Fåhraeus, the director of Crusader Kings 2, made the reveal at PDXCON, saying the change will be “forever more”. The initial news had CK fans even more excited about the possibility of a Crusader Kings 3 getting announced this weekend at PDXCON, which is what happened.

You can read more about Crusader Kings 3 here. The sequel is set to arrive next year.

Crusader Kings 2 is easily among the best free PC games, and you can see for yourself why without spending a cent right now.