Crusader Kings 3 mods are flying as the game nears the one year mark since release. At the time of writing there’s several thousand mods available via Steam Workshop alone. Turns out people are not only keen to play Crusader Kings 3, they’re keen to mod it to high-hell and back again as well.

If you’re on the fence about buying it, we found it to be a great entry point into the complex world of grand strategy games, although make sure you read our Crusader Kings 3 review, just to be sure.

It’s still early into the life cycle of CK3, but it’s clear that the modding community is already in full flow. Some have already begun work on the ambitious project of making some of the popular mods from CK2 available in CK3. With all this buzz surrounding the mod scene, we figured we might as take a brief look at what’s already on offer and let you know what the most promising projects are right now. Expect this list to grow and change over time as the mod scene matures.

These are our picks for the best Crusader Kings 3 mods: 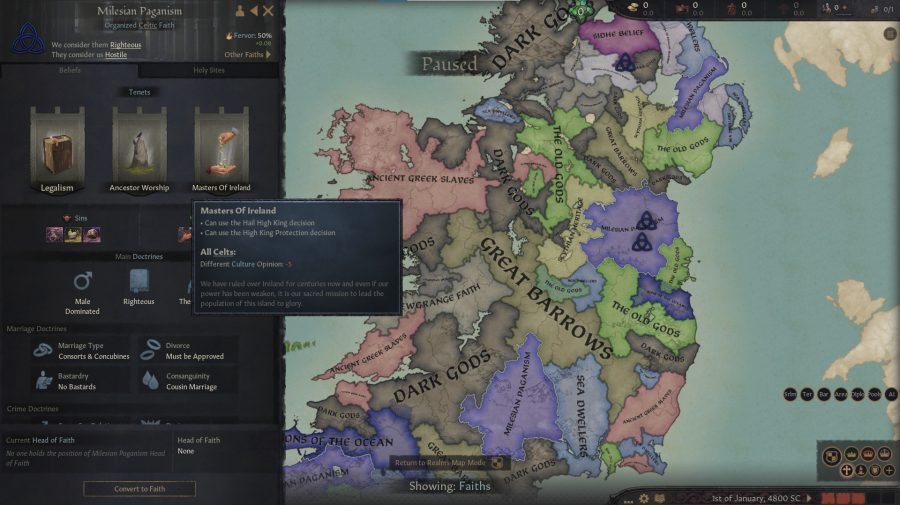 Tales of Ireland is a total conversion mod that focus solely on Ireland, giving it a level of depth and dedication not seen in any other historical strategy game. It features over 1000 counties distributed among 32 kingdoms at the game’s start, which is roughly 400 BC. It’s based on the ‘Book of Invasions’, and is steeped in Irish mythology. 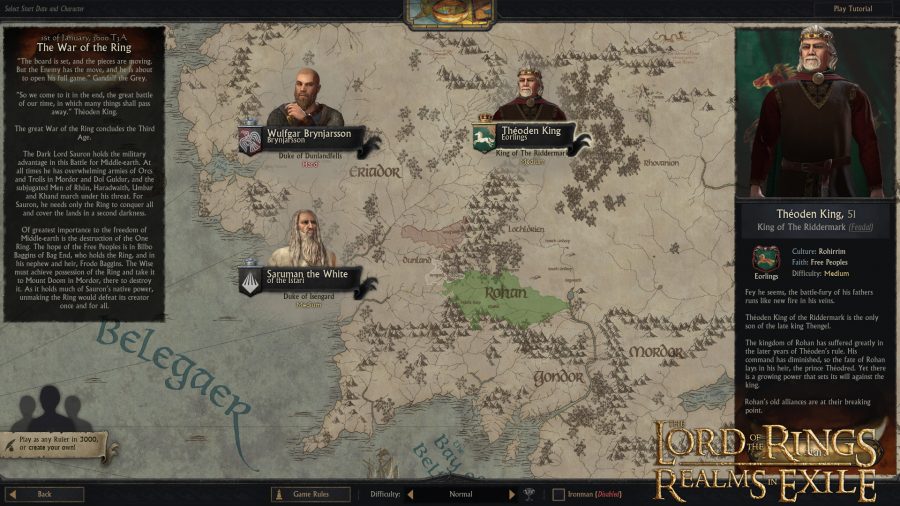 Lord of the Rings: Realms in Exile

This mod was only posted in mid-November, but it’s already risen to become one of the more popular mods on CK3’s Steam Workshop hub. As you may be able to guess, this mod is aimed at bringing the iconic ‘War of the Ring’ setting from J.R.R. Tolkien’s Lord of the Rings into Crusader Kings 3, fully converting it to the genre-defining fantasy world.

The initially release focuses on the Kingdom of Rohan, and their struggle against Saruman and bandits. You can play as King Théoden himself, Saruman the White, or Wulfgar Brynjarsson of Dunland. This latter choice is actually from the popular RTS game The Lord of the Rings: Battle for Middle-Earth, which we are big fans of. The team plan to expand to the rest of Middle-Earth as and when they can. 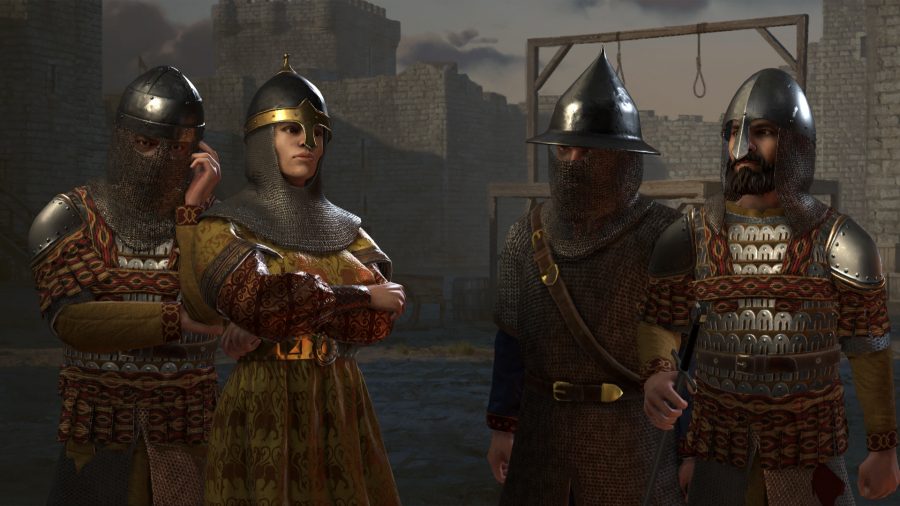 This is a newer mod that doesn’t seek to anything grand, but rather looks to improve the visual immersion of characters across the game’s many cultures and lifestyle. It adds countless portrait accessories for characters to wear, across all of the major cultural groups in the game; from circlets and crowns, to shields and helms. 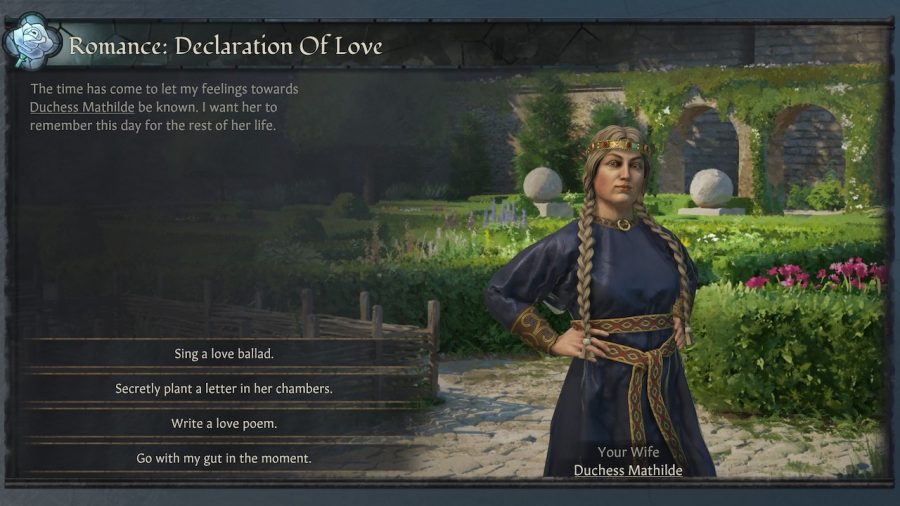 This is one of those smaller quality of life mods that, eventually, is likely just to be added into the main game, thus rendering the mod itself redundant. Still, if you’ve ever looked at an event and whished you could access more information regarding the people actually involved in the event, then Nameplates is for you.

Characters involved in the event show their names, relations and titles, although character tooltips are disabled from within the event window. Further more, this mod won’t let you earn achievements (like most mods for paradox games, to be honest) so just make sure you understand what the trade-off is. 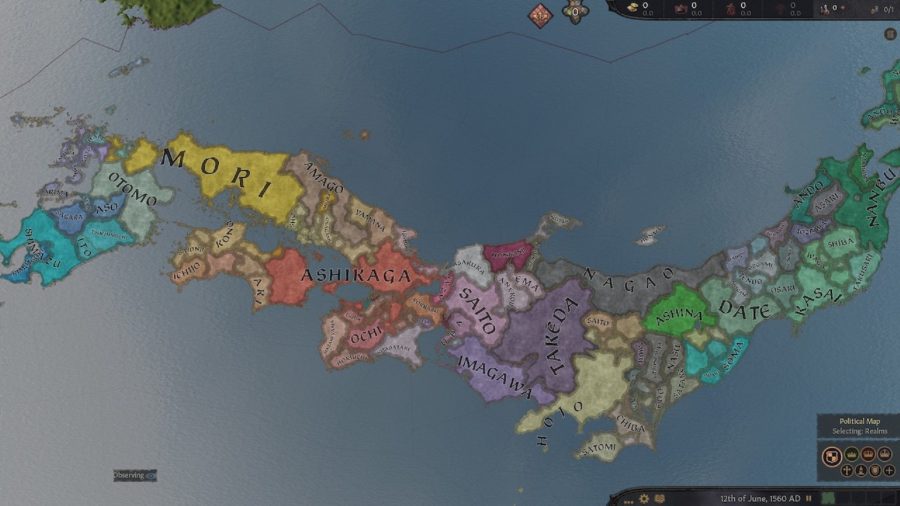 Once upon a time, Paradox released a game called Sengoku. It actually released the same year as Shogun 2: Total War and was based on the Crusader Kings 2 engine without actually being Crusader Kings 2 (CK2 wouldn’t release until the following year in 2012). It was ok, but it was also a bit limited and didn’t receive much more support after release.

This total conversion mod has nothing to do with Sengoku, but it IS based off a CK2 mod called Nova Monumenta Iaponiae Historica, and aims to bring Feudal Japan into the Crusader Kings III engine. It is very much in Alpha, currently, so engage at your own risk. There is no setting more suited to the Crusader Kings concept (other than A Game of Thrones) than Sengoku-era Japan, however, so this should be good once it’s finished. 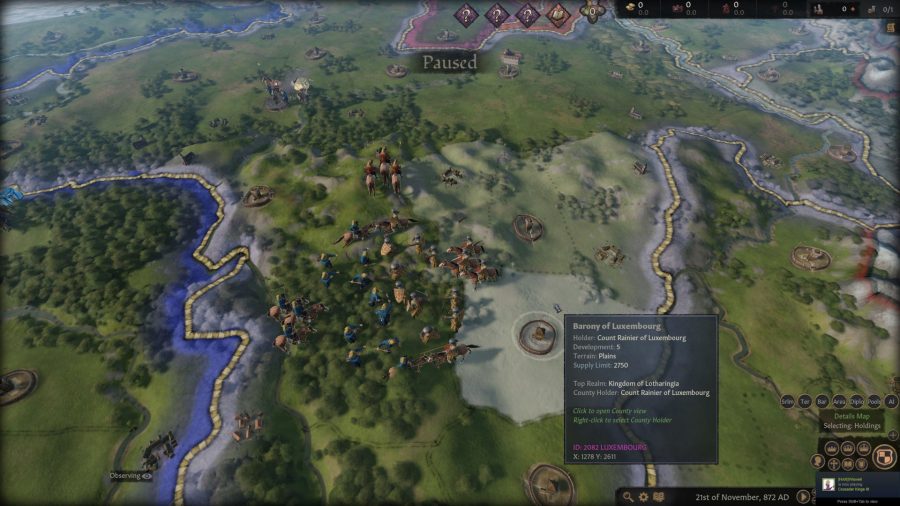 This is a fascinating mod that’s recently gained popularity. One thing Paradox grand strategy games are not are detail tactical battle experiences like what you’d find in Total War.

At best, you get two models (representing the army) fire off animations at each other, which is essentially the same in CK3 despite the graphical upgrade. Clicking on the duelling mini-knights will open up another screen which shows you how the battle is resolving in terms of numbers and stats.

It’s nothing to be ashamed about, but I’m sure many would appreciate something a bit more… which is where this mod comes in. P* Total Warfare essentially tries to expand the campaign map battle animations to make it look a bit more interesting. Instead of a duel between two knights, battles on the campaign map looking a bit more meaty with to groups of unit models duking it out.

Army models as well contain more than one unit, so everything just looks a bit more authentic. This isn’t the perfect mod and certainly the campaign map can get a bit busy if multiple battles occur in a small space, but it’s a nice touch and we hope the mod is developed further. 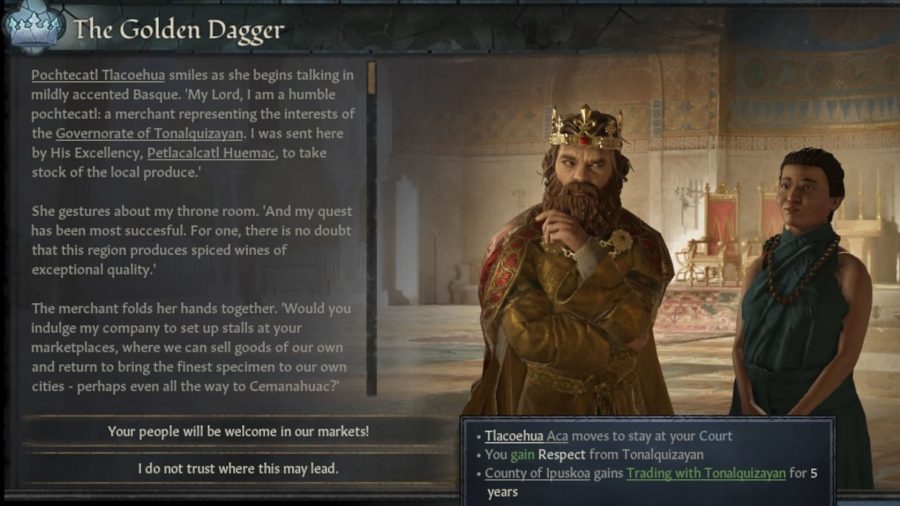 The original Sunset Invasion expansion for Crusader Kings 2 was one of the first to come out, and slightly controversial. It didn’t really add anything meaningful to the game, but it did add the possibility of a massive invasion of Europe by an Advanced Aztec or South American culture. It was perhaps an experiment in alt-history DLC that we have to assume wasn’t taken any further.

Clearly, somebody loved it though as it’s one of the most popular mods available right now. This version of Sunset Invasion goes a bit beyond what the original mod did, adding in new mechanics in dealing with your new Tonalquizayan overlords. The Golden Horse invasion seems a bit lack-lustre at the moment, so this might present a more challenging crises to overcome. 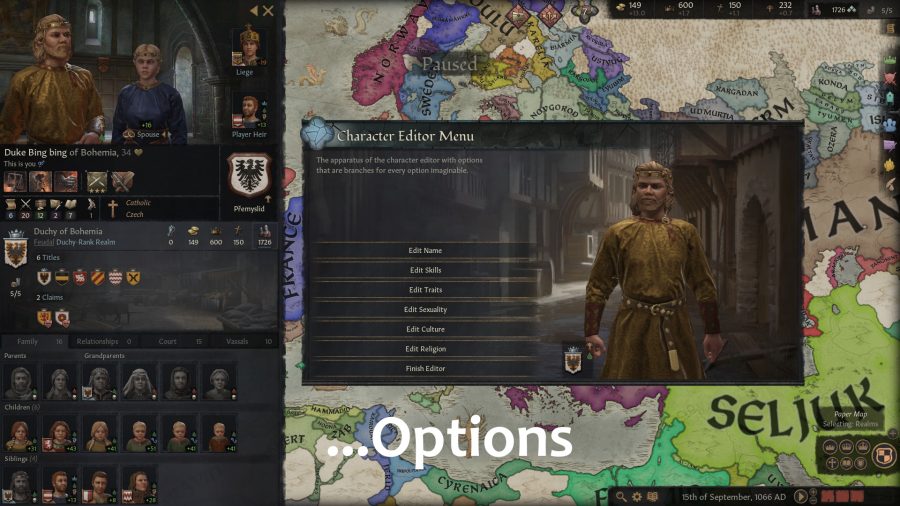 The great thing about games that are highly moddable like Crusader Kings is that a lot of customisation can be achieved via cheat commands. One infamous mod from CK2 – Sketchy Cheat Mod – has just made the jump over to CK3 for all of your dubious game interaction needs. Instead of navigating the decisions menu, the options for this mod are mainly accessed through the character interaction’s interface.

Via this menu, you can achieve almost anything, like turning all of your character’s stats up to 100, buffing your genes, adding character currencies (and actual currency), or tweaking your perk points for different lifestyles. The most recent update included the ability to change a character’s hair style, as well as claim any title you want. Future updates promise more cheats, so if you’re looking to truly mess around in the sandbox, the way has been opened. 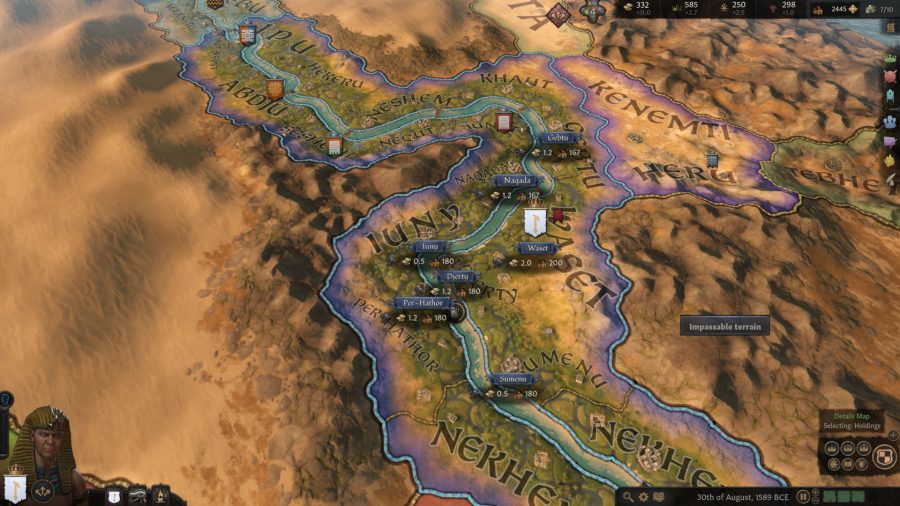 Of course, the first thing one should do when modding CK3 is just completely overhaul the game entirely and set it in a completely different period and setting. The Bronze Age: Maryannu is based on the Bronze Age mod from CK2, has already been ported to the new game in all its glory, featuring a new custom map that features the Eastern Mediterranean in great detail.

There are new features, too, such as religious tenets like Pharaohs, Oracles, and Sumerian mythology, with more to come. The mod creators do note, however, that some of these will need to be fleshed out in a future update. The buildings have been overhauled to fit the era with a focus on urbanisation. You can also expect to come across specific innovations that need to be encountered by your culture to be researched. That includes spoked wheels on chariots, composite bows, and writing.

Please note this currently only works in version 1.2. 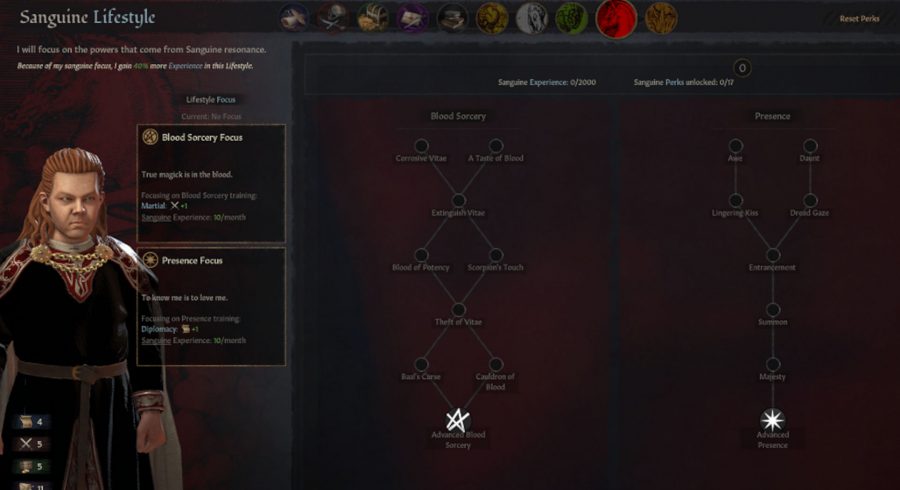 Another CK2 mod that’s made the transition, Princes of Darkness brings the World of Darkness universe into the middle ages where your character can be an immortal (but not invincible) vampire. This classes itself as an overhaul technically, and for sure many base game mechanics have been changed to account for your longevity.

Learning the standard lifestyle perks is far slower, for example, and you’ll never have any children so succession is a vastly different (And rare) event. There are new ‘disciplines’ you can spend time learning though to unlock more unholy powers.

If you’re looking for something that doubles down on the intrigue, this may be worth a try, but you can also check out our best Vampire games list for alternatives. 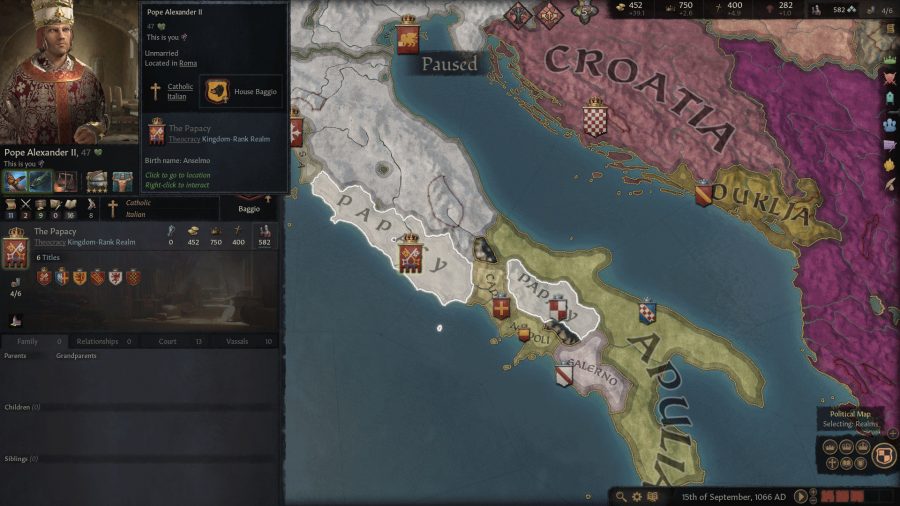 A recent trend in Paradox Games is to include additional ‘game rules’ – ways of customising your experience or giving you extra control on how things progress. Hearts of Iron 4, for example, has a whole host of options that allow you to ‘guide’ the AI and shape the game’s narrative progression. Towards the end, CK2 introduced concepts such as broken or shattered worlds that completely changed up the political and even geographical landscape to give you a fresh experience.

This mod seeks to introduce options like these back into CK3 until the devs decide to do it themselves officially. There are options around who will accept matrilineal marriages, limits on Vassals, custom faiths… it even recreates the ‘shattered world’ option where Kingdom or above level titles are deleted, leaving only Dukes (or heaven forbit, only Counts!). I’d be surprised if you’re getting bored of the vanilla game already, but in the even you do want to spice things up (or bring in some control to multiplayer) this mod should be part of your library.

More like this: The best medieval games on PC

If you’re interested in just the shattered realm option, there is another mod that focuses on just this functionality – Shattered World.