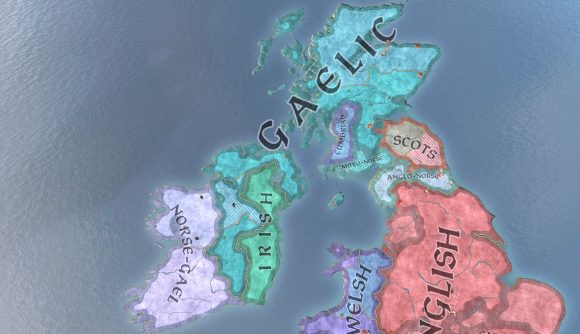 Medieval grand strategy game Crusader Kings III will be getting a major rework to its culture mechanics in the a free patch that will accompany the upcoming Royal Court expansion. While the new Crusader Kings III DLC pack will allow you to form new hybrid cultures, or split off from your starting culture, the update is overhauling how the mechanics work in a general sense.

This will bring the feature more in-line with other mechanics, such as religion, for consistency, but also to allow the developers to unite a bunch of disparate culture-related content under a single banner. As part of this, cultures will now be reformed to include five key pillars, two of which are ethos and cultural traditions. These two pillars have been teased out across various development diaries, but user Svarthert from the Crusader Kings subreddit has compiled an image that draws together all of the teasers released so far.

As of the most recent diary, all seven of the cultural ethos options have now been revealed, and we’ve also had teasers for 17 cultural traditions. Now fans can start brainstorming what combinations they’d like when trying to customise their new or hybrid cultures in-game.

Cultural traditions will also include culture-unique content that was previously less codified.

An example given in one of the earlier dev updates points to the Anglo-Saxon culture’s unique elective succession law, which previously had no real grounding. Now there’s a tradition that enables this special type of election option, which will be one of the Saxons’ starting set.

Some traditions will be unique to specific regions, or types of heritage, and some may be locked to specific existing cultures within the game. Generally, a culture can have no more than five traditions but this cap will increase over time. Cultures also don’t begin the game with the full amount, so players who manage to become the cultural head can influence what traditions get adopted over time.

At the time of writing, there is no known release date for the Crusader Kings III: Royal Court expansion, nor the free patch.