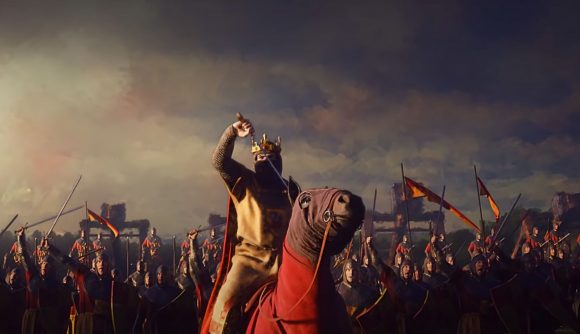 It doesn’t take long to find out that there are quite a few ways to die in Crusader Kings III, and that death – in whatever form it takes – will eventually come calling for everyone. One data-hungry player decided to compile the data on death in Paradox’s newest grand strategy game, and the results indicate that your ruler is most likely going to die of ‘natural causes’, and they probably won’t live far beyond the age of 60.

Redditor Imnimo has posted a graph detailing the ages and causes of death for every character in one 600-year playthrough of Crusader Kings III. Using a simple script, Imnimo was able to pull a good amount of data out of their save file, using a weighting system to assign a ’cause’ of death from among multiple health penalties if more than one were present.

That means, Imnimo explains, that a character who died having both the bubonic plague and depression traits is coded as having died from the plague, since that’s the more physically deadly condition. The categories of death include childbirth, imprisonment, genetic disorders, homicide, stress, injury, disease, war, and natural causes, and the chart breaks down how frequently each of these was the leading cause of death for all the game’s thousands of characters.

The chart is illuminating in several respects. You see a couple distinct spikes as character age increases: there’s an initial spike during early childhood, as infants are particularly vulnerable to disease in their first few years of life. Things seem generally pretty peaceful until about the age of 17, when deaths from war and injury suddenly become much more commonplace.

Life expectancy and cause of death in CK3 from CrusaderKings

Characters appear to be most likely to be murdered at the onset of adulthood, and the chances of dying during childbirth are the highest at age 18. Both these risk factors decline over time, replaced with an increasing chance of dying due to some congenital trait (such as gigantism) and a vastly increased risk of death from disease.

Once characters hit age 60, natural causes become almost certain to take them. It’s by far the largest spike on the graph, and accounts for 35.5% of character deaths in Imnimo’s playthrough. After natural causes, war, disease, and injury are the next most common killers, with every other cause of death accounting for less than 4% each.