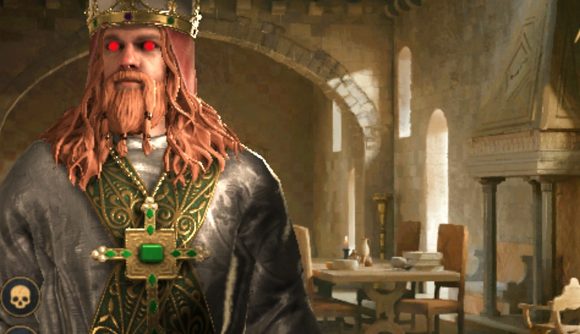 Crusader Kings III is an excellent grand strategy game, for the sole reason of the stories and characters it generates through purely organic means. It’s unique amongst Paradox’s strategy stable in that it focuses on people, not polities, and due to the built-in RNG you can come away from a session with some very quirky tales to tell.

Today’s edition of ‘stuff what happened in CK3’ involves a Reddit user who shared the fact that their game now has a giant, bad-ass looking Norwegian Pope who’s apparently sadistic, cynical, and possesses a prowess stat that’s higher than their learning stat – the latter being very important for a Pope, you would think.

I imagine a real Scandinavian Pope, even in the medieval period, probably wouldn’t look like they’d just stepped off a longship, but then we can’t know that because there has never been a Pope from Scandinavia. As far as I can tell, the region only got its first ever cardinal (the rank before Pope) in 2017 when Pope Francis appointed Lars Anders Arborelius, who is also the Bishop of Stockholm.

Meanwhile, the game’s just received a milestone patch in the form of 1.4 ‘Azure’, and the Crusader Kings III development team is working towards the Royal Court expansion and accompanying free patch, which among other things will involve a major rework to the culture system.

gigant Norwagian pope, who looks every inch a viking also happens to be cynical, sadistic and has a higher prowess than learning from CrusaderKings

While the base rework will be free, a premium feature coming via the new Crusader Kings III DLC will be the ability to hybridise two cultures together, as well as splitting off from your starting culture to form a new ‘divergent’ culture. You can read more details as to how these new mechanics work in this week’s dev diary.