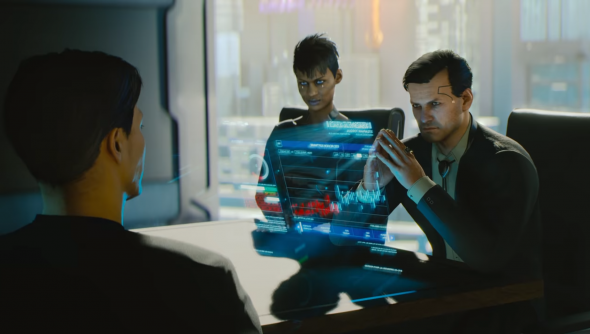 Cyberpunk 2077’s massive open world will have no loading screens. Despite the size and apparent complexity of the world that developer CD Projekt Red has created, you’ll be able to seamlessly transition from place to place.

That’s similar to how things worked in The Witcher 3. For the most part, Geralt could travel around the world seamlessly, with only a few small areas – Kaer Morhen, Vizima, and White Orchard – unavailable as part of the open world. Admittedly, you do have to load into areas like Skellige and Toussaint, but those are more like entirely new maps than areas of The Witcher’s open world.

It’s fair to say that Cyberpunk 2077 will probably make it onto our list of the best RPGs.

In The Witcher, however, indoor areas were often quite small, particularly inside its cities. There were shacks, houses, and tombs to explore elsewhere, of course, but the majority of the dwellings in places like Novigrad or Beauclair can’t be accessed in the game. Cyberpunk 2077, however, reportedly lets you go anywhere, with major tower blocks to explore from their street-level lobbies to their top-floor offices.

In Cyberpunk, both entering and traversing those buildings will be seamless, with no loading screens. According to CDPR associate design director Kyle Rowley, who was asked on the game’s official Discord channel (via Spiel Times) whether there will be loading screens from area to area (there are six regions in Cyberpunk 2077’s Night City map).

In response, Rowley said that there will be “no loading screens after the initial load into the game.” It’ll be interesting to see how CDPR has worked around rendering that open world – we’ve speculated that the game’s subway system might help, but it’s not clear how that would work alongside Cyberpunk’s fleet of available vehicles.

We don’t know the Cyberpunk 2077 release date yet, but hopefully CDPR will come good some time soon. You can check out the game’s E3 trailer above.