What vehicles are coming to Cyberpunk 2077? By now we’ve seen some of the vehicles we can drive in Cyberpunk 2077 and the manufacturers that make them, including the type of car and their parts from heavy trucks, to slick, smart

You’ll be able to store all the vehicles you own in your very own garage in Cyberpunk 2077 and you can call on your vehicle at any time, similar to how you would call on Roach in The Witcher 3. This will only apply to one vehicle, the rest will remain safely tucked away in the garage at your apartment in Cyberpunk 2077.

No, unfortunately you can’t drive the flying cars in Cyberpunk 2077, although there could potentially be a mission or cutscene where we take to the skies in one. They won’t however be a part of the convoy of vehicles you’re able to own or steal in Night City, along with boats and helicopters. Enough of what you won’t be able to drive though, here are the Cyberpunk 2077 vehicles we know of so far.

The cars in Cyberpunk 2077 all fall into different categories not only for the type of vehicle they are, but also how much they’ll set you back. Here are the vehicle categories and their confirmed cars. 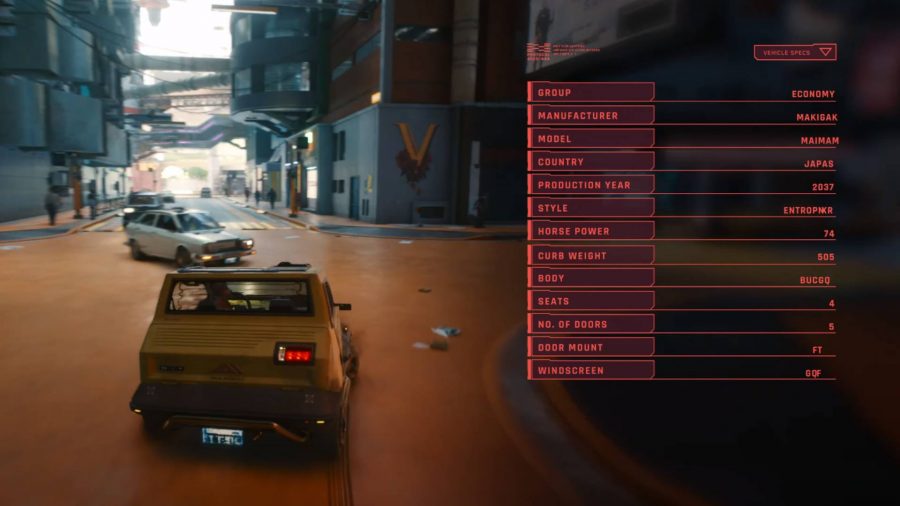 This group are all rundown, beatup-mobiles, that we can’t imagine will cost much to own. As well as these vehicles, we’ve also seen minivans and old police cars in this category.

Name: Maimam
Manufacturer: Makigak
A scrappy little two-seater that’ll fit into the tight side streets and even up and down stairs.

Name: Hella
Manufacturer: Archer
A battered, old four-door car that’ll get you from A to B without attracting too much attention. 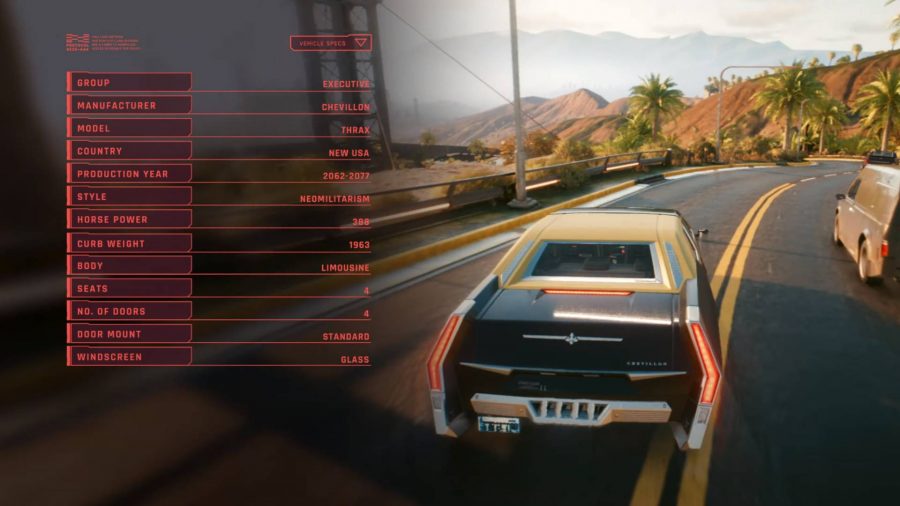 Smart and stylish cars with better equipped tech, these cars all look a lot slower but more refined than any of the sports cars we’ve seen so far.

Name: Cortes
Manufacturer: Villefort
A low, black or light yellow limousine with a large grill and a decent amount of speed. 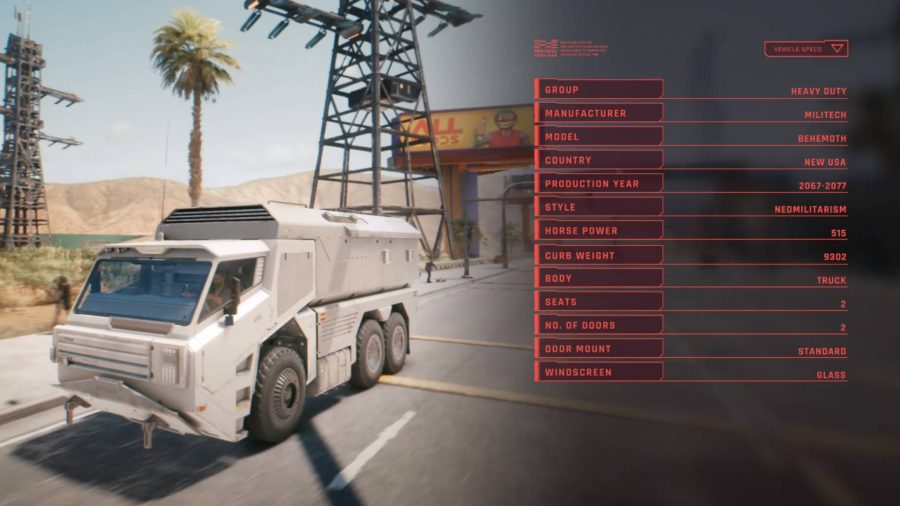 Name: Bratsk
Manufacturer: Kaukaz
A large container truck with a heavy front and a decent amount of power.

Name: Behemoth
Manufacturer: Militech
A neo-military and gargantuan truck, one of the more powerful cars in the heavy duty category.

Name: Chevalier armoured SUV
Manufacturer: Militech
This armoured SUV appears in a gameplay trailer for Cyberpunk 2077 and is owned by one of the militech agents. 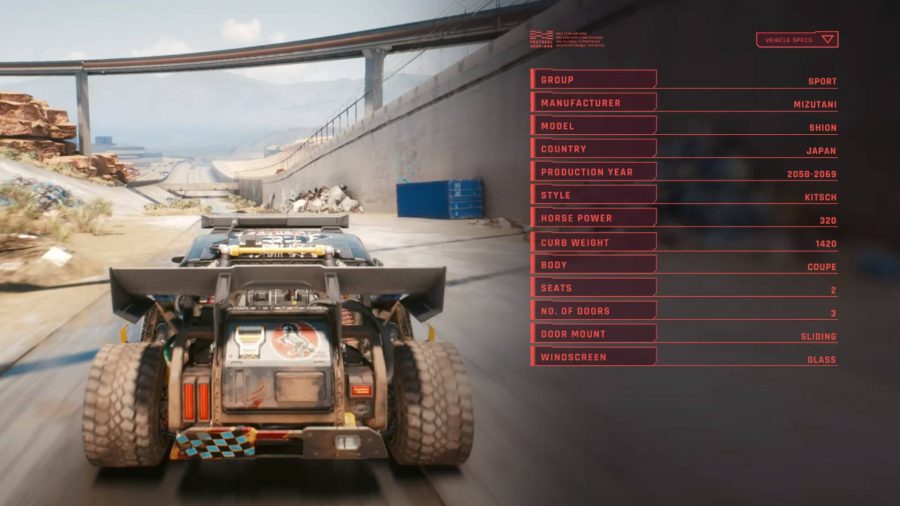 Colourful and stylish sports cars that can zip around Night City, built for speed, with changeable parts and powerful engines.

Name: Quadra V-Tech
Manufacturer: Quadra
This is the vehicle we see V using in most Cyberpunk 2077 key art. It appears to be modelled after an exotic sports car from the 1980s, like a Lamborghini Countach.

Name: 1970 AMC Javelin
Manufacturer: Quadra
We’ve seen glimpses of this yellow sports car in various gameplay and trailer reveals, it’s pretty stylish, and hopefully pretty fast. It’s not the only yellow vehicle we’ve seen though, as the Cadillac Fleetwood Brougham could potentially make its way into the game. 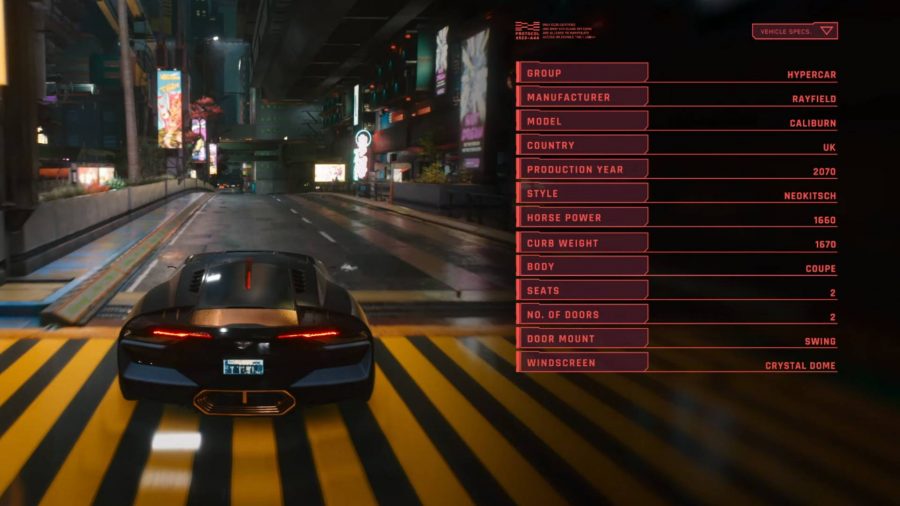 The flashiest and speediest group of cars in Cyberpunk 2077, Hypercars are built using expensive material and slick, precise body work.

Name: Aerondight
Manufacturer: Rayfield
One of the more expensive cars, it looks like an amalgamation of James Bond and Batman’s rides – we can imagine it will set you back a pretty penny.

Here are all the bikes we’ve seen in Cyberpunk 2077:

Name: Yaiba Kusanagi
Manufacturer: Yaiba
This fast and sporty bike is made by the Yaiba corporation and features in the E3 2019 gameplay demo.

If you want to look the part in your flash new car, check out our Cyberpunk 2077 character creation guide on all the garish neon outfits you can be sporting when the Cyberpunk 2077 release date rolls around.