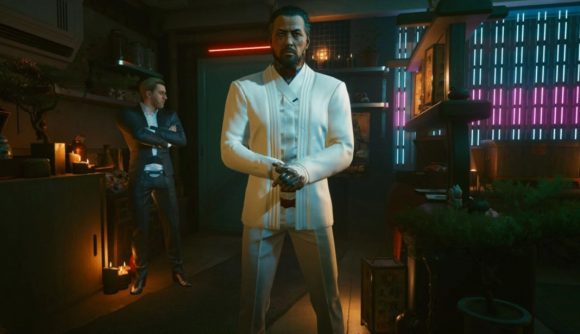 A massive update rolled out for Cyberpunk 2077 this week, but it’s causing some severe problems in the RPG game. Players are reporting a game-breaking bug has emerged in one of the missions the patch alters.

On the open-world game‘s subreddit, several players have posted about a glitch in ‘Down in the Street’, a mission that got tweaked in the update. Before the update, the issue was that sometimes Takemura wouldn’t call at the end, preventing any kind of progress. Now what happens is Takemura will call and… not say anything, just staring at you perpetually as you run around, trying desperately to find a way out of this digital cage you’ve been locked into.

No amount of saving or resetting seems to fix it, according to posters. One workaround is to call someone else before Takemura tries to get in touch, hang up on him while he’s on the other line, then do another side-quest, and wait a day in-game. Takemura should, emphasis on should, call and talk as normal, and all will be well. another option is to rollback to an earlier version, but that’s only available on certain platforms, like GOG.

Update 1.1 is Cyberpunk 2077’s first major patch, as part of developer CD Projekt Red’s plan to fix the cyberpunk game after its tumultuous launch. CD Projekt has said DLC is being delayed in order to address the most glaring issues, first and foremost.

New update broke a main story phone call with Takemura so now I cant continue the story. I’ve waited 5 minutes and nothing is changing from r/cyberpunkgame

A recent report on the development of Cyberpunk 2077 alleged poor management and crunch among the internal issues at the studio in the run-up to the game’s release.