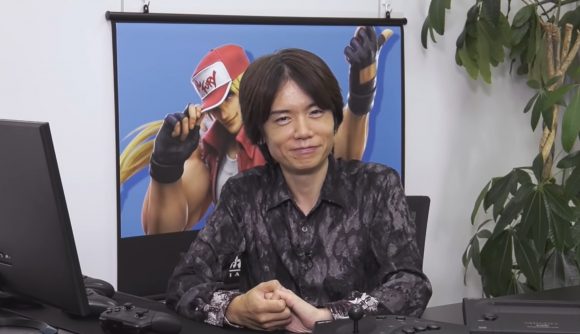 While we don’t often get to talk about him here on our PC-focused videogame site, Super Smash Bros (and Kirby) creator Masahiro Sakurai is one of the most notable figures in gaming fandom. It turns out that he has interests other than fighting games and keeping Waluigi out of Smash, too – he’s been playing Cyberpunk 2077, and was “deeply moved” by how developer CD Projekt Red handled refunds for the game.

“Dealing with refunds is something that makes even me feel deeply moved,” Sakurai says in a recent Famitsu column, as noted by Ryokutya2089 and translated by Siliconera. “This kind of sincerity was never heard of before.” Sakurai adds, “I support this game from the bottom of my heart for sincerely dealing with [the refunds].”

Cyberpunk 2077 launched in a messy state, especially on consoles. The buggy game was pulled from the PlayStation Store, and CD Projekt soon promised that players would get refunds, and the company ensured that would happen “out of our own pocket if necessary.” The launch has drawn an investigation from a Polish regulatory bureau.

Sakurai mentions his own work on Meteos, a puzzle game released in 2005 for the DS, in which accelerated development at the end of production became challenging. (Meteos is great, by the way. Go play Meteos if you haven’t.)

It seems Sakurai is a true multiplatform gamer. While he also played Cyberpunk on the PlayStation 4 Pro, “I played it on PC in the beginning. I encountered bugs multiple times.”