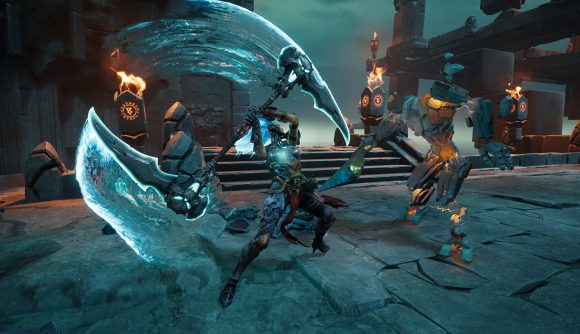 Darksiders 3: Keepers of the Void is the latest DLC expansion for THQ Nordic’s series revival, and it looks to be significantly more substantial than wave-based survival of the Crucible. Keepers of the Void is now available, and it will send Fury into a fresh quest in a new location which promises plenty of new rewards to earn.

Keepers of the Void puts on a mission from Vulgrim to end a threat residing in the distressingly-named Serpent Holes. “All new locations, puzzles, and enemies await the chance to test Fury’s abilities,” and the rewards will include new weapon forms for the Hollows and the highest-tier gear set from the previous two games: the Abyssal Armor.

One of the chief complaints players had about the previous Crucible DLC is that similar challenges were available in the previous games for free. Keepers of the Void seems to be a more substantial piece of content all around, but the fact that you’ve got to pay extra to get a chance at the Abyssal Armor might prove similarly chagrining.

Check out some of what to expect in the trailer above.

Darksiders 3 reviews mostly painted the title as a solid but unimpressive revival of a cult classic series. Hopefully it and Darksiders Genesis will open the door to something more substantial in the future. (Like maybe a resolution to that still-outstanding cliffhanger.)