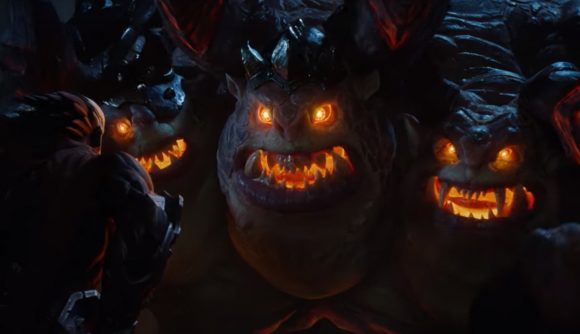 THQ Nordic has confirmed that it’s making a fourth Darksiders game. This one is a prequel called Darksiders Genesis, and features the return of War alongside the newly playable Strife as they hunt down a whole bunch of demon lords and ultimately save the human world from Lucifer’s destruction. As the pre-E3 leaks suggested, gameplay is taking a “fresh direction.”

Darksiders Genesis is Diablo-style action-RPG played from an isometric perspective. Strife predominantly wields guns (as Game Informer notes), and on a gamepad his attacks map to dual analog controls. He’s got special gun abilities that consume ammo, but that resource is easily replenished from enemies.

The game is in development at Airship Syndicate, a studio founded by many former staff members of Vigil Games – the company responsible for Darksiders 1 and 2. That means the return of artist Joe Madureira, who defined the comic book aesthetic of that original war between supernatural factions.

You can see more – including a brief glimpse of gameplay – in the trailer below. The end of the video has logos for both Steam and Stadia, so expect to be able to play the PC version on those platforms.

Darksiders 2 already flirted with a loot system, but this is the first time the series has fully abandoned its Zelda-style roots. There’ll be some puzzle-solving in these stages, though broadly it seems we’re going full Diablo.

This is the second of THQ Nordic’s planned pre-E3 reveals, following news of SpongeBob SquarePants: Battle for Bikini Bottom – Rehydrated. There’s one more set to be unveiled tomorrow, and rumours have suggested a new Destroy All Humans or a new Red Faction could be in the works. Either way, we’re getting plenty of info on upcoming titles ahead of E3.