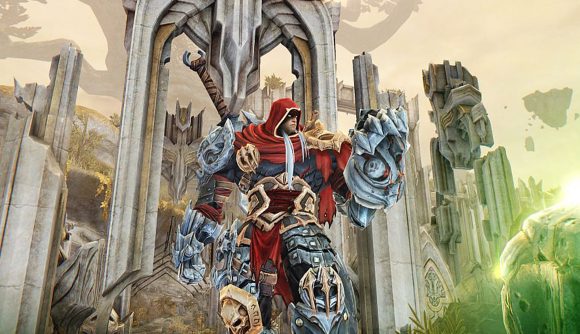 E3 is still over a week away, but that hasn’t stopped metaphorical truckload of new games from getting announced early. Now, it looks like a new Darksiders can be added to the list. The schedule for Geoff Keighley’s E3 Coliseum stream has outed the existence of the next game in the series, and we’ll find out much more soon.

The panel is called ‘Darksiders: Action Adventure Evolved,’ and it will take place at 10:30 PDT / 13:30 EDT / 18:30 BST. It “will coincide with the E3 2019 unveil of a brand new Darksiders game that takes the franchise in a fresh direction. This is a panel discussion about the art and business of creating and maintaining an action adventure franchise rich in-game and corporate lore.”

Some apparent leaks out of THQ Nordic last week suggested a new Darksiders and Destroy All Humans were on the way, and it’s looking increasingly likely that those reports will pan out. The Darksiders game is supposedly called Darksiders: Genesis, which is certainly the sort of title you’d give a “fresh direction” for a series.

The E3 Coliseum schedule has already outed some gameplay details including co-op for Square Enix’s Avengers game, and it may yet give us some further pre-E3 secrets.

As terrified as I am to find out what “corporate lore” means, I certainly want to know what’s next for the series. Darksiders 3 was a decent but unspectacular take, but since it just released last year it’s tough to imagine a major new sequel in the series already on the way.

Of course, the (unconfirmed) Genesis title could suggest a reboot or a prequel, and that means we may still never get the payoff to the terrific cliffhanger that closed Darksiders 1.