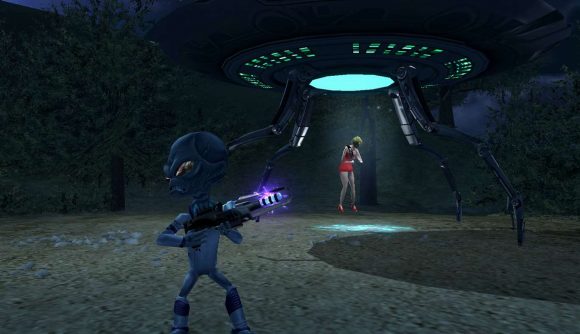 Word on the internet streets is that THQ Nordic plans on announcing new titles in the Darksiders and Destroy All Humans franchises at this year’s E3, based partially on public statements made by THQ Nordic and comments from the company’s ill-advised AMA on 8chan.

That lines up with an image posted by user THQN_Reinhard during the company’s 8chan AMA, which listed Destroy All Humans and a game called Darksiders: Genesis as titles featuring into its E3 plans for this year. As Eurogamer notes, Twitter user @Afro_Gear posted a screengrab of the post.

Both franchises fit the bill for either slot, although I wager “galactically beloved” is most likely a reference to Destroy All Humans’ alien invasion theme.

The Destroy All Humans license went up for auction after the original THQ went declared bankruptcy in December 2012. The series ran for four games, the last being Path of the Furon, which launched back in 2008 and took the series into the 1970s.

Darksiders, on the other hand, just saw a new entry late last year with Darksiders III, so it’s a bit of a surprise to hear rumors of a new game so soon. The name, Darksiders: Genesis, suggests a prequel or reboot, although given the quasi-biblical nature of the series’ lore, it really could mean just about anything.

Get hype: The most exciting upcoming PC games

Whatever the case, we’ll find out more about THQ Nordic’s plans during E3, which runs June 11-13. Personally, I’m excited about the notion of a new Destroy All Humans title made for modern hardware – running around wreaking havoc as a Roswell escapee is just good, clean fun.