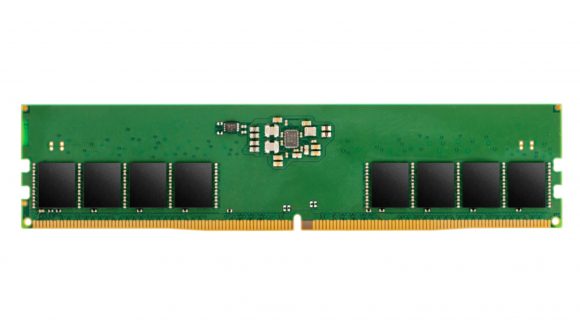 While you won’t see the fifth generation of memory modules inside the best gaming PC until Intel releases Alder Lake and AMD debuts its Zen 4 platforms, manufacturers Jiahe Jinwei and Netac just revealed the first batch of their DDR5 sticks fresh from the factory one month after the former confirmed the arrival of Micron DRAM modules at its facilities.

Both are 16GB sticks running at a frequency of 4800MHz, which isn’t quite the 10000MHz Netac is aiming for, with timings of 40-40-40 and a voltage of 1.1V. 4800MHz is the base frequency for DDR5, but there’s a lot of potential when overclocking the latest generation since it doesn’t consume as much power. After all, DDR4 already hit 7156MHz with a bit of tinkering.

Netac is currently testing its DDR5 module for compatibility with manufacturers of the best gaming motherboards such as Asus and MSI. According Mydriver’s report, progress is “smooth” and the RAM is successfully running on an unnamed operating system, which bodes well for the memory being ready just in time for Alder Lake later this year.

It’s slightly sleeker with a black PCB design in the photographs, compared to Jiahe Jinwei’s standard green. But without heatsinks, both don’t look quite as attractive as some of the current options in our best gaming RAM guide, even if they might blow DDR4 out the water when it comes to performance.

Earlier benchmarks suggest DDR5 could be up to 28% faster than DDR4, as well as bringing stability improvements and less power consumption. While you may not necessarily notice the difference while playing the best PC games, all these little improvements add up over time.