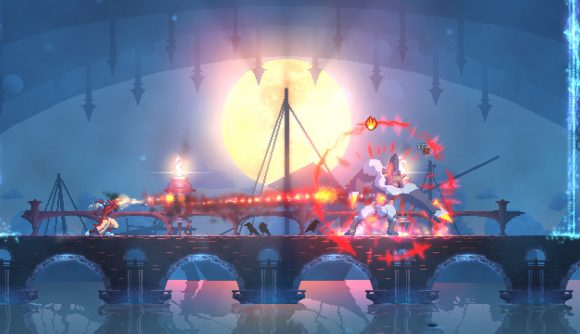 Dead Cells has crossed another milestone in sales, and developer Motion Twin is celebrating in appropriate style. As the roguelike has now shifted three million copies, the celebratory ‘Update of Plenty’ brings a range of other tweaks and adjustments to the indie game.

Motion Twin rolled out the rejig this week, tweeting out the patch notes (ta, RPS) with the reveal that Dead Cells has been bought over three million times. Right at the top of the pile are the crossbow changes – all crossbows are now two-handed, have two separate attacks, and are Survival only. Each variety of crossbow, then, has a set of individual changes, like the hook on the Heavy Crossbow not piercing enemies any more, and the Explosive Crossbow’s offhand now being a melee combo “with a surprise”. A special backpack was added for runs with two-handed weapons to hold a second, one-handed weapon that will replace the unused weapon slot.

The economy received an overhaul, removing gold scaling with prices moving up with item levels, and the shop is categorized by states instead of equipment. Shop rerolls are free too, but everything will be a bit more expensive if you take advantage.

Damage adjustments include shocked and poison damage affecting you in slightly different ways, and the overall difficulty has been smoothed out so spikes are less frequent.

We’re very happy to announce our 19th major update to Dead Cells, the Update of Plenty out now on PC. Oh and we’ve also gone past 3M copies sold of the game, which is surreal… Hope you like the changes: https://t.co/DrbD4RACp5 #gamedev #gaming #indiegame #Steam

Dead Cells had sold a million copies by early last year, so having now tripled that in just over a year, we can likely expect plenty more updates for the action-adventure game in the future, and maybe something Hollow Knight-themed, too.