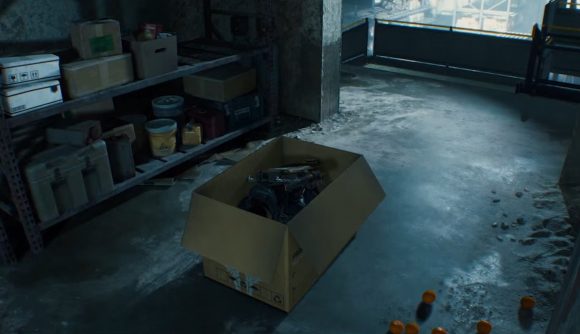 Death Stranding is getting an expansion of sorts, it turns out. Creator Hideo Kojima was on hand for today’s Summer Game Fest show to reveal the Death Stranding Director’s Cut, which will apparently be adding new content to the strange open-world game.

In the footage shown during the show, hero Sam Porter Bridges appears in an underground facility of some sort – a bunker, it seems, of the kind that he spends most of the game visiting but never going inside. There’s a mineral growth clinging to the ceilings and walls, and armed guards patrol a large open bay. Sam notices a large cardboard box full of oranges, and an idea occurs to him. He dumps out the oranges, and after another few moments’ thought, he hops inside like a little cat.

Here are some screenshots, courtesy of Shinobi602:

This story is still developing and will be updated soon, as PCGamesN works to bring you the fastest, but also the most thorough, coverage of the live Summer Game Fest live extravaganza. If you’re reading this, the show is either still live or has only recently concluded, so please check back soon for further updates, information, and analysis.

Welcome to PCGamesN – your one-stop-shop for the best, fastest, and most thorough PC gaming news coverage for this year’s E3 and E3-style events. We have staff in the UK and US who are working hard to bring you the best reporting on the internet on the biggest and most exciting announcements in this continuing summer of games.

Do check around the site for more from the show, including our news feed for all the highlights and big stories you’ll want to know about. You can also follow us on Twitter (@PCGamesN) for an up-to-the-minute feed of all the latest announcements from the event. We’ll be tweeting each story as it breaks.