We are cursed, it seems, to revisit the question of whether games can be art every couple of years. An opinion column published recently by Bloomberg warns that videogames are “eroding mass culture” because, the author claims, they are closed, self-contained worlds that are not in conversation with broader culture. By either happy coincidence or providence, we are now blessed with Deathloop, a game that could – all on its own – break us out of this endless recursive cycle.

Deathloop  – which you can buy here, coincidentally – is a stealth action game that draws from Arkane Studios' heavy-hitting Dishonored series, while also cleverly weaving in ideas from across the modern gaming landscape. It's brought to life with a sense of style and presentation that explicitly references the visual language of the Bauhaus movement and Dadaism, and a soundtrack pulled straight from the funky film scores of '70s action movies. It's without a doubt among the best PC games of the past several years.

In Deathloop, you awake on a windswept beach as Colt Vahn, a man with no memory of who he is or why he's found himself on a remote island in the chilly north Atlantic. His only recollection is of being brutally murdered by a woman named Julianna, and he staggers up from the beach to start putting the pieces back together.

Over the opening few hours of Deathloop, Colt learns that the island he’s on, Blackreef, is caught in a mysterious time anomaly, causing the day’s events to repeat in exactly the same way. Everyone on Blackreef has either been invited or paid handsomely to experience eternal life in a party that never ends, set against the rocky cliffs and stone buildings of the beautifully realised island. Anyone who dies during the course of the day simply wakes up again the following morning good as new. 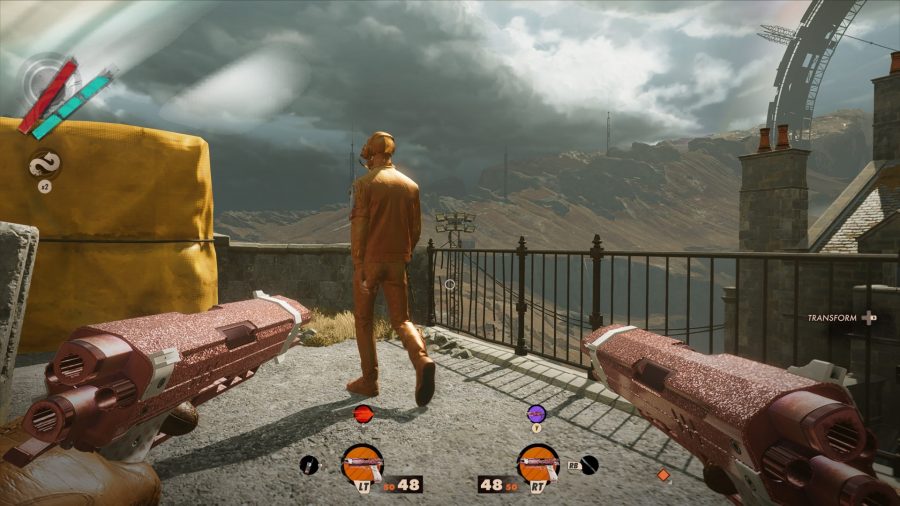 The big joke, of course, is that this is exactly how videogames always work. Death is made effectively meaningless, because you can just start the level over or reload a save. Knowing this, the ‘Eternalists’ who have come to Blackreef for the world’s biggest party have gotten pretty blasé about wanton murder and destruction – this is all a videogame, so it’s no big deal, right?

For Colt, however, it is a big deal. He’s determined to break the loop and escape the hedonistic Groundhog Day in which he’s found himself, and Julianna is determined to stop him. To succeed, he’ll need to work out how to kill seven ‘Visionaries’ on the island, who each hold a key to keeping the loop alive. If any of them make it to the end of a day, the loop resets and it’s back to square one.

Deathloop shows a deft mastery of multiple modes of play

Blackreef is divided into four big open areas, and each day is split into morning, noon, afternoon, and evening. During each phase of the day, you’ll pick a location to visit, following clues that reveal more about the Visionaries, tools you can gather to help take them down, and documents and recordings that shed light on the history of the strange island. Each Visionary holds a special artifact called a ‘slab’ that grants a particular paranormal ability, which will be familiar to anyone who has played the Dishonored series. 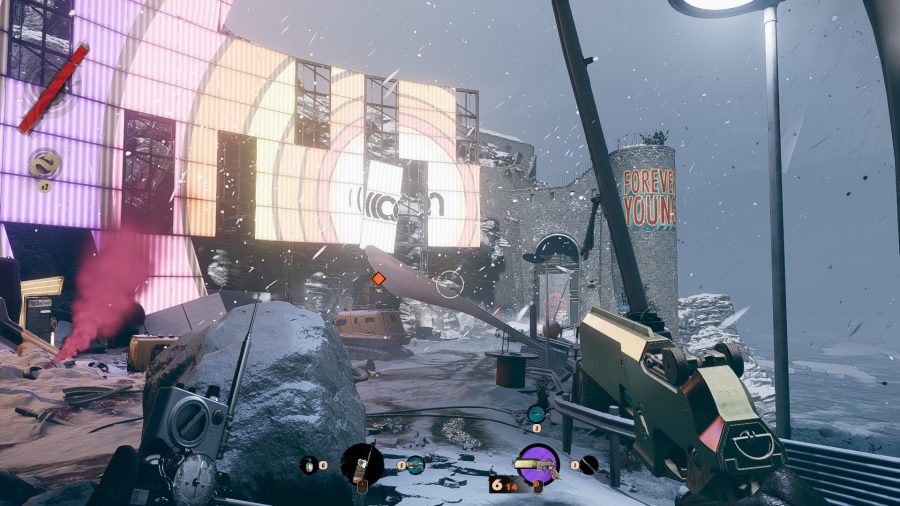 Shift, for instance, works just like Corvo’s Blink, while Emily’s Domino power finds its equivalent in Nexus, which links enemies together such that whatever happens to one happens to everyone in the chain. Karnesis is a bit like Wind Blast – a powerful blast of force that lets you push enemies around and combines brilliantly with Nexus. Picking up duplicate slabs allows you to unlock powerful modifiers, so you’ll be hunting each Visionary multiple times as you unravel Deathloop’s central mystery. 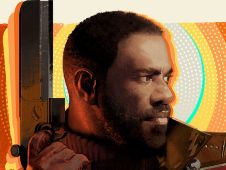 But of course, everything resets at the close of each day on Blackreef, and that includes Colt’s arsenal of slabs and weapons. Fortunately, there’s a loophole: by gathering a glimmering substance called Residuum, Colt can ‘infuse’ his gear and upgrades so he wakes up with them in the next loop. Any Residuum Colt hasn’t spent is lost at the end of the day, and he’ll drop any he’s carrying if he’s killed.

In the first of two big ideas borrowed from Dark Souls, Deathloop gives Colt the opportunity to recollect this currency after dying. You can ‘die’ twice, in fact, using the ‘Reverse’ slab – an all-new power for Deathloop – to rewind your position as if you’d misjudged a turn in Forza Horizon. If you’re killed a third time, that’s it; you’re sent back to wake up on the beach with a pounding headache. 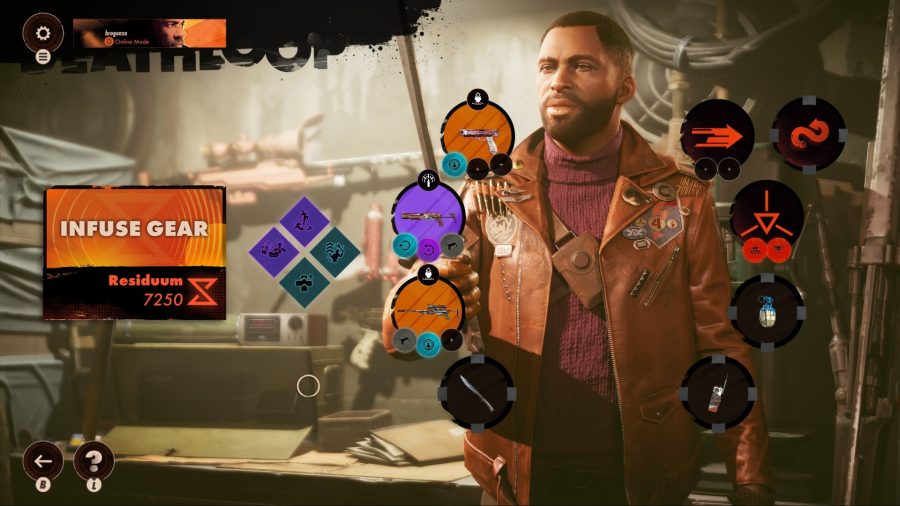 Because it represents progress you can realistically lose, Residuum adds a necessary tension to your expeditions across Blackreef. It’s enhanced further by the second big Dark Souls idea: players can take on the role of Julianna and ‘invade’ Colt players’ timelines to hunt them down and waylay their plans to break the loop. Julianna, who is unstuck from time for reasons that aren’t immediately made clear, will show up occasionally even if you disable player invasions, but opening my game to other players made these events far more exciting.

When he’s invaded, Colt has two options. He can try to get the drop on Julianna and take her out first, or he can head toward a marked location on the map, where he can use one of his gadgets to hack an antenna array to reopen the exits and try to make his escape. Playing as Julianna is a blast, challenging you to use your knowledge of each level to predict where Colt will try to hide. She has her own objectives to pursue as well – there are many performance goals that grant points for completing them in each mission, and levelling up will unlock new gear for Julianna and outfits for Colt.

With an RTX 2070 Super and a Ryzen 9 3900x with 32GB RAM, I had a largely stable experience with Deathloop, although it's resource-intensive enough that I had to play most of it at 1080p to maintain a stable framerate. Throughout my 30-hour playthrough, I suffered no crashes except in one specific situation that didn't prevent me from progressing, while another reviewer reported crashes in the loadout menu.

As Colt, the knowledge that Julianna could show up at any time sharpened my senses during each expedition. As I gained familiarity with each area, I eventually found myself tearing through the small gangs of Eternalist partygoers that guard key points, but the threat of invasion adds a tangible sense of excitement and dread. It’s similar to the vulnerability you feel in Escape from Tarkov or Hunt: Showdown, although here it’s far more approachable and delightful. There’s a powerful incentive to stand and fight rather than flee when Julianna invades, because she’ll drop whatever slabs she’s using, providing another potential source of new abilities and upgrades. 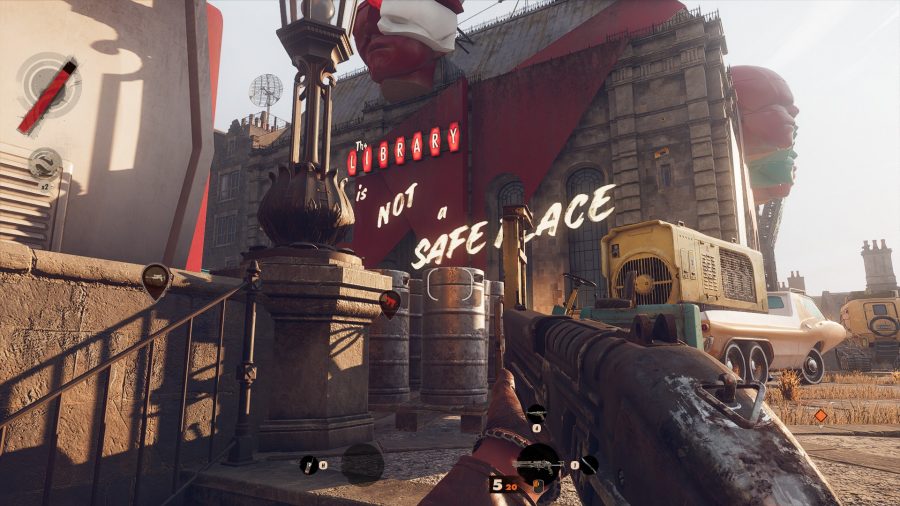 Deathloop’s guns all feel tremendous. There are only a few different models, but you’ll discover rarer versions of each that add new perks, mod sockets, and handling bonuses. They all feel great to fire, particularly on the Xbox One controller I used for most of my playthrough. As a rule, I play first-person shooters with a keyboard and mouse, as God intended. However, Deathloop was clearly designed for gamepads, and I’m glad I opted to play that way – the use of haptic feedback is lovely, even if I missed out on the specialised features developed for the new PlayStation DualSense controller. Fortunately, keyboard and mouse controls are as fully rebindable as you’d expect in 2021, so if you don’t get along with some of the stranger default settings, you can make any necessary adjustments.

There's a powerful incentive to stand and fight when Julianna invades

Every square inch of Deathloop is a visual feast. In the seaside town of Updaam, avant-garde artists among the Eternalists have splashed vibrant colors in angular shapes across old stone façades. Down in Karl’s Bay, there’s a more carnival-style application of the group’s ersatz Modernism, with mixed media exhibits of cathode ray tube TV sets set up over the narrow, winding streets. Each of the four areas changes considerably over the course of the day, too: a snowstorm rolls in during the afternoon, and the Eternalists’ increasingly chaotic pre-show drunkenness leads to several major calamities. There are layers and layers to uncover in each area, and the Eternalists’ artistic experimentation and freewheeling debauchery rests like an alien crust on their surface.

The levels all twist around themselves in surprising and delightful ways, and even after watching the credits roll, there are places I still want to explore in each one. You’re free to pursue any objective you choose every time you head out, and the way your leads criss-cross and overlap each other creates new opportunities for exploration and improvisation, and all but a scant handful of your goals have multiple avenues of approach to experiment with. 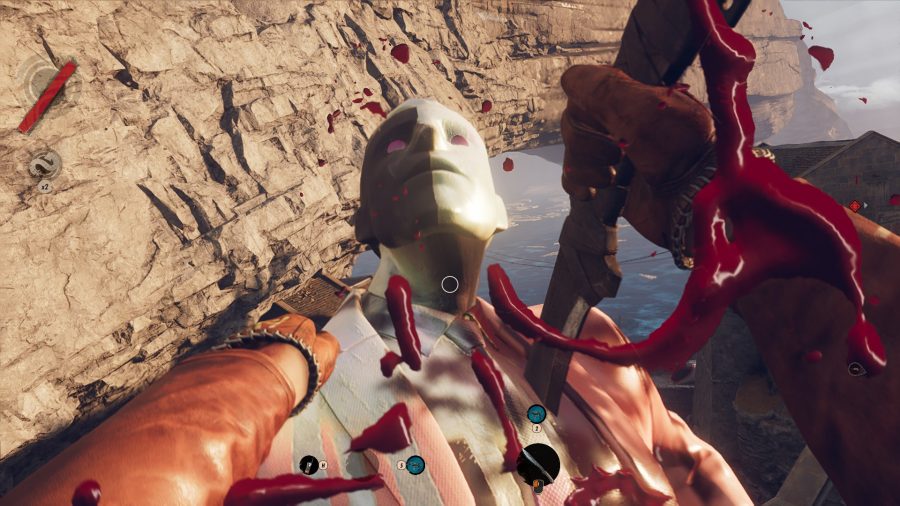 Deathloop is an audacious game. It uses Dishonored 2 as a starting point to chart a new course for the future of big-budget single-player FPS design, incorporating lessons learned from battle royale games. For most studios, it’s becoming increasingly unsustainable to create single-player shooter campaigns composed of high-fidelity levels that players will only see a handful of times. It’s a quandary that explains why battle royales are so tempting to devs: games like PUBG, Fortnite, and Call of Duty: Warzone succeed in using one large virtual space over and over, delivering unique and memorable experiences each time.

Can that be translated to single-player shooters? Deathloop director Dinga Bakaba applied this idea in its embryonic form to his last game, the somewhat middling Wolfenstein: Youngblood, which suffered from some clunky co-op mechanics but brilliantly re-used its maps to create an interconnected city under occupation. Now, he’s managed to elevate Youngblood’s best idea to its full potential.

Every square inch of Deathloop is a visual feast

But it’s everything else that Deathloop also gets so right that really cements as one of this year’s best games. It’s a tremendous demonstration of skill on the part of Arkane, which in Deathloop shows a deft mastery of multiple modes of play – action, stealth, puzzles, exploration, and narrative – that it’s able to seamlessly and playfully blend together without ever losing its light touch or sense of joy. Every time I emerged from the tunnels, I looked forward to discovering some new clue that would help me in my quest to break the loop, test out some new exotic weapon I’d just infused, or maybe get the chance to go toe-to-toe with Julianna. 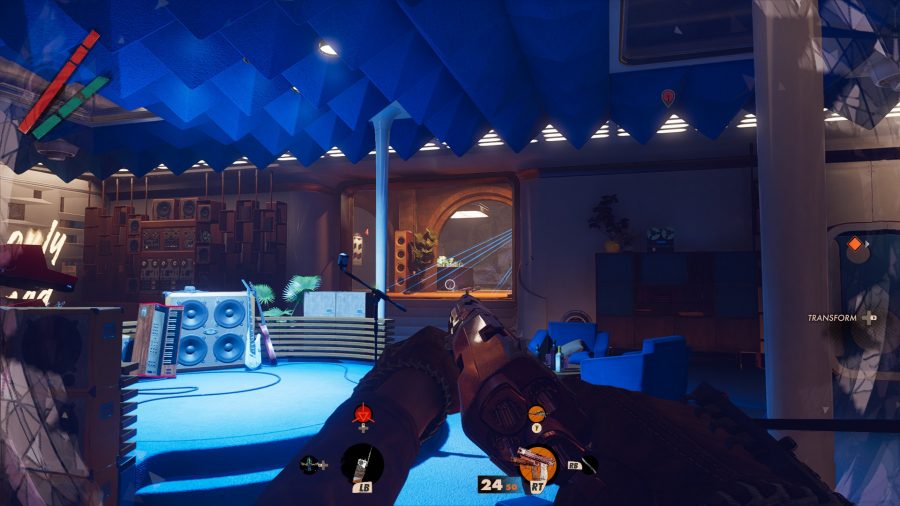 Deathloop is also confident enough to ask some fundamental questions about the role games play in our lives. It’s not always subtle, either: in the library in Updaam, all the books have been stuffed into storage rooms to make room for arcade cabinets and a massive cache of firearms and ammo. In the ultimate escapist fantasy world, is there room for growth and change? Can anything you do ever have any real meaning if every tomorrow is going to be exactly the same as today?

It’s a testament to how successful Deathloop is that it can confidently answer ‘yes’ to these questions. Should we be fortunate enough to reach a point at which 2021 is a distant memory, Deathloop will be the game we’re still talking about.

A true tour de force from Arkane that is bound to be one of the year's best and most important games.