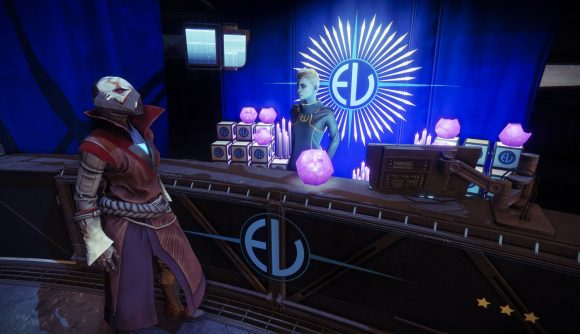 If you’re a regular Destiny 2 player, you know that eye-twitch feeling you get from seeing a blinking icon on your map: it means go here and talk to someone because they have something quest-related for you to do. But since the Dawning event launched in December, the icon for Destiny 2’s Eververse store – the one-stop shop for microtransactions – has been flashing constantly, making it look as though Tess has something for you, even when she doesn’t.

This would be annoying in any game, but it’s particularly so in Destiny 2, which over the course of hundreds of hours trains players to develop a Pavlovian response to these map icons. Tess often offers free goodie bags with last season’s emotes, shaders, and other fluff in them too, so the flashing icon is a signal to scurry over to her shop in the Tower to get your free treats.

The impression is that Destiny 2 is constantly, albeit subtly, nagging you to look at the cash shop. Fortunately, Bungie will be addressing this issue in a hotfix it plans to roll out pretty soon.

Over on the Destiny subreddit, Bungie community manager ‘dmg04’ responded to a thread asking the developers to “for the love of God” remove the flashing icon now that the holiday season is over.

“Now that we’re getting back from holiday, we’ll be planning a quick hotfix (potentially for next week), which will address the issue,” dmg04 wrote. “Stay tuned for the TWAB [This Week At Bungie].”

The community manager added that the ongoing bug with the obelisk in the EDZ, which prevents some players from interacting with it under certain circumstances, will be discussed in the next TWAB as well.

This Week at Bungie posts usually go up every Friday on the official Bungie blog, but they’ve been on hiatus since December 20. We’ll learn more when the first one of the new year goes up at the end of the week.