Typically, you have to grind for hours to get a handful of spectral pages, but thankfully there are a few ways to efficiently farm them, no matter if you’re on your own or with a Fireteam of like-minded players. However, some methods are now better than others, and there have been substantial changes since this year’s Festival of the Lost update went live.

You can only hold a maximum of 75 spectral pages at any time. That said, each method can be repeated and only takes a few minutes to complete. Here’s how to farm Destiny 2 spectral pages as quickly as possible. After farming enough spectral pages, run through the new Destiny 2 Haunted Lost Sectors, and you can convert the spectral pages into manifested pages by defeating Headless Ones.

A change has been deployed to limit Spectral Pages and Candy rewards in Wrathborn Hunts, Expunge missions, and the Lake of Shadows Nightfall. The Nightfall change will be reverted next Tuesday at reset.

So what are the fastest methods after the change? According to Ebontis, the quickest method now is to participate in public events in the EDZ, which are available to all players. Every time you finish a public event, you can fast travel to the next one and help the players out there. You’ll get a few spectral pages for completing each one, as well as candy for both finishing the public event and killing enemies, but they are faster to get to and complete than the other methods.

Another way to get spectral pages quickly is to complete Vanguard Strikes. You’ll be able to get four to five spectral pages and 350 candy at the end of the Strike, as well as candy for any enemy you kill. These Strikes take anywhere between nine and twelve minutes if you’re used to the Strike and have a good Fireteam behind you. Ebontis recommends Fallen Saber and Devil’s Lair as they’re both more manageable than other Vanguard Strikes. 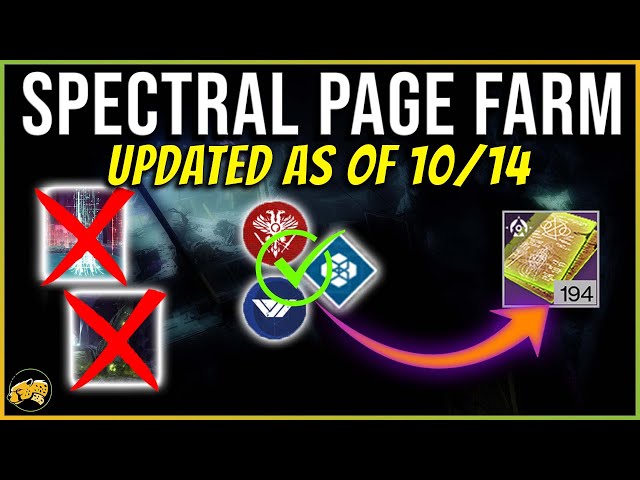 The last method is to participate in The Crucible PvP multiplayer during week one of the event. The Team Scorched game type takes around five minutes to complete, which will give you three spectral pages and 245 candy after finishing the match, as well as a bit of candy whenever you’re shooting enemies. Unfortunately, Team Scorched won’t be here after the next weekly update, so be sure to make the most of it while you can, as the next game may be less efficient.