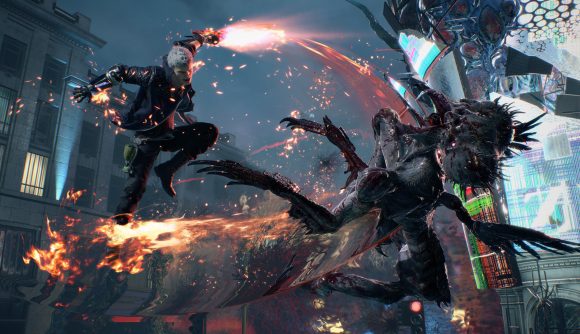 May 10, 2019 Capcom says sales of Devil May Cry 5 have breathed new life into the series.

Back at GDC, we learned that Devil May Cry 5 had sold over two million copies worldwide just two weeks after release. Early DMC5 player counts suggested that the game would be a hit, and sales numbers across all platforms backed that up – now Capcom has told investors these numbers are “successfully reinvigorating” the DMC brand.

In this year’s financial results, Capcom confirmed that DMC5 has shipped two million units (noted by Nibel on Twitter), and that its success means good things for the future of the series. Director Hideaki Itsuno shared the two million figure during a panel at GDC (via VG247), thanking fans worldwide for their support.

It’s worth noting that DMC4 sold only three million copies in its entire lifetime. With just two weeks having passed since release, it’s already looking as though DMC5 is set to smash some of the series’ records. The news doesn’t necessarily come as a huge surprise, however.

When it was first released, Devil May Cry 5 had more concurrent players on Steam than the hugely anticipated Resident Evil 2 remake, and has since received largely positive reviews across the board. Fans had to wait over 11 years to receive the next iteration in the mainline series, but luckily for Capcom, fans seem to feel that the wait was worth it.

Devil May Cry 5 follows Dante, Nero, and new protagonist V as they hack-and-slash their way to stop the demon Urizen. The game features the same glorious mix of style and gore that we fans have grown to love, and includes a wicked soundtrack to boot.