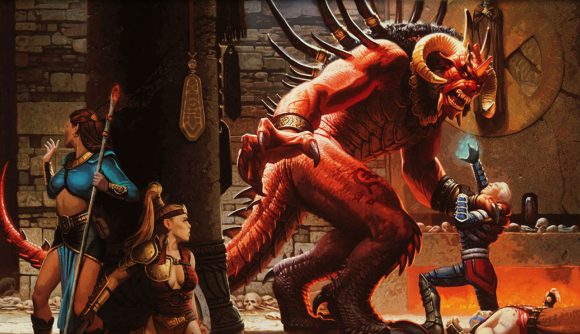 What might a Diablo II remaster look like? Thanks to a modder who goes by zomprd on Reddit, we have a pretty good hint. Zomprd is creating a high-resolution texture pack for Diablo 2, and plans on creating a web application that shows off the upscaled vision of the game.

DSO Gaming spotted zomprd’s post in the Diablo subreddit. Currently, the modder is using ESRGAN, a learning AI algorithm that can generate super high-resolution textures based on low-res original assets. The results are already pretty impressive, and you can look at some side-by-side versions of the Rogue’s Encampment in an imgur gallery zomprd created to showcase the new textures.

The difference is starkest in scenes that contain props like vases and pots, which look shinier and much crisper thanks to the ESRGAN-enhanced textures. In other areas, the effect is subtler but no less nice to look at: the ivy creeping along the edge of the stone bridge really pops with the sharper textures, and the chopped firewood looks much more realistic.

Modders have used ESRGAN to upscale textures in games like Morrowind and Max Payne, but zomprd is making a whole new app rather than simply replacing a texture pack. It’ll be demo-length and run in a browser when work is complete.

Zomprd has also uploaded a series of upscaled animations, which you can view here. These demonstrate several of the different approaches used by ESRGAN, as the results are a bit different depending on the AI model used.

We’ll have to stay tuned to see zomprd’s Diablo 2 prototype in action.