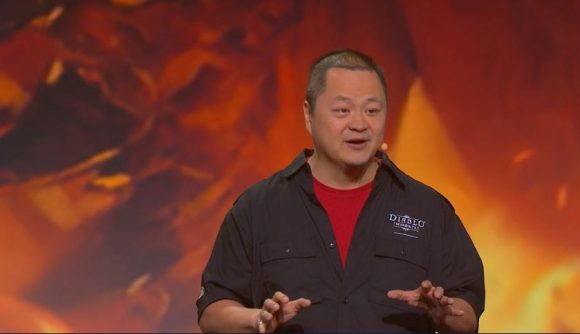 Since its announcement at BlizzCon last night, Diablo Immortal has faced fierce backlash from fans who aren’t pleased with the idea of a mobile iteration of the Diablo franchise and are concerned Immortal represents a new direction for the series. But on the stage tonight in Anaheim, Blizzard’s Wyatt Cheng stopped just short of confirming the existence of Diablo 4.

“We love our Diablo community,” Cheng said. “And our community is a passionate one.”

While he remained upbeat, he was clearly referencing the furor that’s come in the wake of the Diablo Immortal announcement, which he was on stage Saturday night to explain in further depth.

“We have multiple Diablo projects being worked on by multiple teams,” he said, and the crowd cheered. “Diablo Immortal is one of those projects we’re very excited about, but there are others.”

Cheng smiled and pressed on with the panel and Q&A session for Diablo worlds, but his confirmation of multiple Diablo projects in Blizzard’s pipeline – particularly after 24 hours of fan backlash – seems very close to confirmation that Diablo 4 is on the way.

One of the projects Cheng is referring to could be the animated Diablo series with Netflix, but “multiple projects” seems to suggest there are others as well.

It’s not the first time Blizzard has said it has multiple Diablo-related projects in the works. As we reported back in August, community manager Brandy Camel said much the same thing in a video released ahead of Gamescom and the launch of Diablo III on Nintendo Switch.

Naturally, nothing is a sure thing until there’s official confirmation of Diablo 4, and Blizzard has scrapped projects (remember Starcraft Ghost and Warcraft Adventures?) well into development before. The company also is known for taking its time before making announcements or releasing games.

But Diablo fans have been hoping to hear bona fide word of a sequel for years now, and the mobile-bound Diablo Immortal wasn’t what they wanted to hear at BlizzCon. Cheng’s words tonight may be as close as it gets to an official confirmation of a mainline sequel to Diablo III that they get for another year.