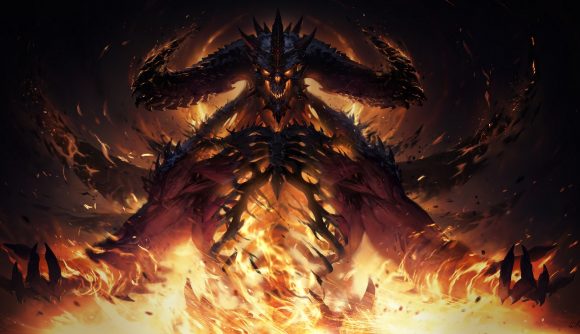 Domino’s Pizza – yes, the pizza joint – has had a jab at the Diablo Immortal reveal during BlizzCon 2018 in a Facebook promotion for its ‘Treasure Chest’ deal.

The Facebook image also has a man – presumably a Domino’s employee – standing in front of a microphone and wearing the same outfit as the audience member who posed the question to the Diablo Immortal developers. Taking it further still, the text in the Facebook post references the reveal event several times:

“No diabolical plans here, we just want to level up your gaming experience! Immortalize your characters with our Treasure Chest Items when you get pizzas from Domino’s! Order here to claim your items quick before DIA BLOW away by a blizzard.”

Blizzard received a huge backlash from fans after the Diablo Immortal reveal. It seems that the reason for this is because many of them were expecting Blizzard to announce either a Diablo 2 remaster or Diablo 4 for PC – instead, Diablo Immortal is a mobile game.

Activision Blizzard’s stock crashed by 7.4% right after the Diablo Immortal reveal seemingly due to the negative reaction it received. However, it has been reported that a Diablo 4 reveal was pulled from BlizzCon 2018 at the last moment.