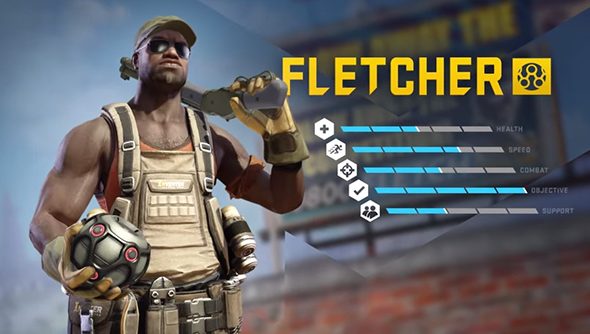 Objective-based team-shooter Dirty Bomb is still in closed beta, but is ushering in updates at a frantic pace that’s sure to concern the neighbours.

The most recent of these updates is an all-new mercenary to play as: the demolitions loving Fletcher. He’s got sticky bombs, which means he’s essentially Team Fortress 2’s demo man.

The guy’s sticky bombs attach themselves to walls, ceilings, objectives and other players and can be detonated at will, allowing him to booby trap doorways and lure enemies to their explo-deaths.

“The only merc with bombs as big as his ego,” shouts the tagline, seemingly overlooking that Fletcher’s bombs are rather small and portable. About the size of a grapefruit really. Maybe Fletcher is remarkably modest? I’m not sure what’s being communicated here.

The Dirty Bomb beta has been offering a carousel of content for attending players, such as a new Execution game mode and map that was trialled earlier in the month. The roster of mercs is slowly being expanded too, and now includes the similarly explosives-focused Nader.

Here are my thoughts on the state of the beta, as well as an interview with two of the chaps behind Dirty Bomb.