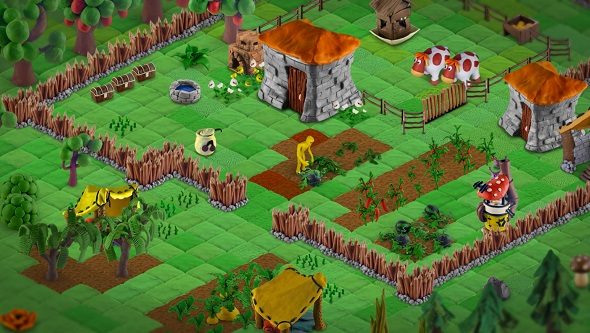 CGI has replaced most traditional forms of animation these days, and that’s okay. But there’s something about the scrappiness of old-fashioned stop motion that has its own unique appeal. Disdoored, a survival game akin to Don’t Starve by Russian animator Anton Riot, is about building a farm and caring for a carnivorous plant, and it’s made entirely out of modeling clay.

There are some familiar beats. You’ll pick up sticks and rocks and fashion them into an axe, then use that to chop down trees. Seeds can be farmed if you craft a hoe and cultivate a soil tile. Eventually you’ll unlock the ability to build more advanced tools and weapons, and you’ll have to construct defenses around your base to ward off hostile creatures.

Check out our list of the best indie games on PC.

But as in Riot’s last game, Don’t Open The Doors, everything you see in Disdoored is made of colorful plasticine. The odd Gumby-style characters, the hostile bugs, and even the menus have been molded by hand and photographed. At some point he added it all up, and Disdoored has used more than 20,000 photos of 20 pounds of clay to create its strange little procedurally-generated world.

Your ultimate goal in Disdoored is to invade and destroy magical doors that have appeared throughout the world. They’re portals to dungeons full of monsters, which range from large angry bees to gremlins armed with rifles. To arm yourself for these fights, you have Lily, a hungry plant who you’ll have to tend to and feed, and will in time provide you with a powerful weapon.

I haven’t gotten to that point in Disdoored. It’s a touch clunky and there’s no tutorial – which is by choice, I’m told, because the developers want you to discover things on your own. It’s certainly a weirdly charming game, with its distinctive hand-molded look and an oddball sense of humor.

It’s available on Steam in early access now, and it costs $19.99 to buy in. It’s worth a look if you’ve ever been a fan of the California Raisins or The Neverhood.