Disintegration is the debut release from V1 Interactive, a studio founded by Marcus Lehto, one of the original co-creators of Halo.

Like Lehto's previous project, it's an action game with a smart science fiction premise: on a near-future Earth, the only hope for human survival is through Integration, a process by which we can preserve our brains in robotic bodies. Some people have decided they prefer to live like this and are bent on wiping out the last remnants of humanity, while a resistance – which you, the player, will support – are determined to 'reboot' humanity and, one day, dis-Integrate.

Besides tackling one of the enduring themes of science fiction, the meaning and value of being human, Disintegration is also looking to redefine action games by blending the first-person shooter with real-time strategy. You hover above the battlefield on a Gravcycle, surveying the fight and giving orders to your troops as well as engaging directly. While Lehto is working with a smaller team than he did for Halo, then, their ambitions are clearly undiminished.

To celebrate Disintegration’s release today, we spoke with Lehto himself about its conception and evolution, as well as the challenges he and his team at V1 Interactive faced in realising such a distinctive idea. If you’re interested in the more technical side of those challenges, you can also check out our Making it in Unreal feature on Disintegration.

PCGamesN: When did you first have the idea to blend RTS with FPS?

Marcus Lehto: When I first started working on Disintegration, it was strictly a traditional RTS with the camera in the sky, while band selecting and micromanaging units on the ground. It was coming along well and interesting to play, yet I knew we needed to do something more to stand out as a unique game, and the standard RTS approach was not going to work.

So, late one night, I had a kind of epiphany, where a vision of how the game could be made unique formed. I wanted us to try making the camera in the sky an active participant in combat with units on the ground. We knew within the first week that we had something worth pursuing and were very excited about continuing developing in this direction.

Has that concept evolved during development?

The core gameplay concept led to months of exploration which clearly identified several other components that would require solutions, such as inventing brand new ways to engage with a limited number of ground units that was much more fluid and contextual and felt natural to the player as they also control their aerial vehicle and fire on enemy ground units.

We had to constantly boil things down to the essentials to keep the core combat loop streamlined and feeling great for the player. What started out as a very unique idea, transitioned through many periods during development, and resulted in an exciting new experience I’m eager for the community to play.

What were your biggest challenges in making it work and how have you overcome them?

One of the biggest challenges was how to make flying a vehicle (we call it a gravcycle) around while shooting enemy ground units, and also have the player issuing commands to ground units and activating their special abilities – all without overwhelming the player by asking them to do too much. 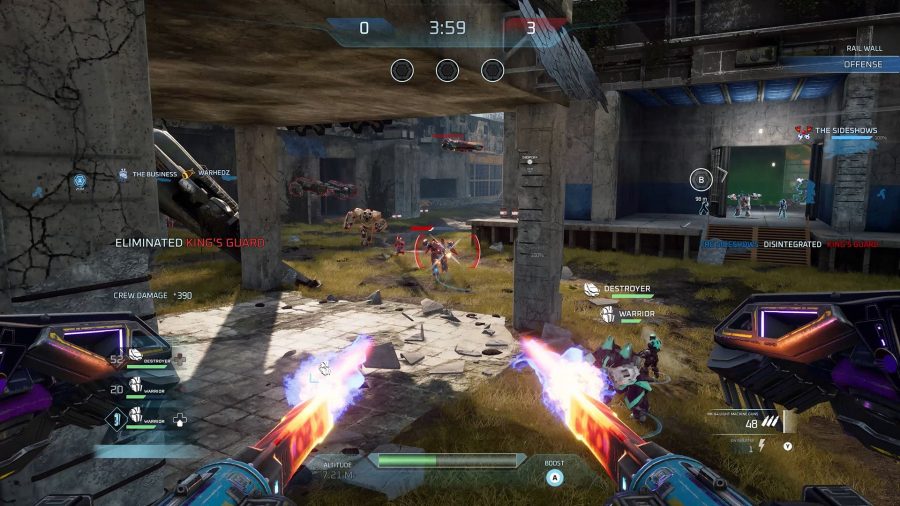 This led to us inventing new mechanics to control ground units. We removed all micromanagement and opted to have the player fire down what we call command pulses onto the ground, enemy units, or on specific objectives. Keeping the unit commanding within the same realm as the first person shooter mechanics of the gravcycle suddenly all felt very natural.

I know. I’ve tried, even during the development of Halo Reach. But I was determined to get away from the awkward turn-based hybrids and really focus on real-time tactics that make Disintegration feel like a much more intelligent shooter, giving the player a variety of ways to approach any given combat scenario.

How does this combined gameplay affect encounter design and AI?

The biggest thing that affected encounter design is that the player is flying a gravcycle which has unilateral movement capability and can hover up to about 16 meters over the terrain. While we bias things to make it beneficial for the player to stay closer to the ground, allowing the player to fly up and around the environment had a huge impact on the types of spaces we built. In addition, we put great effort into making sure that your ground squad is always close at hand, so levels needed to be built specifically for them as well. 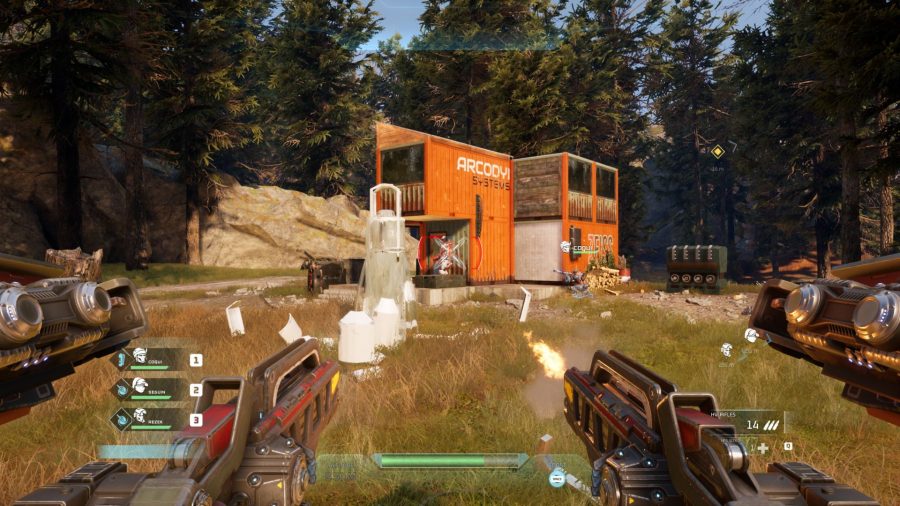 Both enemy and player controlled unit AI took a majority of the project’s development cycle to get right. Our goal was to focus on the believability and spectacle of combat as it unfolds during gameplay. This required us to make intelligent AI that could think on their feet as the situation around them changed.

We had been cooking up new adventures for Master Chief, but it would've required another trilogy to do it justice

When the player issues command pulses down on the ground near enemy units, the squad will run to that spot and intelligently take up contextual spots of cover. That cover can often be destroyed, so as the environment is modified, the AI need to respond to those changes accordingly.

Exciting movement – such as double jumps, mid-air dashes, and ‘blink’ teleports – has been a trend in shooter design lately. Presumably this is something Disintegration hasn’t been able to utilise?

One of the things that got us excited about Disintegration was that we would not chase the tails of all the trendy games out there and instead find elements within the unique architecture of the game we were building and amplify those where it made sense.

What does the gravcycle bring to the mix?

The gravcycle is one of the key elements of Disintegration. The player can pilot a variety of different gravcycles, all with different capabilities and loadouts throughout campaign and into multiplayer. Some gravcycles are equipped to be more supportive of the ground units while others allow the player to engage in much heavier combat. 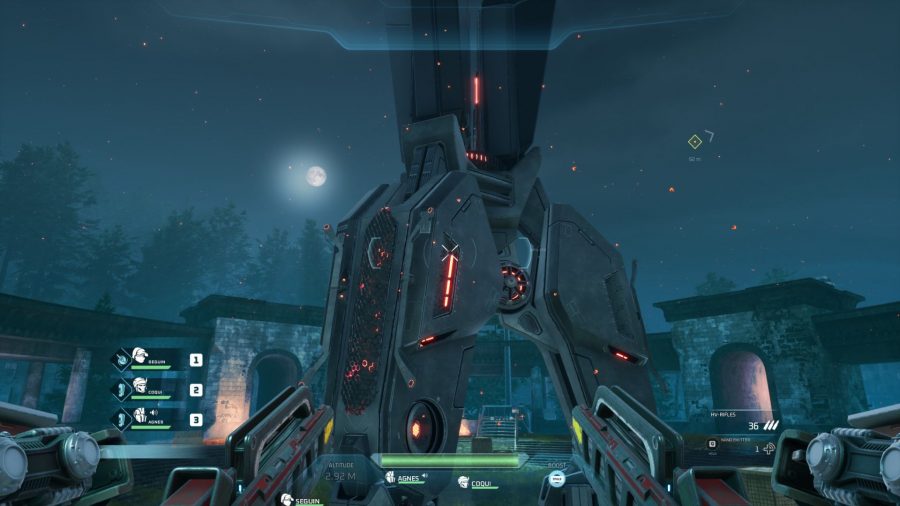 What are the major themes you’re seeking to explore in Disintegration?

What does it mean to integrate your human brain into a robotic armature where you can reinvent yourself, choose any body you wish, even change gender if desired? Also, what does it mean to lose the ability to breath fresh air, enjoy a fine meal with friends, make love, and create new human beings?

Related: Check out the best RTS games on PC

This kind of smart sci-fi, and your own previous work, invites comparisons with Halo. How would you summarise the similarities and differences?

There may be some aesthetic similarities – as a creative director and artist my style has a certain feel to it which can be recognised – but that’s where the comparison stops. Disintegration plays and feels like a completely different game.

Are you comfortable with the pressure of such a lofty comparison?

I don’t mind people asking. That’s natural. I do have to constantly remind people that the team at V1 Interactive is only about 30 people. We’re not a massive triple-A studio. 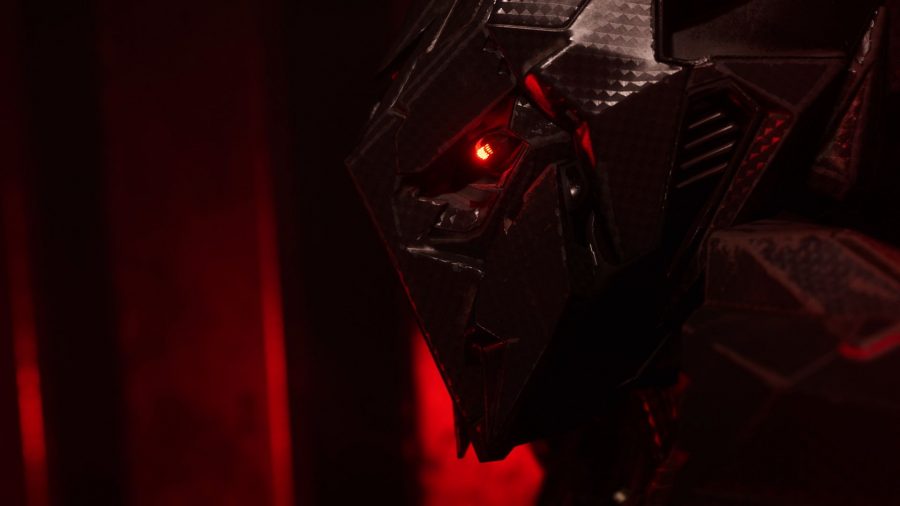 How will the PvP side differ from classic Halo deathmatch? Do you think PvP still works as a sidecar to a single-player campaign, given how much more sophisticated multiplayer shooters have become?

We found that objective type game modes work far better with the type of core gameplay mechanics we’ve designed, so the PvP side of our game is very sophisticated and will take time to master. That said, I believe there has been a serious void in games for years with so much focus put just on multiplayer, and have been pleased with how much of the community is yearning for a great single-player story campaign.

I wonder what George Lucas would think of the places Disney has taken Star Wars. Halo, similarly, was in large part your baby: what do you make of its direction since your departure? Was it tough letting go?

After having worked on building the franchise over 15 years, I was ready to work on something new. However, seeing the franchise taken over by a new studio was tough to watch, but I’m glad 343 did their best to make it their own.

Did you have your own ideas for places to take Halo next, and if so how did they differ? Or had Master Chief’s story come to a natural end?

We certainly did. After Halo 3, we had been cooking up new adventures for the Master Chief, but heading that direction would have required another trilogy to do it justice. That’s when we decided to come full circle and go back to the events prior to the first Halo game and make Halo Reach.