I didn’t realise there was this much scope to improve Doom 2016. Doom 2016 was awesome. But I was so blown away by what I played of Doom Eternal that I was left hungry for more, and went back to 2016, figuring I’d chase down the last few secrets and runes from my first playthrough. The contrast was striking.

Doom 2016 was fast and dynamic. Compared with Eternal, it’s slow and predictable. This is down to Eternal’s more varied, more vertical environments, and the new abilities you have to get around them. Doomguy is now agile as well as just fast, a gymnast as well as a sprinter. The double-jump returns, but now you can also swing from monkey bars, climb walls, and perform sudden dashes, even in mid-air. Sometimes, you’ll jump through glowing tokens that refresh your mid-air dash, enabling you to bounce and blink through multi-layered jumping puzzles like a Hellish pinball.

During three hours with the game across three levels, I saw several such sequences – in one instance navigating a deep canyon, protected by tiers of misfiring electricity. The phrase ‘first-person platforming’ doesn’t inspire the same dread in me that it does in some others, but if you’re one of those others, you should know this is at least a great example of the form.

The ‘meat hook’ shown in trailers, which enables you to fling yourself through space using demons as an anchor, promises to add yet more manoeuvrability later in the game.

In contrast to the flat landscapes and laboratories of 2016’s Mars, Eternal’s Earth is, even in its first three levels, thrillingly varied. If you imagine a toddler having a tantrum with a Lego city, that’s basically what skyscraper-tall demons do to New York in the first level, wading through lakes of lava. The sky is full of red smoke and Hell has fully come to Earth. Level two, by contrast, begins with an almost tranquil poke around a forested stone fortress on mist-wreathed cliff tops before flinging you back into a far more vertical version of Hell than we saw in the first game.

Level three is yet another departure: an infiltration of a cultist castle, secreted amid the snowbound fjords of Greenland. Inside, you’ll find swinging axe blades that you can trigger by shooting buttons. We’ve seen a little of this in trailers, too – environmental traps that you can shoot to thin the herd, albeit with even more gore and brutality than that other Doom essential, the exploding barrel. It’s all immensely ‘gamey’ and not remotely plausible, but anyone who complains about that in an id shooter is missing the point. It’s fun. That’s the point.

Since the iconic boom, clack-clack of the original Doom’s shotgun, id software has been rightly recognised as an industry leader in creating great ‘gunfeel’ – that mysterious alchemy of a thousand tiny, meticulous details that brews videogame guns which you simply can’t stop firing. It’s an integral part of the much-desired power fantasy of first-person shooters, but a spin on Doom Eternal has convinced me that the focus on gunfeel has too often come at the expense of gun impact. 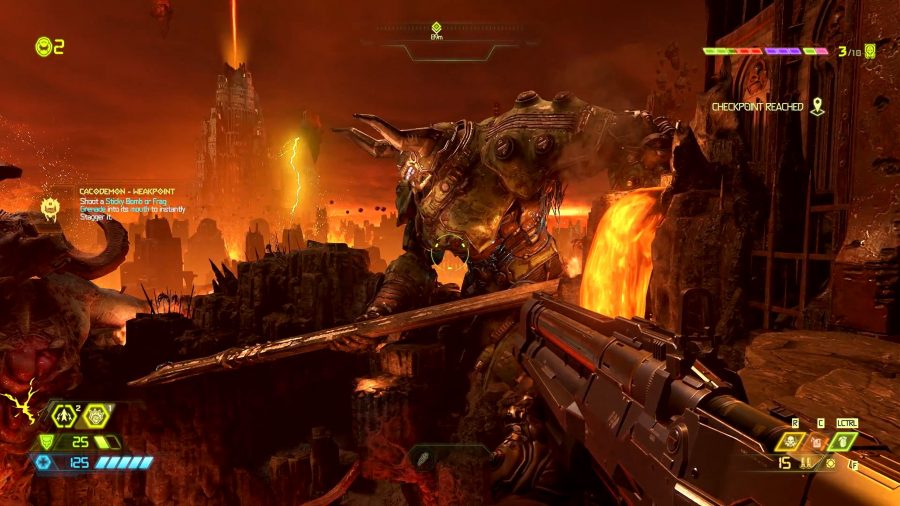 Destiny offers a telling contrast. Bungie is another maestro of gunfeel, but it’s also guilty of creating too many ‘bullet sponge’ enemies – most egregiously, bosses – who soak damage without reacting to it. Pumping endless bullets into Valus Ta’aurc as he walks up and down his land tank, no-selling the damage like Kane during his first run in the WWE, is not empowering, no matter how good my machine gun feels to fire.

Target fixation: Here are the best FPS games on PC

Doom 2016 suffered slightly from the same problem. Tougher enemies like Barons of Hell could shrug off damage as frustratingly as anything in Destiny. Ironically enough, Destiny’s trash mobs are the polar opposite of this – critical hits will blow the Vex apart with a splash of milk and a mechanical whine, or pop a Fallen’s head with a fizz of escaping aether. It feels terrific. So I know Bungie gets it, but Doom Eternal proves that, even with large enemies that the player cannot be allowed to kill quickly, you can still show their guns having an impact. Doom Eternal points the way forward through its destructible demons and its weak point system.

These systems offer both visual feedback to reflect the punch of your guns, and gameplay feedback to reward your own skill as a player. Cacodemons weep blood and mechanical components fall off Arachnotrons, trailing sparks and shrapnel. Most of the larger demons also have weak points that can be specifically targeted. If you shoot both a Revenant’s shoulder guns, for instance, it can no longer fly or attack at range, reducing it to a rather pathetic skeleton that can only run up to you and slap you, lacking any but a hint of its former menace. 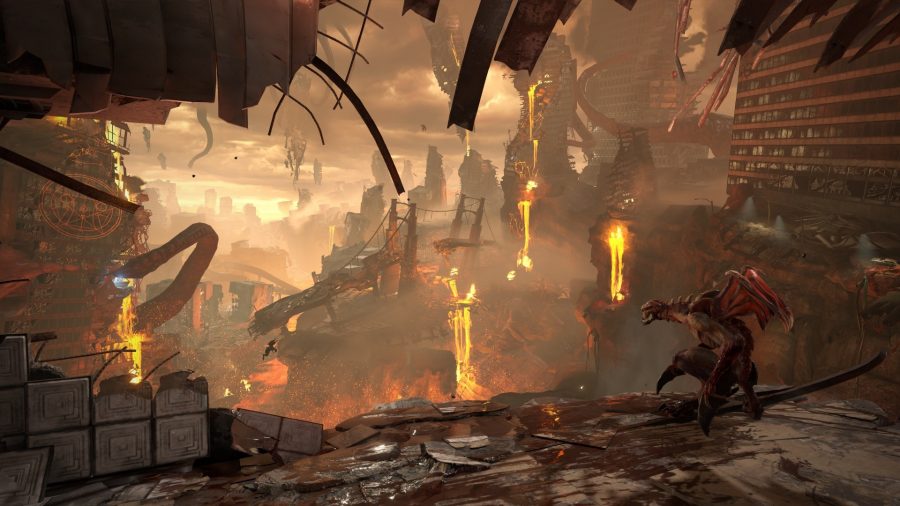 There’s even humour to be found: if you can shoot a grenade into the Cacodemon’s yawning mouth, you’ll not only instantly stagger it, but its eye will bulge in discomfort as if something’s gone down the wrong way. It’ll also make a forced swallowing sound, which is not only funny, but lets you know that the shot has landed. That’s your cue to go pull its eye out with a glory kill before it recovers from the stagger, so it’s useful information from a gameplay perspective, too.

Go to Hell: Get ready for the Doom Eternal release date

The empowerment I get from all this thoughtful enemy feedback shows that power fantasy is a two-way street. As you’d expect, Eternal’s guns are as punchy as ever, with some incremental improvements on those of 2016 – the new plasma rifle recalls the design of that of the 1993 original, rather than the generic weak-sauce we got in 2016, for instance. But Eternal excels not only in making your output feel impactful, but reflecting that impact when it lands on the enemy.

These are the kind of well-considered refinements that, in the original, in 2016, and never more so than here, underpin the essence of Doom: it’s just so flippin’ badass. Of course all the emotional base notes, those that it simply doesn’t do to overthink, are here. Fast and brutal combat; more and sicker glory kills (you can cut demons’ faces in half with their own claws); and a pumping metal soundtrack: I’ve been listening out for the metal choir, but in the meantime I appreciated the sample of Doom 1993’s E1M1 soundtrack in the opening cinematic. 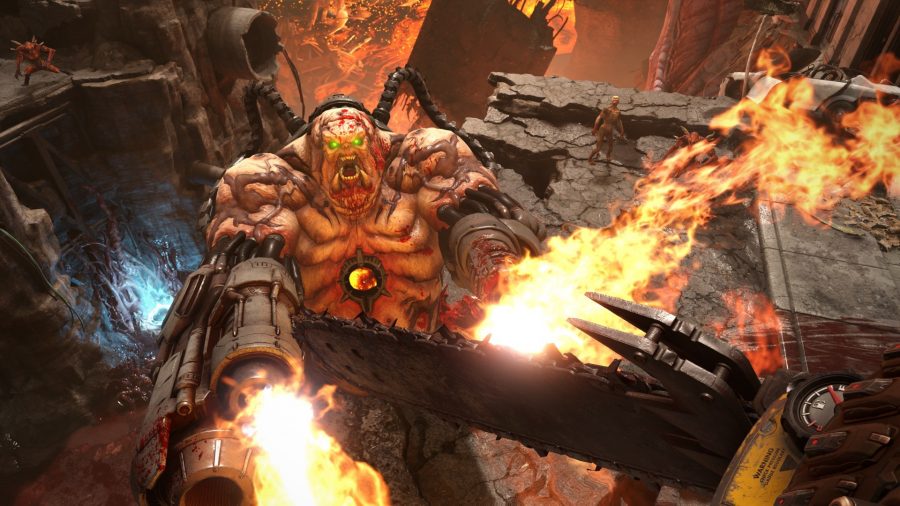 If anything, there might be a little too much going on. New gadgets and abilities are expertly introduced but do come at a brisk pace, and I can imagine some of them either proving redundant or overcomplicating the combat. I’m also not sure about the story. While 2016 did a fantastic job of relaunching the Doom mythos – Olivia Pierce’s character and all the Hellish zealotry within the UAC was suitably and magnificently messed up – what I’ve seen of Eternal’s story so far isn’t really doing it for me.

In fairness, id might be in an impossible situation here. Doom started from the simplest of premises so some embellishment is necessary to meet modern expectations, but when I see the Doom Slayer kneeling – kneeling, I say! – before the ghost of some mythical space monarch who I don’t know or care about, I wonder whether something essential is at risk of being undermined.

But then Doom Slayer turns his back and walks off after the king suggests something as lame as not kicking untold quantities of demon ass. And there’s no question that id still understands the gleefully anarchic appeal of Doom on the strength of the 2016 reboot, so maybe the story stuff will all come together in the finished game – id has more than earned the benefit of the doubt. Studio director Marty Stratton told us he reckons this is the best thing id has ever made, and from what I’ve seen so far, I’m not inclined to dismiss that as a marketing brag. Only two more months until we get to find out.